Going the Extra Mile for GEM

This summer, the Lab hosted a record number of GEM interns: eleven students worked with mentors at NSLS-II, one was assigned to the Center for Functional Nanomaterials, and one was in the Collider-Accelerator Department. 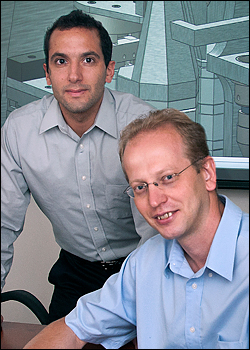 GEM stands for National Consortium for Graduate Degrees for Minorities in Engineering and Science, Inc. Founded in 1976, GEM has graduated nearly 3,000 researchers, professors, entrepreneurs, inventors, and business leaders, including nearly 200 men and women with doctorates in the physical sciences, life sciences, and engineering.

Terrence Buck, principal human resources representative with the NSLS-II Project, has the lead on the Lab’s GEM program, administered through Human Resources and the Diversity Office.

The internship program here has always been solid, but this summer, Buck wanted to “go the extra mile,” as he put it. He did an initial telephone interview with each one of the incoming students to make sure they were familiar with their mentors and the research they would be doing for the summer. “I wanted them to be comfortable about our program,” he said.

On day one here, Buck also scheduled a “meet and greet” at the Center for the students and their mentors. He then organized other after-hour activities, spread through the eleven weeks of the program. “They had a nice social calendar, which helped them bond,” he noted.

As the summer went by, Buck could tell that the students were having a full experience at Brookhaven. Independent confirmation, however, came in the last week, when he took two students to the 2010 GEM Annual Conference and Board Meeting, held this year on August 10-11 in Virginia. 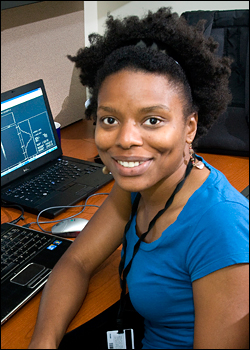 Niaja Farve, third-place winner in the GEM competition. Her mentors are Juergen Thieme and Vincent DeAndrade.

In the GEM Fellow Technical Presentation Competition, Rafael Lozano won the top honor and Niaja Farve came in third. Lozano was mentored this summer by Evgueni Nazaretski and Farve by Juergen Thieme and Vincent DeAndrade. All three mentors work at NSLS-II.

The student competition showcased the technical and research assignments of summer interns. Each competitor gave a 15-minute presentation and then answered questions from a panel of judges representing the National Science Foundation, GEM employers and GEM university members.

Buck, who witnessed the competition among a field of about 25 GEM students from across the country, said that the judges were amazed at how much work the Brookhaven GEM interns were able to accomplish in their time at the Lab. The students and mentors certainly worked hard over the summer, he said, but he also credits the early contact and the close relationships built over social activities that helped keep everyone so productive.

In recognition of his own contributions, Buck was named the 2010 GEM Employer Representative of the Year at the conference.

A year ago, Buck took the initiative to invite GEM Executive Director Michele Lezama to the Lab to hear presentations by GEM students. “She was so impressed by what she saw that she used us as a benchmark for the national competition at the GEM annual meeting,” said Buck.

The Diversity Office’s webpage has information about GEM.