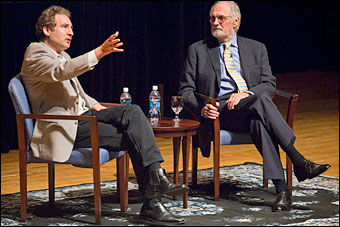 “We live in a world where if we look at the challenges we face and opportunities going forward, it’s all science-based,” said Greene, a professor of physics and mathematics at Columbia University. “We are becoming an ever-more-science-based society. But you can’t have a democracy if there’s a majority of the general public that can’t participate, who can’t have a strong opinion because it’s science and it’s something they don’t want to deal with.”

The event served as the official opening of CCS, which was established in 2009 at the university’s School of Journalism with help from Brookhaven Lab and Cold Spring Harbor Laboratory. Previous workshops hosted by the center have taught scientists how to become better communicators through workshops on writing, TV interviews, and social media; panel discussions; and a series of improvisational theater games developed by Alda.

Alda said he started learning the tricks to telling engaging science stories while interviewing researchers for “Scientific American Frontiers,” which he hosted for PBS.

“What none of us realized at first was that easy conversation allowed the scientist to get out of lecture mode,” he said. “You could see it change in their face, their sense of humor came out. They were just trying to make this dummy understand. But whenever they got into lecture mode, the tone changed. That’s holding back communication.”

Greene, who has written two popular physics novels for the general public, has made appearances on a wide range of TV sets and auditorium stages, and co-hosts the annual World Science Festival in New York City for some 100,000 attendees, said he still finds himself slipping into that lecture mode from time to time.

“I can feel when I’m not really there,” he said. “It’s an uncomfortable feeling.”

But Greene has learned a number of ways to snap back to life, including ignoring scripts altogether.

“I’ve learned to focus on not recalling words but thinking about the ideas,” he said.

Alda seconded that approach, telling the audience that when put in charge of his daughter’s kindergarten production of “Cinderella,” he never let the young actors read their lines. Already familiar with the story, the students were able to really get into character without the stress of memorizing exact words, he said. 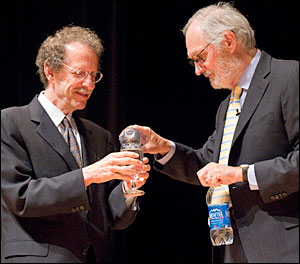 Howard Schneider, dean of Stony Brook’s School of Journalism (left), is tasked by Alan Alda (right) with walking across the auditorium stage in two different scenarios: 1) while holding an empty glass and 2) while holding a glass filled to the brim with water. The demonstration shows how easily you can engage your audience with a simple action by directing all of your energy toward it, Alda said.

Greene and Alda also stressed the importance of telling the drama of science by sharing the “process” of science — the many wrong turns a researcher might make before getting to the “eureka” moment.

“Ninety-nine percent of what we do in science is wrong,” Greene said, meaning that it doesn’t pan out. Most scientists, he said, are trained to write up their studies as a “sequential march toward truth without the dirty stuff.”

“There are lots of scientists in the public eye who feel that they can’t go out there without saying the word ‘revolution,’” Greene said. “We don’t need to do that to get people interested in science.”

To help scientists discuss their love, CCS has started to offer a range of instructional programs for science graduate students and scientists, including seminars, workshops, conferences, lectures, and coaching and mentoring opportunities, as well as credit-bearing courses through the School of Journalism.

For more information, go to http://www.stonybrook.edu/journalism/science