George Redlinger and the Search for SUSY 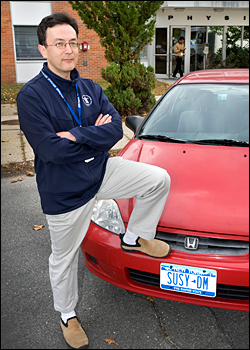 Ask George Redlinger about his car’s license plate — which reads “SUSY DM” — and he’ll be delighted to explain it to you.

“I like the ambiguity,” he said. “SUSY DM could be a woman named Susan advertising her Doctor of Management or her interest in Dungeons and Dragons.”

SUSY DM, however, is no lady.

Google “SUSY DM” and the first thing to appear is supersymmetric (SUSY) dark matter (DM). This is a logical choice for Redlinger, co-coordinator of the supersymmetry search group on the ATLAS experiment. With Pascal Pralavorio of the Marseilles Center for Particle Physics in France, he oversees experimental groups searching for SUSY at the Large Hadron Collider (LHC) at CERN.

Symmetry is beautiful — especially to physicists. In physics, space and time are governed by three principles of symmetry: translational, rotational, and time translation symmetry. In essence, these maintain that the laws of physics are the same everywhere in the universe, in every direction, and throughout time.

By the mid-1960's, these three symmetries were theorized to be the only possible symmetries of space and time. Supersymmetry is a loophole to this theorem, extending space-time symmetry into the dimension of spin, a quantum mechanical property related to the magnetic charge of fundamental particles.

“You extend the symmetry and when you do this, some profound things happen. You're now able to make a connection between the theories of general relativity, which apply to space and time, and quantum mechanics,” Redlinger said. “That’s the Holy Grail of modern physics.”

Supersymmetry posits that all particles have a superpartner related by its spin. These superpartners are the objects of SUSY searches and what Redlinger’s three search groups look for evidence of with the ATLAS detector.

The first group looks for red herrings. They characterize all of the known particles and processes that resemble the decay of theorized superpartners and could trip up the other two groups.

The second and third groups look for evidence of superpartners, but each has a different tactic. One searches with the assumption that these particles will leave direct evidence of their presence in the detector, while the other is on the lookout for particles that do not. In the latter case, physicists infer the presence of invisible particles through an imbalance in momentum as they decay into other particles.

So what does it mean if physicists find superpartners in the ATLAS detector?

“For me, the most exciting thing would be finding this new symmetry. It’s something that would totally shake up the field,” Redlinger said.

SUSY could also be the key to other physics puzzles.

Those invisible superpartners might be the elusive dark matter that physicists have attempted to pin down for decades. In addition, supersymmetry could be used to explain the mass of the Higgs boson, a long-sought particle central to the LHC program. Supersymmetry might even unify our understanding of nature’s fundamental forces, much like the late 19th century realization that electricity and magnetism were manifestations of the same electromagnetic force.

With the possible exception of a few hints from Brookhaven’s Muon g-2 experiment however, no experimental evidence of supersymmetry has been found in roughly three decades of searching. Yet physicists keep looking.

“Supersymmetry is such a beautiful idea that, to paraphrase Einstein, it would be a shame if nature did not take advantage of it,” he said. “Even if we don’t find supersymmetry at the LHC, I would still think it’s out there. We’re just missing something important about how it relates to today's universe.”

Redlinger first came to BNL in the 1990’s, while collaborating with Canadian laboratory TRIUMF in the search for rare kaon decay. The search techniques, which he conducted at BNL’s Alternating Gradient Synchrotron, had much in common with SUSY search techniques. It was BNL theorist Frank Paige who hooked Redlinger onto the SUSY search after he joined the ATLAS experiment in 2005.

Redlinger received his bachelor’s degree in physics from Johns Hopkins University and pursued graduate work at the University of Chicago, conducting research at Fermilab’s Tevatron accelerator.

“I remember professors telling me when the Tevatron’s collisions started that this was it,” he said. “We were going to find the Higgs boson, supersymmetry, all of these things that now we’re saying we’ll find at the LHC.”

Now, he is more aware than ever of how tantalizingly close they might be to discovery. If superpartners exist at a mass just a little bit greater than what the Tevatron has attained, the data from the LHC may already contain signs of SUSY.

“There’s a chance that we’ll be lucky,” he said. “We’ve already collected a huge amount of data and we’re working furiously.”