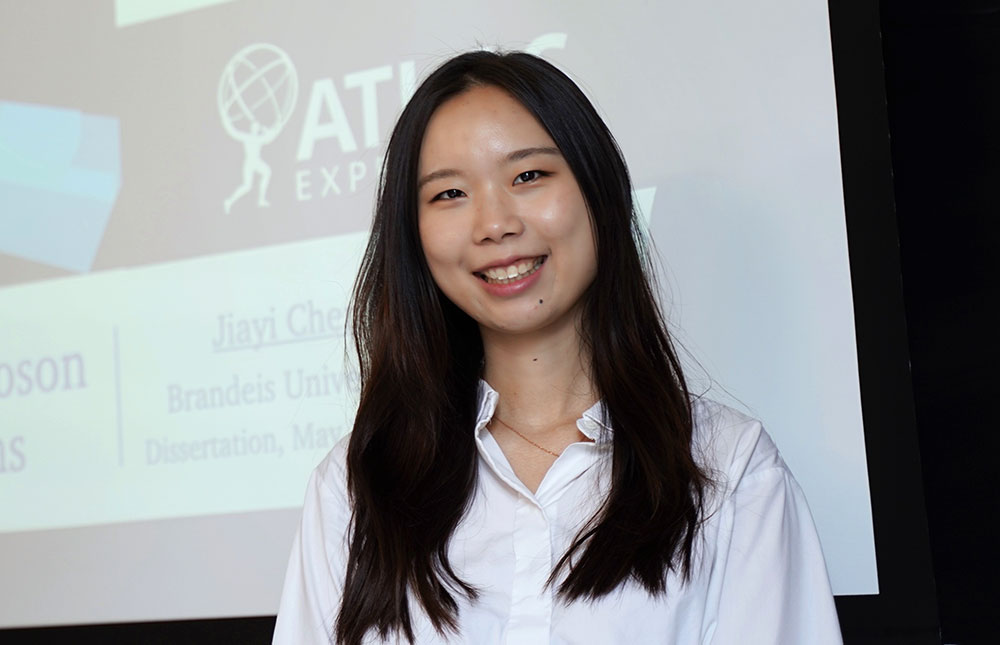 Brandeis University graduate student Jiayi Chen has been named the winner of the 2022 Gertrude Scharff-Goldhaber Prize, consisting of $4,000 and a certificate. Partially funded by Brookhaven Science Associates (BSA), the company that manages Brookhaven National Laboratory for the U.S. Department of Energy’s Office of Science, the award was established in 1992 by Brookhaven Women in Science (BWIS), a nonprofit organization that supports and encourages the advancement of women in science.

The prize ceremony will be held online on Friday, June 24, at 4 p.m. via Zoom videoconference. Chen will give a talk titled “Unveiling new physics signature with the Higgs boson and the ATLAS detector,” followed by a question-and-answer session. This online event is free and open to the public.

“My dream to become a scientist was planted at an early age by my family and reinforced when I conducted my first particle physics project at CERN,” Chen said. “I still get blown away whenever I stop and think, ‘I work with the world’s most powerful and largest apparatus to measure the smallest unit particles in the Universe.’ I am extremely grateful to receive this prize, in honor of Gertrude Scharff-Goldhaber, who established an example for young female scientists like me.”

Chen received a Bachelor of Arts in physics at Boston University before embarking on her graduate work on the ATLAS experiment with Gabriella Sciolla and Craig Blocker at Brandeis University. Chen’s study of the Higgs boson began in the summer of 2018 under the supervision of Alessandro Tricoli and Gaetano Barone from Brookhaven Lab. She has been working at Brookhaven on the development of a new silicon-based inner tracker for the ATLAS experiment at the Lab in collaboration with Brookhaven’s David Lynn, Gerrit van Nieuwenhuizen, Stefania Stucci, and Tricoli. Chen will continue her research on the ATLAS experiment as a Postdoctoral Research Fellow at Simon Fraser University, Vancouver.

Their support, and this year’s donors, enable BWIS and the Laboratory to attract, develop, and retain a diverse and inclusive workforce in the pursuit of world-class science.

You can join the online ceremony on Zoom.