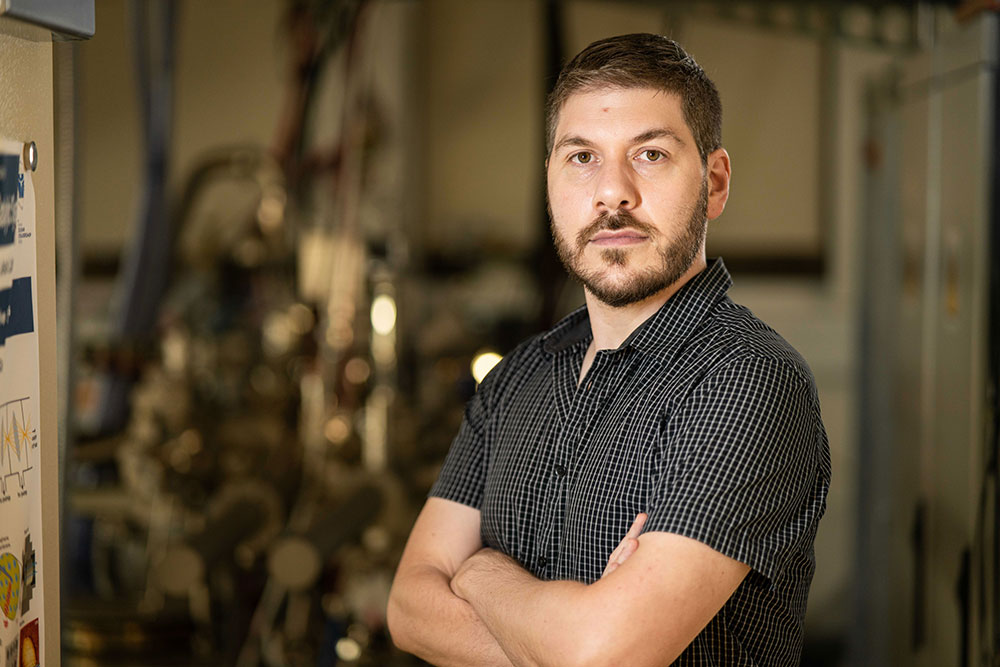 Researchers from the Weizmann Institute of Science and the U.S. Department of Energy’s (DOE) Brookhaven National Laboratory have investigated the molecular-level dynamics at play when methanol converts to hydrogen via the help of a copper catalyst, with the whole system under ambient pressure and temperature. This study, which yielded some surprising information about the behavior of the methanol on different copper surfaces, will help researchers find the best-performing copper catalyst for this process and, more broadly, further their understanding of copper catalysts as a group.

Methanol (a compound of hydrogen, carbon, and oxygen) is a versatile material in the energy industry. It can be used as a fuel itself or, as in this research, to produce another fuel: hydrogen. Methanol is a leading candidate for hydrogen storage technologies, particularly in automobile fuel-cell applications. A liquid at room temperature, it is easy to work with and compatible with the existing gasoline infrastructure. It also holds a relatively large amount of hydrogen by volume. But to efficiently produce hydrogen, methanol requires the help of a catalyst as well as a relatively high temperature.

In this study, described in the June 14, 2022 online edition of ACS Catalysis, the Weizmann and Brookhaven researchers studied a methanol/copper system—methanol vapor bound, or “adsorbed,” onto a surface of copper—that did not require a high temperature. They focused on “methanol decomposition,” the simplest of the four reactions that can produce hydrogen from methanol. Among the possible catalysts for the reaction, those based on copper (Cu) are considered the most promising. This is due to several factors, including its favorable electronic structure for catalytic activity and relative low cost and environmental safety compared to other metals. To better understand the role of Cu, it is essential that scientists gain a thorough molecular-level understanding of the interaction between methanol vapor and Cu surfaces. 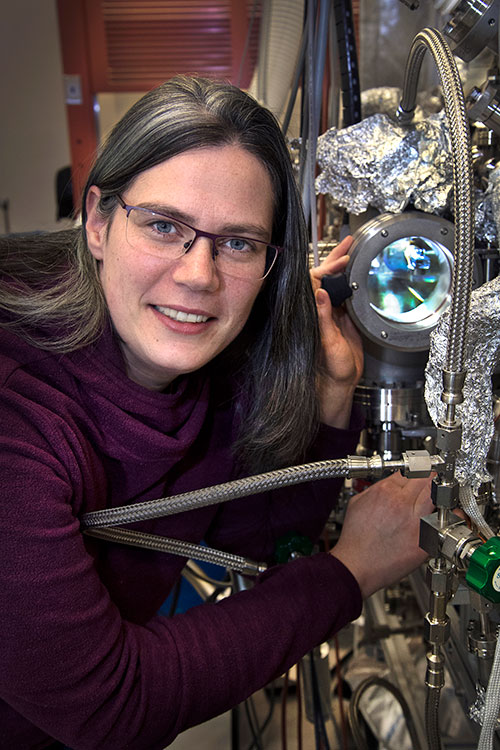 Researchers from Weizmann and the Center for Functional Nanomaterials (CFN), a DOE Office of Science User Facility at Brookhaven, looked at three Cu surfaces to learn how the methanol adhered to them and how it behaved. These three surface geometries are commonly investigated as catalysts due to the way that the Cu atoms are arranged, which makes them more available to electronically interact with other compounds. The group found that the methanol acts in unexpected ways on all three surfaces.

“The trend we saw across all three surfaces was that a lot of methanol adsorbed at first, then broke apart into different components that desorbed. After some time, the methanol coverage reached an equilibrium point,” said Ashley Head, a researcher in the Interface Sciences/Catalysis group at the CFN and one of the paper’s authors. “We had not seen this behavior before and didn’t expect to.”

To study the dynamics of this, the group used both infrared (IR) and X-ray spectroscopy techniques, the latter performed at the CFN.

The IR work, conducted at Weizmann, yielded information about what chemical species of methanol formed on the Cu surface by measuring how the molecules vibrate. The specific vibrations can be linked to specific compounds.

The IR data indicated that the methanol adsorbed onto the copper heavily and formed a direct bond with the Cu, forming a chemical component known as methoxy. The methoxy coverage then gradually decreased. This behavior was seen across all three surfaces, with minor variances. 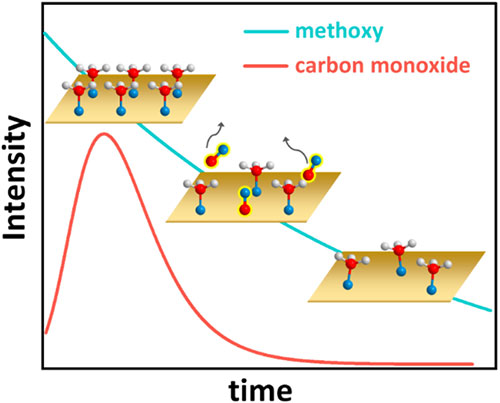 This figure depicts the surprising kinetic behavior of the methanol-on-copper system, with hydrogen atoms shown as white spheres, oxygen atoms as blue spheres, and carbon atoms as red spheres. Initially, methanol thoroughly covers the copper (Cu) surface (top left graphic). Each methanol molecule then loses a hydrogen atom and forms a chemical bond to the Cu, becoming a carbon-oxygen species known as methoxy. The surface methoxy, in turn, reacts to form carbon monoxide (CO), which desorbs from the surface (center graphic, with CO coverage over time represented by the red line). The methoxy coverage then steadily decreases (lower right graphic and blue line). Eventually, an equilibrium methoxy coverage is reached (not shown).

“These dynamics do not agree with what well-established models of this system tell us we should see,” said Baran Eren, a researcher in the Department of Chemical and Biological Physics at Weizmann and the paper’s corresponding author. “Instead, the evolution of the methoxy coverage with time follows an extraordinary adsorption kinetics model.”

He continued, “We propose that a short-lived form of methanol bound to hydrogen is the source of the initial dense methoxy layer.”

The information gleaned from the IR data was confirmed at CFN, where the group used X-ray photoelectron spectroscopy (APXPS). In this technique, x-rays energize electrons in a sample, causing them to break free. Those ejected electrons carry valuable information. In this case, they provided additional insight into the methanol’s behavior on the Cu surface, and the surrounding conditions, in real time. APXPS allows researchers to more easily calculate molecule coverages on surfaces than IR spectroscopy.

As time passed, the excess methoxy was eliminated as more and more hydrogen was produced, leaving carbon monoxide that de-adsorbed from the copper as a gas. The methoxy that was left reached a point of even coverage—an equilibrium point. Notably, the kinetics of this process were considerably faster on the more loosely packed Cu surface compared to the other two, which are more densely packed.

In future work, the group plans to continue studying methanol/Cu systems to learn more about their dynamics and whether some of these behaviors could be found in systems other than methanol on Cu.