A go-kart, scholarship, and internship at Brookhaven Lab fueled his love for machines of the grandest scale

As particles called ions circulate around the 2.4-mile circumference collider, they have a tendency to heat up and spread out. That spreading can be a problem for scientists trying to steer the ions into head-on collisions for nuclear physics experiments at this DOE Office of Science user facility.

“Keeping the beams cool and tightly bunched maximizes the rate of collisions and therefore the amount of data scientists can use to make discoveries,” Brutus said.

Some of the cooling strategies being implemented at RHIC can also be adapted for the construction of the future Electron-Ion Collider (EIC)—a facility that will collide electrons with ions to reveal the particles within these building blocks of matter. When completed early in the next decade, the EIC will be the only particle collider of its kind in the world.

“Research and development (R&D) had always piqued my interest,” Brutus said. “But helping design components for this unique facility—where scientists from around the world will make discoveries for decades to come—is exceptional and tops the list of ideal career paths I could take as a mechanical engineer.”

Brutus took an interest in engineering from a young age. Growing up in Haiti, he recalls how he and his brother shared a passion for motorsport.

“My brother Christian wanted to buy an all-terrain vehicle, but my parents were against it,” Brutus said. “So, he decided to build one on his own. As a supportive brother, I helped him with the fabrication process.”

Once he inherited the go-kart a few years later, Brutus dove deeper into learning how it worked and how to fix it—gaining hands-on design, building, and maintenance experience that he still uses on the job today. 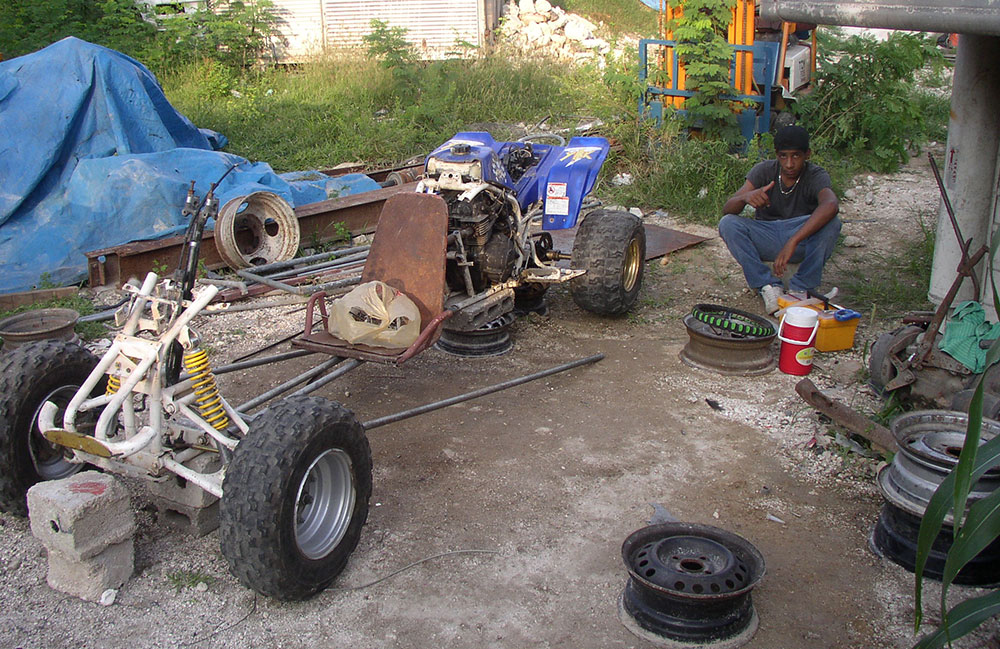 A teenage Brutus helping his brother build the ATV-turned-go-kart.

After moving to Long Island in 2006 to finish high school, Brutus drew on these experiences to pursue a degree in mechanical engineering. He had aimed to study at Stony Brook University (SBU) but was rejected when he first applied to their highly competitive mechanical engineering program.

“I was devastated, and I started to become doubtful about my future,” he said.

Instead, Brutus attended Suffolk County Community College (SCCC). At Suffolk, he became heavily involved in the school’s science, technology, engineering, and mathematics (STEM) program. After one year, he earned a STEM scholarship and transferred to his program of choice at SBU.

The community college detour turned out to be “one of the best paths I could take at the time,” Brutus said. “The STEM program at SCCC gave me an edge with a scholarship and a large network that I still keep in touch with.”

That same network led to an internship at Brookhaven Lab in 2009. As an intern of the Science Undergraduate Laboratory Internships (SULI) program, Brutus learned all about particle collider and accelerator technologies while working under Joseph Tuozzolo, now the Technical Systems Division Director for the EIC.

“Cliff was a can-do type of intern,” said Tuozzolo. “He was always on-time and attentive, and willing to consider alternatives to improve his projects.” 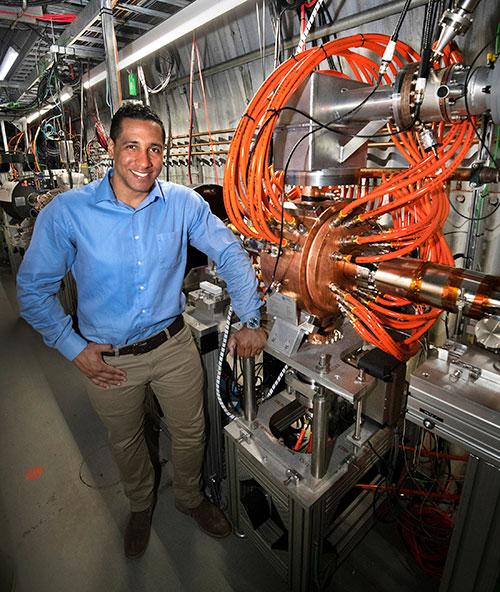 Brutus standing next to a warm radiofrequency cavity he helped design for the LEReC experiment at RHIC.

Brutus went on to intern for General Electric (GE) Transportation in 2010. Despite being offered a full-time job at GE, Brutus felt a strong desire to complete a master’s degree at SBU in 2012 and return to Brookhaven Lab.

“I reached back out to Joseph, saying that I was interested in coming back because it was the most impactful internship I had,” said Brutus. He returned to Brookhaven, first under a co-op position in 2011, and transitioned to a full-time engineer position in 2012.

“I was very happy that he considered BNL after finishing his master’s,” said Tuozzolo. “He hit the ground running when he came on board and has always strived to go faster.

At Brookhaven, Brutus has been designing, fabricating, testing, and commissioning accelerator components for the Coherent Electron Cooling (CeC) and Low Energy RHIC Electron Cooling (LEReC) experiments, which aim to improve the performance of RHIC and the EIC.

“The types of equipment used in a particle accelerator are complex,” said Brutus. “As a mechanical engineer working in such a facility, you get involved in all aspects. We help design electron sources, radiofrequency (RF) cavities, magnets, diagnostics devices, cryogenic systems, control systems, and more.”

Brutus uses an array of tools, including computer software that models accelerator components in three-dimensions and performs engineering design analyses through electromagnetic, thermal, and structural simulations.

“There are many technical challenges when working with superconducting materials operating at a temperature of 2 Kelvin (-456 degrees Fahrenheit),” he said.

Brutus is also responsible for the overall planning, scheduling, and operational support for the experiments he leads as a Project Engineer, keeping his projects within budget, on-schedule, and meeting physicists’ expectations.

“You could spend several months having meetings and designing a project on a computer,” he noted. “Many times, we have several design iterations going back and forth between what the physicists want and what can actually be manufactured.”

“But when we finally build, install and commission projects, it is very rewarding and exciting to see your design being used for scientific research,” he said.

Paying It Forward and Reaping Rewards

Brutus also enjoys opportunities to pay his experiences forward. He mentors SULI students and serves on the Diversity, Equity, and Inclusion Council for the Nuclear and Particle Physics Directorate (NPP) at Brookhaven Lab, where he helps develop initiatives to improve the culture of NPP. 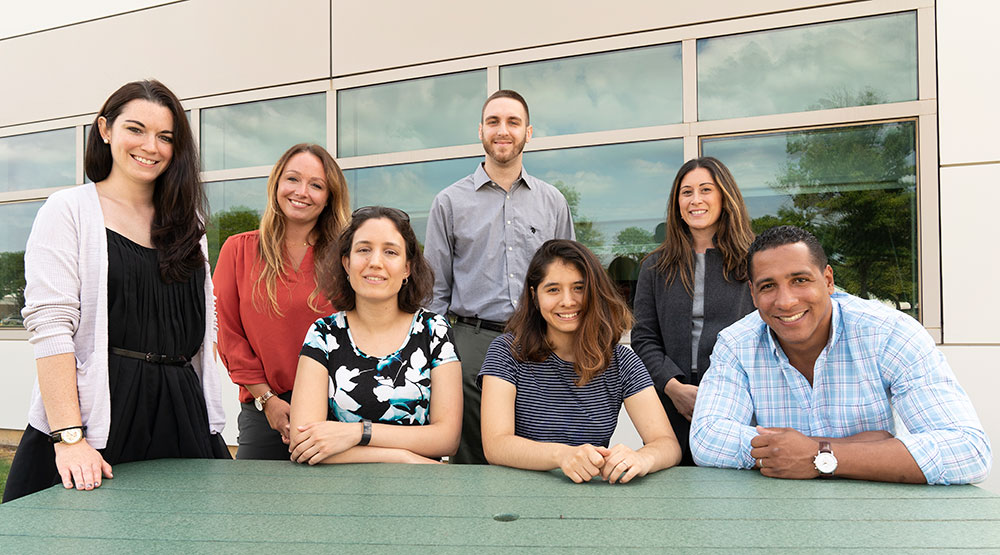 In 2016, Brutus earned his Project Management Professional (PMP) certification. And, in 2018, he achieved his life-long goal of becoming a licensed New York State Professional Engineer (PE).

He was featured on the cover of Minority Engineer in 2019 and is a two-time recipient of the Brookhaven Lab Spotlight Award.

In 2021, Brutus was honored as one of Stony Brook University’s 40 Under Forty Award—a recognition of alumni who have distinguished themselves as leaders in their communities. 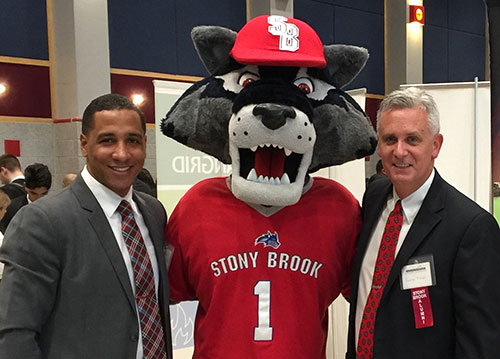 “It is a great honor to represent SBU, Brookhaven Science Associates, and my family,” said Brutus. “This is a reflection of my passion to support science and discovery, to help others and the values I believe in.”

Appreciative of the opportunities given to him as a student and as an engineer, he offers this to those just starting out:

“I advise them to always better themselves—as a person, as a leader, and as a collaborator,” he said. “Always challenge your yourself and be willing to learn from your mistakes as well as from others of different backgrounds and cultures in order to grow professionally.”

The SULI program and projects at RHIC and the EIC are funded by the DOE Office of Science (WDTS, NP).