The following news feature was originally published by CERN, the European Organization for Nuclear Research, home to the Large Hadron Collider (LHC). Scientists from the U.S. Department of Energy's Brookhaven National Laboratory play multiple roles in the research at the LHC and are making major contributions to the high-luminosity upgrade described in this feature, including the development of new niobium tin superconducting magnets that will enable significantly higher collision rates. For more information about Brookhaven's roles in the high-luminosity upgrade, contact Stephanie Kossman, (631) 344-8671, skossman@bnl.gov.

A full-size, US-produced HL-LHC quadrupole magnet based on niobium–tin technology has passed a critical endurance test, another step towards confirming the technology's viability inside accelerators 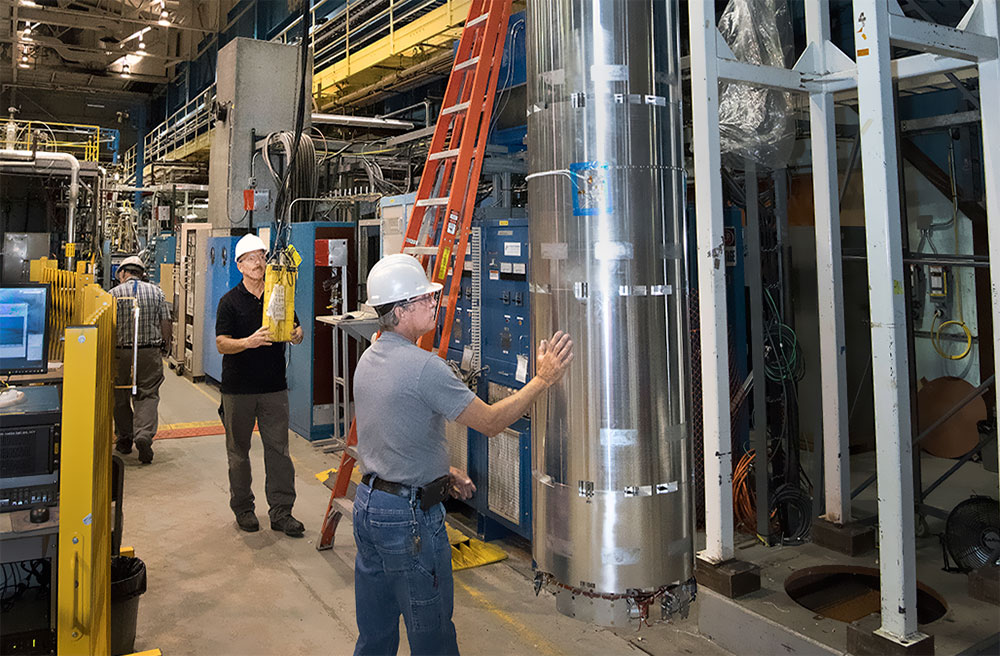 The MQXFA05 magnet at Brookhaven National Laboratory for its endurance test.

Future accelerator projects, including the high-luminosity upgrade of the Large Hadron Collider, will rely on niobium–tin (Nb3Sn) alloys for their superconducting components, such as electromagnets. The higher superconducting abilities of this material will be key in increasing the performances of our discovery machines, but stringent tests are necessary to demonstrate the resilience of niobium–tin components, as the alloy is known to be more brittle than niobium–titanium, of which current LHC components are made. This makes the endurance test of a full-size superconducting magnet based on niobium–tin technology at Brookhaven National Laboratory, in the United States, a critical step on the road to the HL-LHC. Following similarly successful tests on shorter versions of the magnet, this test’s positive results further confirm the viability of niobium–tin magnets in the trying environment of particle accelerators, heralding clearer skies for the High-Luminosity LHC (HL-LHC) project and beyond.

The magnet in question is one of the triplet quadrupoles that have been produced and tested in the United States as part of a collaboration with CERN that foresees the contribution of a total of 20 magnets for the HL-LHC. These 4.2-metre-long superconducting magnets, along with their longer counterparts currently being prototyped at CERN, will focus proton beams more tightly around the ATLAS and CMS collision points to allow the ten-fold increase in integrated luminosity (the number of collisions) targeted by the HL-LHC.

Cold, warm, cold, warm, cold, warm … over the course of two years, the quadrupole endured five thermal cycles, three of which took place in the spring of this year. Each of these cycles subjects the magnets to a 300 °C excursion in temperature: down to 1.9 K – the temperature needed to unleash their superconducting abilities – when in operation and back up to room temperature, to which magnets are regularly brought for technical operations. This process is known to be demanding for magnets, whose materials expand and contract differently with the temperature change. The niobium–tin quadrupole went through five of these thermal cycles without any sign of performance degradation.

Thermal cycles are just one part of the picture: resilience to quenches makes up the other part of the endurance requirements, as tested at Brookhaven. A quench is an irreversible transition from superconducting to normal state, during which the energy stored in the magnet has to be safely dissipated throughout the whole winding, bringing it to room temperature. In April and May 2022, concurrently with the last two thermal cycles, the magnet underwent two provoked quenches every working day, for a total of fifty quenches in two months. Magnets are designed to be able to withstand such events, but testing their resilience is key to ensuring smooth operation of the accelerator. And after the quench heater was fired fifty times on the innocent quadrupole at Brookhaven, it turned out good as new.

“This is the first endurance test successfully carried out on an Nb3Sn 4.2-m-long magnet, and I am happy to announce that the results are further validating this technology’s resilience and sustainability”, explains Giorgio Apollinari, head of the Accelerator Upgrade Project (AUP) at Fermilab. Besides establishing the magnet’s endurance, the tests revealed that it was able to maintain its operational peak field of 11.4 T up to 4.5 K, which gives the magnet a margin of operation far exceeding the requirements imposed by the collision debris heat coming from the ATLAS and CMS experiments.

“We asked that these tests be performed earlier than anticipated in the original schedule because of the special scrutiny under which niobium–tin technology is standing, and our American friends have delivered. For this, for their responsiveness and adaptability, we are extremely grateful”, smiles Ezio Todesco, who is in charge of the HL-LHC interaction region magnets. The openness and trust between the European and American scientific communities was key to delivering this achievement, and the decision to build the same magnets on both sides of the ocean proved once more to be the right way to go, as both sides could learn from the other’s achievements and challenges.