The Goldilocks of Radioisotopes, Just Right for Treating Cancer 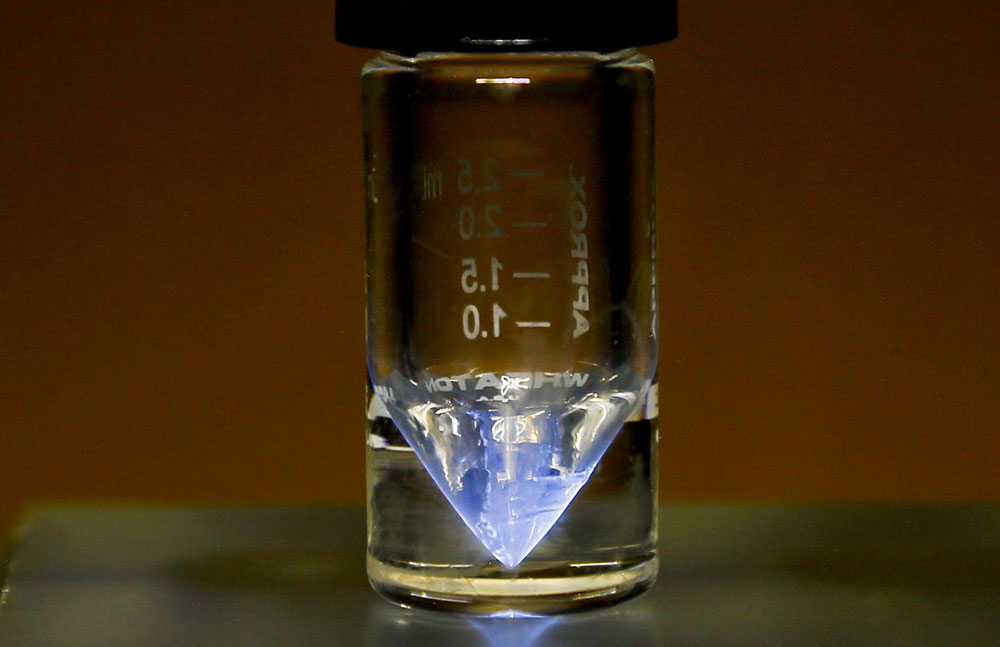 A vial of actinium-225, a potential "Goldilocks" of isotopes that's "just right" for fighting some tough cancers. (Credit: Photo courtesy of Oak Ridge National Laboratory and U.S. Dept. of Energy)

Cutting across demographic and geographic lines, cancer remains the second-leading cause of death in the United States. According to the National Cancer Institute, more than one in three men and women in America will be diagnosed with cancer at some point in their lives. Of those deaths, prostate cancer claims more than 40,000 lives every year. Each person lost to cancer is a tragedy for them, their families and their communities.

But there’s a powerful new tool to reduce the harm cancer inflicts: a purple, glowing radioisotope called actinium-225, which can be attached to molecules to target cancer in the human body. Tested in worldwide clinical trials against advanced metastatic prostate cancer, the radioisotope has proven effective in eliminating cancers. Actinium-225 is produced in nature, but getting a significant amount of purified material demands an accelerator or nuclear reactor and the facilities and expertise to chemically separate out the actinium-225 from the potentially hundreds of isotopes created during production.

That’s where Los Alamos, Oak Ridge and Brookhaven national laboratories come in. As part of the Department of Energy Isotope R&D and Production Program’s Tri-Lab Research Effort to Provide Accelerator-Produced Actinium-225 for Radioimmunotherapy, these laboratories are playing a crucial role in producing this potentially life-saving nuclear medicine.

An isotope is a version of an element with more or fewer neutrons than the element we may know from the periodic table. Isotopes are incredibly useful as part of everyday items such as smoke detectors, as well as components of battery systems in space exploration vehicles and as tools for detecting explosives in luggage screenings, among other uses. The medical field benefits immensely from the use of radioisotopes, particularly to enable medical imaging, research medicines and, critically, fight diseases like cancer.

Radioisotopes are unstable isotopes; they emit radioactive particles or light rays (or both) as they decay, turning into another isotope or even another element as they shed a certain amount of particles. The amount of time it takes an isotope to transform like this is known as a half-life. Because of the types of energy they emit, radioisotopes can damage living tissue. But that destructive capability can also be unleashed against cancer cells.

Actinium-225 could be thought of as a “Goldilocks” of isotopes — it is “just right” for fighting some tough cancers. Produced when a hockey puck-sized sample of thorium is bombarded with a proton beam traveling nearly half the speed of light, actinium-225’s half-life of just 10 days is ideal for production and international-level distribution. Produced in places such as the Isotope Production Facility at the Los Alamos Neutron Science Center, actinium-225 emerges not too “hot” (not so radioactive that it loses its radioactivity before it can be used), and not too “cold” (not radioactive for so long that it poses a significant health or waste challenge).

Once produced, how does it fight cancer? Again, this isotope may be “just right.” It emits alpha particles, the bowling balls of the atomic world: destructive, but unable to go very far. Alpha particles are big enough to destroy the DNA in cancer cells, killing them for good. The alpha particles are also slow enough that they only travel the length of several cells, limiting the damage to other nearby tissues. After its 10-day half-life, actinium-225 decays into several other radioisotopes before becoming inert.

How the radioisotope is targeted at the cancer is another marvel and owes a great deal to the collaboration between nuclear and medical research teams in the Department of Energy Isotope Program. Some cancers, including prostate cancer, leukemia, colorectal cancer, melanoma and others, produce a specific antigen, a molecular structure that attracts a specific, matching antibody, a blood protein that is a natural part of the body’s immune response.

An exacting and newly refined process can bond actinium-225 to a cancer-antigen-matching antibody, or peptide, a short chain of amino acids. When this radiological medicine is injected into the body, the combination searches out the antigen and its cancer. The “bowling ball” alpha particles of the actinium-225 then go to work on the cancer.

This treatment is like a very sophisticated chemotherapy, which unfortunately can inflict its damage on not just the cancer but on any fast-growing cells, such as in the hair, skin and intestines. Avoiding that collateral damage is promising. In a recent mini-trial of prostate cancer patients, actinium-225 offered confidence-inspiring results in treating even metastasized and late-stage cancers.

Currently, we’re producing actinium-225 in small quantities at Los Alamos. The Department of Energy has recognized the emerging need and is supporting many initiatives to increase production quantities to meet market demand for trials and experimental drugs. The fact is, the research community needs a bigger, readier supply of actinium-225. With global events roiling international supply chains of radioisotopes, we have a strong need for more production capacity here at home.

Survival rates for a cancer diagnosis are improving, but slowly. The further development and implementation of nuclear medicine like actinium-225 treatment offers another tool to help in the battle against this disease.

This story was written by Kirk Rector, the Program Manager for the Isotope Program at Los Alamos National Laboratory.