Many chemists want to speed things up — faster reactions can produce higher yields. But Brookhaven National Laboratory chemist James Wishart would rather slow some reactions down. He studies syrupy materials known as ionic liquids, liquids composed entirely of positive and negative ions. Unlike solutions of ions (e.g., sodium and chloride) dissolved in some other liquid, ionic liquids are more like melted salts, with higher viscosity than ordinary solvents. Molecules and electrons move more slowly through them, and they react to the movement of charge more slowly. That gives Wishart a chance to “see” reactions as they happen — and allows new reactions to take place.

Wishart’s goal is to understand how these syrupy solvents and their slower chemistry could be useful for a wide range of applications — from helping to sort out and dispose of nuclear waste to devising more efficient ways of using solar energy.

“In many of these potential applications, ionic liquids will be interacting with light and other forms of radiation — and the highly energetic chemical species resulting from these interactions,” Wishart said. “So it’s essential to understand these interactions to be able to predict how ionic-liquid-based devices and industrial scale systems will perform under conditions of extreme reactivity.” 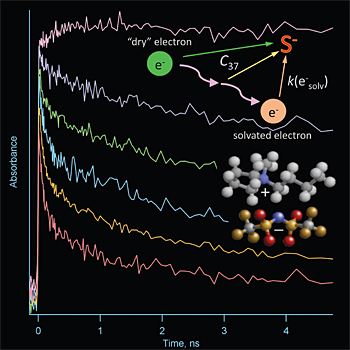 Because of his expertise, Wishart was recently invited by the Journal of Physical Chemistry Letters to submit a perspective on what is known, how it’s studied, and what’s still to be discovered about the interactions of ionic liquids with ionizing radiation. His write-up will be part of a special issue due out this November.

When ionizing radiation moves through a material, Wishart explains, it knocks electrons off atoms, simultaneously generating “holes” — vacancies created when the electrons are liberated. The ejected electrons “thermalize” by losing their excess kinetic energy to the medium (often inducing more excitations and ionizations along the way) and come to rest some distance from their parent holes. Electrons and holes may also recombine to form stable ground states or other excited states that go on to trigger further reactions.

When they come to rest, the electrons are called “pre-solvated,” because they are not yet equilibrated with their surroundings. They are initially weakly trapped and highly mobile, but become more localized and less mobile as the solvation process proceeds.

That may not sound like much of a slowdown, but it gives chemists like Wishart time to capture the action, thanks to the extremely high time resolution of the tool they use to study the process. With picosecond resolution, the Laser Electron Accelerator Facility (LEAF) at Brookhaven Lab can observe the reactivity of pre-solvated electrons and the holes left behind in ionic liquids. Thanks to a novel “optical fiber single-shot” detection system recently developed at LEAF by Brookhaven chemist Andrew Cook, picosecond laser beams can measure a reaction’s progress at 142 different points in time with one shot of the accelerator. This novel technique makes it easy to study fast reactions on small quantities of valuable samples, and on viscous materials, like some ionic liquids, that are hard to exchange for fresh sample in a flow system.

Chemist James Wishart has received two Single Investigator and Small Group Research grants from the DOE Office of Basic Energy Sciences to study different aspects of ultrafast ionic liquid chemistry using the LEAF accelerator and other techniques. He is the lead principal investigator of a five-institution project that integrates the efforts of radiation chemists and separations chemists to enable the design of robust and reliable ionic liquid-based methods to recycle spent nuclear fuel. The other institutions involved in this work are Argonne National Laboratory, Oak Ridge National Laboratory, the University of Mississippi, and the University of Wisconsin at Milwaukee.

Wishart is also a co-principal investigator on another five-institution project led by Rutgers University to study how the unusual environments within ionic liquids affect charge transport processes that are key steps in energy collection, storage, and use. Other collaborators on that project are based at Penn State, the University of Minnesota, and the University of Iowa.

“These projects bring together world-leading experts in the multiple specialties required to effectively address these complex scientific challenges,” Wishart said.

“These experiments have shown us that because pre-solvated electron states last a lot longer in ionic liquids, they can react before becoming fully solvated to produce radically different products than they would in conventional solvents,” Wishart said.

The chemistry that Wishart studies may be applied to more efficiently convert solar energy into fuels or electricity, or improve the efficiency and storage capacity of batteries. And some — of great personal interest to Wishart — could be useful in recycling spent nuclear fuel to minimize waste.

“The spent-fuel treatment systems we have in place now were designed during the Cold War with the idea of recovering only what could be used to make nuclear weapons,” Wishart said. “Separating other useful elements out of the waste stream was neglected. With an advanced separation system making use of the unique properties of ionic liquids, we could take spent fuel — composed of uranium, plutonium, and other highly radioactive elements and fission products — and direct each component either to be burned up in reactors, used for industrial purposes, or assigned as waste. That would make better use of scarce resources and add greater certainty and security to waste disposal because the volume of waste would be reduced and what’s left would be radioactive for a much shorter period of time.”

Because ionic liquids have low flammability and low volatility, they are particularly attractive for this kind of hazardous waste treatment. Additionally, boron (10B), which captures atom-splitting neutrons, can be included in the ionic liquid to prevent a nuclear chain reaction from occurring during the processing of fissile materials.

Studies using LEAF will also reveal which ionic liquids are best suited to dealing with high levels of radiation.

“We want to make these ionic separation systems ‘self-healing,’ resulting in as much recombination of electrons and holes as possible,” Wishart explained. That way the separation system does not become chemically degraded and inefficient, so it can be used over and over again.

“It’s an exciting time to be in this field because we have the potential to make important contributions to sustainable ways to make, store, and use energy,” Wishart said.