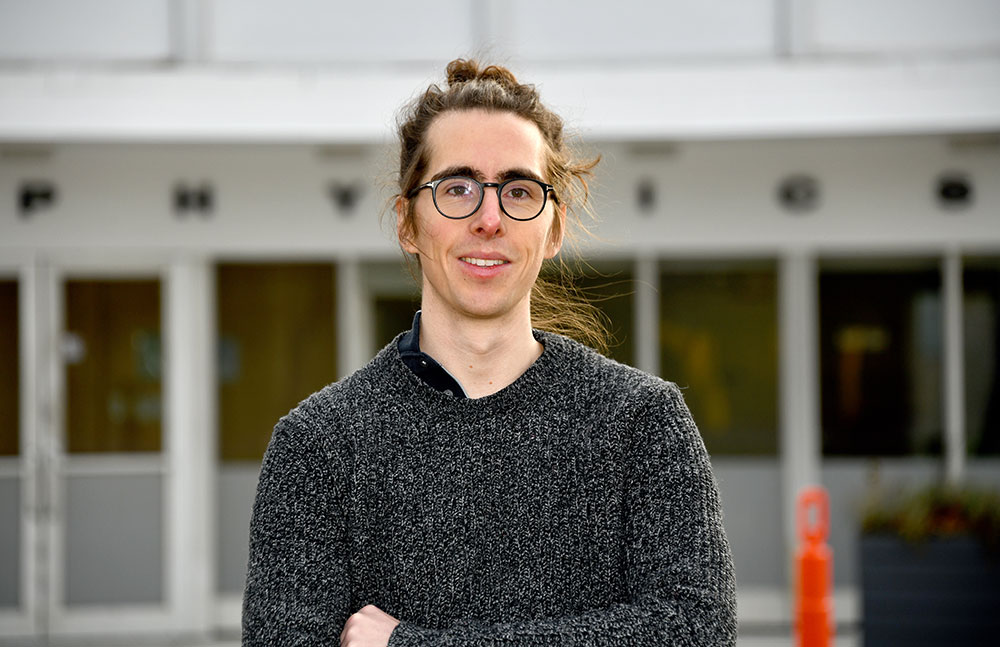 In an up-and-coming field like Quantum Information Science (QIS), you’re sure to find a lot of up-and-coming talent. The U.S. Department of Energy (DOE)’s Brookhaven National Laboratory-led Co-design Center for Quantum Advantage (C2QA) is home to a number of postdocs and early career scientists who are pushing boundaries and exploring new concepts.

Adrien Florio, a postdoctoral research associate contributing to C2QA’s theory and applications subthrust, has been hard at work as a fellow in Brookhaven Lab’s Nuclear Theory Group. He was selected as one of only two Distinguished Goldhaber fellows in 2022. These prestigious three-year fellowships are awarded to exceptional candidates who have demonstrated their expertise and talent as well as their drive to pursue independent research. At the end of their appointment, fellows are encouraged to apply for scientific staff positions at the Laboratory.

“I intend to use this opportunity to further advance C2QA’s goals and efficiently disseminate my research about quantum field theory, quantum information science, and quantum simulations,” remarked Florio, who is currently working with Rob Pisarski, a co-principal investigator and leader of C2QA’s theory and applications subthrust.

“Working with Florio is invigorating. He’s not just an innovative scientist, he’s also down-to-earth and most congenial. He’s done some interesting work in a number of fields, from quantum information science to cosmology, and I’m fascinated to see the directions his physics goes,” said Pisarski.

C2QA’s co-design strategy supports the development of hardware and software in tandem, targeting three main research thrusts: software and algorithms, devices, and materials. The theory and applications subthrust that Florio and Pisarki contribute to falls under the software and algorithms thrust. Because quantum computing works in a completely different way than the classical computers we’re all familiar with, it requires and entirely new software architecture. With software that can harness the processing power of quantum computers, researchers can create simulations with the ability to illustrate fundamental concepts in nature, giving us an understanding of our universe that has never been experienced before.

“My involvement with C2QA is an embodiment of the concept of co-design,” explained Florio. “On one side, I am a user of current/near-term quantum computers. On the other side, I am deeply interested in the more fundamental question of entanglement generation and its role in quantum field theories.”

Florio’s expertise lies in the theory of strong fields and their dynamics from a Quantum Field Theory (QFT) perspective. This complex theory is the modern framework used to study the fundamental particles that make up our universe. Fields aren’t something you can see, but their forces can be observed. Earth’s magnetic field, for example, is what makes a compass needle point north. By combining elements of special relativity and quantum mechanics, QFT unifies the concept of fields to the concept of particles. Rather than being seen as separate entities, this theory sees particles like electrons as excitations—like ripples—of an electron field.

Florio’s research covers topics ranging from understanding the formation of the Universe to heavy ion collisions, with intimate links to quantum information science and quantum computation. He is a co-author on 10 publications and another two preprints; he is sole author of a publication in Physical Review D. He is eager to share his interest and enthusiasm in this specialized field and has given nearly 30 talks and supervised five students.

“My journey into quantum computation and quantum information science started in 2020, when I graduated from the Ecole Polytechnique Federal de Lausanne (EPFL) in Switzerland and joined Stony Brook University’s Nuclear Theory group as a postdoc,” said Florio. After writing “Gibbs entropy from entanglement in electric quenches,” I began working with C2QA. I took advantage of any opportunities I could at that time, such as taking part in the monthly postdoc community meetings and volunteering to help with the QIS 101 summer school program.

Florio is currently involved in different projects to simulate the dynamics of a few low-dimensional field theories and attempting to gain a new physical understanding from them. In the future, he would like to use his research to improve quantum simulations and computations. He also aims to continue studying the role of entanglement, a distinctive feature of quantum mechanics where arbitrarily separated particles sometimes need to be thought of as a single entity sharing the same quantum state in QFT.

C2QA is still growing and evolving, creating an array of opportunities for postdocs and other researchers looking to delve deeper into the exciting world of quantum information science. The C2QA Position Openings page is updated regularly with new postings, so check back frequently. C2QA also collaborates with the other four National Quantum Information Science Research Centers (NQISRCs) in hosting an annual quantum career fair. The next event is expected to take place in September 2023. Stay tuned to the virtual event’s website for details.