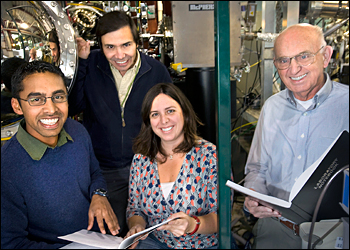 Hydrogen — the lightest and most abundant element on the periodic table — is also a potential powerhouse. Today, we use pure hydrogen in a range of chemical processes, including the synthesis of ammonia for fertilizers. Some scientists believe that hydrogen could power everything from electronics to buildings to cars in a model referred to as the hydrogen economy. In order to achieve such feats, however, scientists need to produce pure hydrogen.

Chemists can obtain pure hydrogen through the water-gas shift reaction, in which carbon monoxide and water yield carbon dioxide and pure hydrogen molecules. Four years ago, Brookhaven chemist Jose Rodriguez and his colleagues began to investigate a highly effective catalyst for this reaction, which combined gold and ceria (CeO2). Their main objective was to understand exactly how each component of the catalyst behaved.

“You need to understand the role of each element in the reaction: what is the metal doing, what is the oxide doing?” Rodriguez said. “Only then can you figure out how to optimize the catalyst.” 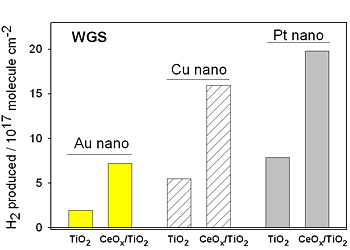 Production of hydrogen through the water-gas shift reaction after dispersing gold (Au), copper (Cu), and platinum (Pt) on TiO2(110) and the group’s “super-catalyst,” CeOx/TiO2(110).

Beginning with this first catalyst, and gradually tweaking one variable after another, Rodriguez and his colleagues set out to find even better catalytic combinations. Using characterization techniques like photoemission, time-resolved x-ray diffraction and x-ray absorption spectroscopy at NSLS beamlines U7A, U12, X7B, and X19A, they studied details of the structural and electronic properties of the gold-ceria catalyst.

With in-situ characterization, Rodriguez and his colleagues can determine two key factors: precisely when the active phase for the reaction appears on the catalyst and how it affects the reaction mechanism.

These key factors allow scientists to refine the reaction, exchanging and adjusting its components. Each adjustment can make a difference in the efficiency of the total process.

Last fall, Rodriguez and his colleagues tested a new catalyst that combines ceria in a mixed metal oxide, building upon the findings of their previous research. They found that this surface combination with a dispersion of gold, copper, or platinum nanoparticles revealed high catalytic properties. Their characterization of the catalyst’s powerful properties first appeared in the Proceedings of the National Academy of Science.

More recently, in the Journal of the American Chemical Society, they compared catalytic effects with a dispersion of gold, copper, and platinum nanoparticles. While platinum showed the highest catalytic activity, meaning it produced the most hydrogen for a fixed amount of ceria, copper was a close second and has the advantage of being a much less expensive metal.

“These papers were a breakthrough for us because they show that our catalyst works,” Rodriguez said. “This is a super-catalyst, the next generation catalyst for the water-gas shift reaction.”

This initial characterization is a victory for Rodriguez and his colleagues but is by no means the end of their quest. The new catalyst involves a more complex reaction mechanism than the gold-ceria catalyst that began Rodriguez’ studies. Studying this next-generation catalyst could reveal more discoveries and can lead to an even more potent super-catalyst.

Their research is funded by the U.S. Department of Energy Office of Basic Energy Sciences.