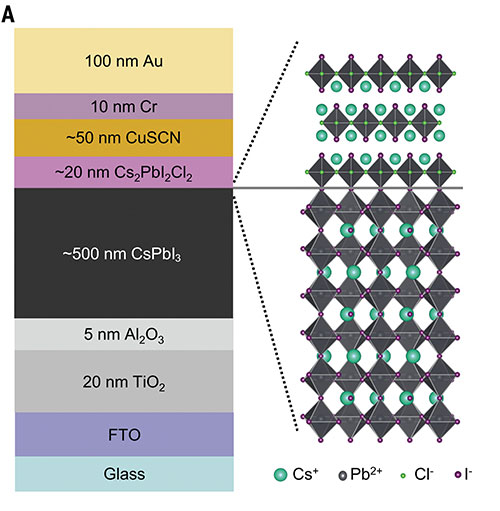 Scientists have developed the first perovskite solar cells (PSC) that should maintain 80% of its efficiency for more than 5 years, opening the pathway to commercialization. It also has a comparable performance to silicon-based cells.

Perovskites are well suited for solar cell applications; however, until now their lifetime did not meet the industrial threshold. Additionally, this work establishes a new method for testing the durability and lifetime of solar cells.

In this study, a team of researchers developed the first perovskite solar cell with a lifetime of about 30 years, opening the pathway to commercialization. They achieved this long-lasting lifetime by studying the degradation process of their devices using several scientific tools. The team collaborated with researchers at the National Synchrotron Light Source II (NSLS-II) and the Center for Functional Nanomaterials (CFN), two U.S. Department of Energy (DOE) Office of Science user facilities located at DOE’s Brookhaven National Laboratory, to measure the atomic structure of their devices using the Complex Materials Scattering (CMS) beamline.

The team developed a two-dimensional (2D) Cs2PbI2Cl2 capping layer between the perovskite active layer and hole-transport layer that stabilizes the interface while increasing the power conversion efficiency of the PSCs from 14.9 to 17.4%. They found that devices with this 2D capping layer did not degrade at 35°C and required >2100 hours at 110°C under constant illumination to degrade by 20% of their initial efficiency.

X-ray scattering measurements were conducted at the Center for Functional Nanomaterials (CFN) and the Complex Materials Scattering (CMS) beamline of the National Synchrotron Light Source II (NSLS-II), which both are US DOE Office of Science Facilities, at Brookhaven National Laboratory under Contract No. DE-SC0012704. The authors acknowledge the use of Princeton’s Imaging and Analysis Center, which is partially supported through the Princeton Center for Complex Materials (PCCM), a National Science Foundation (NSF)- MRSEC program (DMR-2011750). Y.-L.L. acknowledges support from the National Science Foundation, under grants DMR-1627453 and CMMI-1824674. F.G. acknowledges the Swedish Government Strategic Research Area in Materials Science on Functional Materials at Linköping University (Faculty Grant SFO-Mat-LiU No. 2009-00971). T.R.L. thanks the Julis Romo Rabinowitz Graduate Fellowship for funding. Q.C.B. thanks the Arnold and Mabel Beckman Foundation for supporting this work.