It's No Secret: Fifty-eight Years of National Security Programs at BNL 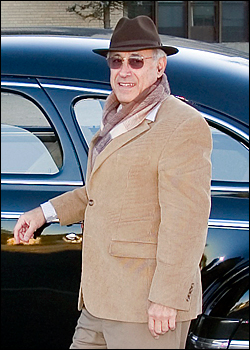 Prepare for a true tale of suspense and international intrigue. A tale that began in 1952, continued through the Cold War, and is not yet complete today. A tale of unexpected allies. Hear the true tale of one Laboratory’s efforts to keep nuclear materials out of the hands of evildoers.

Freidlander. Higinbotham. Dodson. Kouts. And many more! See some of BNL’s all-star cast in the defining roles that shaped their careers as they worked toward keeping the nation and the world safe from the proliferation of nuclear weapons.

On Wednesday, November 17, join BNL’s Nonproliferation & National Security Department (NNS) Chair Joseph Indusi for the 463rd Brookhaven Lecture, titled “It’s No Secret: Fifty-eight Years of National Security Programs at BNL.” All are invited to attend this free talk, which is open to the public and will be held in Berkner Hall at 4 p.m. Refreshments will be offered before and after the lecture. Visitors to the Lab 16 and older must carry a photo ID while on site.

During his talk, Indusi will discuss how the creative minds and technical expertise at BNL provided the U.S. with the technical support needed to safeguard nuclear materials after World War II. He will also explain BNL’s role in strengthening international safeguards, solving inventory discrepancies for nuclear materials thought to be missing, and protecting existing stockpiles of nuclear weapons.

Before arriving at BNL 37 years ago, Indusi attended Stony Brook University and earned a master’s degree in applied analysis and a Ph.D. in applied mathematics and statistics. He also worked as a systems consultant at Burndy Corporation in Norwalk, Connecticut, in 1972-73, prior to joining BNL as an assistant mathematician in the Lab’s Technical Support Organization (TSO) in 1973. The TSO organization was later incorporated into the Safeguards and Arms Control Division and Indusi became the Division Head from 1986 to 2000. He also served as an associate department chair for the Department of Advanced Technology from 1990 until 1995. Indusi was named NNS Chair in 2001, where today, he continues to uphold and advance BNL’s commitment to stopping the spread of nuclear weapons.