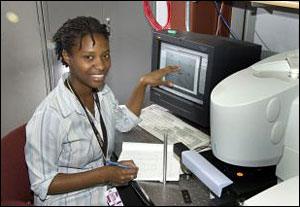 Children’s fingerprints disappear faster than those of adults — a little-known fact that can hamper investigations of kidnapping cases. To investigate this phenomenon, a team of researchers used beams of infrared light at Brookhaven’s National Synchrotron Light Source (NSLS) as a powerful detective’s microscope, finding that fingerprint staying power is based on the amount and types of oil in your skin.

Forensic scientists often use techniques like magnetic filings dusting, iodine, and cyanoacrylate fuming to see otherwise invisible, or latent, fingerprints. Although efficient, inexpensive, and relatively fast, these methods make it difficult to preserve trace evidence found in a fingerprint. This is particularly difficult with aged fingerprints left by children, which have been shown to fade faster than those of adults, making them almost impossible to capture.

“Previous research has linked the difference in the longevity of fingerprints to the type of oil found in a person’s skin,” said NSLS biophysicist Lisa Miller, one of the authors of the study. “This oil, known as sebum, is just one of the components of a fingerprint, which also can contain small pieces of skin and sweat residue. We wanted to determine how these fingerprint components change over time in adults and children, and how these changes alter our ability to predict someone’s age based on their fingerprint.”

Using a collection of latent fingerprints given by six father (ages 35-45) and son (ages 7-10) pairs, the researchers watched for chemical changes over the course of four weeks. Twice a week, one fingerprint from each participant was dusted, lifted, and analyzed based on the number of features, or minutiae, visible. At the same time, a non-invasive synchrotron technique called Fourier transform infrared microspectroscopy (FTIRM) mapped the location and makeup of the skin and sebum in the prints.

“FTIRM is a very useful tool in this case because it allows us to examine individual fingerprint components — namely, skin and sebum — separately,” Miller said.

The NSLS study, which was carried out at beamline U10B, helps researchers understand this disappearing act. As predicted by previous studies, FTIRM showed that adults produce more sebum than children, which leads to darker prints.

“The more oily and moist your skin is, the better print you leave behind to be dusted and lifted,” Miller said.

Researchers also found that the composition of the lipids, or fats, in sebum differ significantly between adults and children. 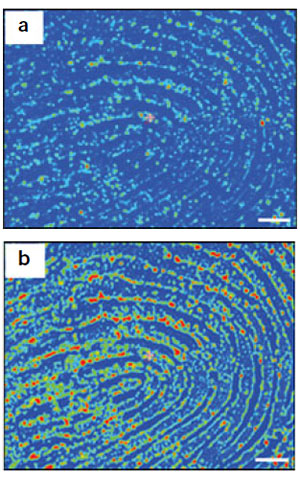 FTIRM images generated from a child’s fingerprint, showing the a) protein in the fingerprint, and b) the oil (sebum) in the print.

Adult sebum has higher concentrations of stable lipids such as squalene and wax esters, which are less likely to vaporize over time. Conversely, the sebum of children contains higher levels of cholesterol and branched chain free fatty acids — unstable lipids that break down more quickly.

The results, which appeared in the March 2010 edition of the Journal of Forensic Sciences, indicate that children’s prints may disappear faster because they contain different oils. This could pave the path toward more advanced fingerprint detection techniques.

“Based on the differences in chemical composition, children’s prints can still be distinguished from adults’ prints with FTIRM even when the dusted copies are barely identifiable,” Miller said. “To accurately determine the age of the print’s individual, FTIRM should be used as a complementary tool to conventional forensic methods.”

The research was led by Kimone Antoine, who worked at NSLS through the U.S. Department of Energy’s Science Undergraduate Laboratory Internship program and recently completed her master’s degree at the John Jay College of Criminal Justice. Other authors include Shirin Mortazavi, a local high school student who spent a summer working at NSLS through Brookhaven’s High School Research Program, and Angela Miller, a graduate student studying forensic science at National University in California.