At a once defunct Navy facility in Rhode Island, Brookhaven scientists working on the proposed Long Baseline Neutrino Experiment (LBNE) have set up a death trap for the key components of the project's future neutrino catchers. 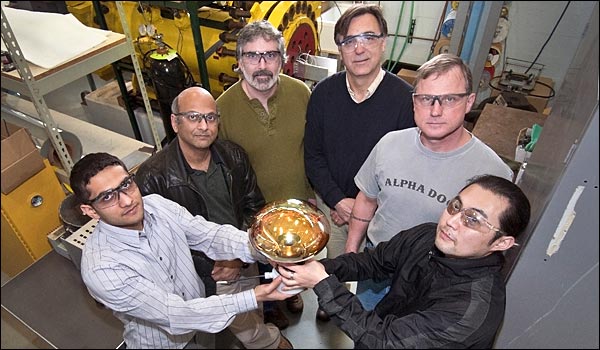 There, under the stress of 500,000 gallons of pressurized water, glass bulbs called photomultiplier tubes come to their end in super-fast and super-dramatic implosions.

Thousands of these tubes, shaped like enlarged, flattened light bulbs, will line two massive detectors in an effort to illuminate the behavior of neutrinos — extremely elusive and lightweight elementary particles that could answer some fundamental questions about our universe.

In its current design, LBNE will send the world's most intense beam of neutrinos about 800 miles underground from Fermi National Accelerator Laboratory in Illinois to a mine in South Dakota. Brookhaven is leading the management, design, and construction of the experiment's two water Cherenkov detectors, cylindrical devices large enough to each hold a 20-story building or nearly 37 million gallons of ultra-pure water. When a neutrino interacts with these water molecules, it will create light that gets detected by the 50,000 photomultiplier tubes coating the detector's walls.

The entire endeavor will require 100,000 of the fragile tubes, which have caused major headaches in the past.

In a similar detector at the Super-Kamiokande neutrino experiment in Japan, an implosion of one faulty tube created a shock wave that destroyed more than half of its closely placed neighbors. By studying the photomultiplier tubes' demise, BNL scientists hope to find the best possible design for the LBNE version.

"If something similar happened at LBNE, it would be a show stopper for the experiment," Sharma said. "It would take a very long time, and a lot of money, to drain the detector, replace the bulbs, and start again. We want to be sure that even if one of our tubes fails during the experiment, it doesn't take out the rest of the bulbs with it."

Sharma and other members of Brookhaven's LBNE group started their implosion investigations in-house with an item much smaller, and cheaper, than a photomultiplier tube — a light bulb. In a 60-gallon, pressurized tank in the Physics Building, scientists used a high-speed camera to watch the bulb implode, creating a classic checkerboard motif as the glass literally cracked under pressure. After similar tests on imitation photomultiplier tubes, and extensive pressure modeling, the group decided to move on to the real thing. 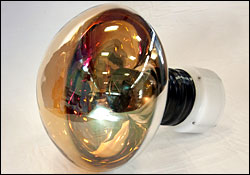 At the end of 2009, BNL physicists started working with staff from the Naval Undersea Warfare Center (NUWC) in Rhode Island to bring a former torpedo-testing facility back to life. The Propulsion Noise Test System, featuring a 50-foot spherical tank, was shut down 17 years earlier.

"There were more than a few cobwebs when we first visited," said LBNE group leader Milind Diwan. "But with funding from Brookhaven, the NUWC team cleaned it up quickly and added the equipment we needed. In just a few months, it was transformed into an ideal place for us to perform these tests."

Testing began in December. After submerging the photomultiplier tube in water pressurized to 88 pounds per square inch (psi) — the pressure that will exist in the LBNE detectors — the team punched a small hole through the glass bulb with a hydraulic metal poker, breaking its vacuum. High-speed cameras sequenced the resulting implosion. And sensors placed in the tank recorded the shock wave created from water rushing into the tube's empty space.

BNL and Naval Undersea Warfare Center researchers monitor the shock wave produced during one of the photomultiplier tube implosions at the Propulsion Noise Test System in Rhode Island.

Researchers found that for a few microseconds following the start of the implosion, the pressure of the water closest to the tube soars to 800 psi, a 10-fold increase. The pressure inside a tire, for instance, is about 30 psi, and the human body can't withstand more than about 60 psi. These results closely match implosion modeling that the Brookhaven scientists performed prior to the tests.

"Every square inch of the phototubes that are closest to the implosion are pushed on with a force of 800 pounds," Sharma said. "That's a lot of pressure, but it lasts only a few microseconds. Is it enough to start a wave of implosions in a detector? We will study this."

Now that the scientists have confirmed their models with real data, they are exploring two ways to prevent a catastrophic implosion in the detector. The first option is to make the glass itself stronger. With help from glass experts at Alfred University, the scientists might search for a material strong enough to withstand the impact of a nearby implosion. The second option is to design phototube enclosures that in the case of an implosion would deflect or absorb the shock wave, protecting its intact neighbors.

Once scientists have a design, they'll return to NUWC to test an array of the beefed-up tubes in the tank. The current LBNE schedule calls for a final design of the photomultiplier tube array by 2014.