Rumbles of thunder and pouring rain set an appropriate scene on June 9 for a science café focused on fact, fiction, and murder. About 60 community members, employees, and students came to Brookhaven for the evening event, which featured crime novelist Archer Mayor and presentations by three Photon Sciences researchers of light-source-based forensics work. 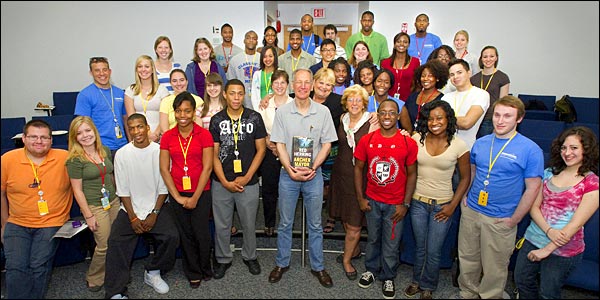 Mayor, a death investigator for the Vermont State Medical Examiner’s Office and a deputy for the Windham County Sheriff’s Department, has written 21 books surrounding the life of fictional detective Joe Gunther. In the latest installment, Red Herring, Gunther is puzzled by the discovery of single drops of blood found at the scene of three seemingly unrelated murders.

When conventional forensics lead to a dead end, Gunther takes the evidence to Brookhaven’s National Synchrotron Light Source (NSLS), where scientific analysis powered by bright beams of x-rays give him the information he needs to snag the killer. Mayor read key NSLS-related excerpts from the book and answered questions about his style of writing, the role of science in the story, and his journey to Brookhaven’s gates: He first heard about the Lab from a friend who's a BNL employee, and toured campus with biologist Wally Mangel and numerous other employees.

Mayor was joined on stage by Photon Sciences researchers Lisa Miller and Eric Dooryhee and University of Chicago scientist Tony Lanzirotti, each of whom presented a real-life forensic case that was solved at a light source. Miller, a biophysical chemist, detailed her group’s research on the chemical makeup of children’s fingerprints, which disappear from surfaces much faster than those of adults. Lanzirotti, a geochemist, showed how scientists analyzed 500-year-old strands of hair from Italian royals to look for signs of mercury poisoning. And Dooryhee, who’s leading the development of the x-ray powder diffraction beamline at the National Synchrotron Light Source II (NSLS-II), explained how scientists determined how a man whose 5,000-year-old body was found preserved in the Alps had died.

An encore presentation of the event was presented on June 11 at the Borders bookstore in Stony Brook. In addition, Mayor spoke with about 40 of Brookhaven’s summer students at a brown bag lunch on June 10.

To conduct research for Red Herring, novelist Archer Mayor visited Brookhaven Lab in 2009, talking to scientists and getting a feel for the Laboratory. He left with a lot more than background information. Brookhaven readers might find a familiar character in one of Red Herring’s fictional scientists, Eric Marine, “a white-haired bespectacled man with a face whose every feature mirrored the motion of his mouth.” That’s because Marine was inspired by Brookhaven biologist Wally Mangel, who guided Mayor through much of the Lab’s science. In his efforts to explain the National Synchrotron Light Source to Mayor, Mangel even composed the following haiku, which appeared in the book:

Meaning: synchrotron radiation, which is brighter than the sun, is produced when there is a change (delta) in momentum (the Latin plural is momenta) of the electrons, which zip around the synchrotron ring at the speed of light — 186,000 miles per second.