The 2011 Employee Recognition Awards — the Science & Technology Award, the Engineering Award, and the Brookhaven Award — were presented to 16 BNLers at a ceremony and reception held at Berkner Hall on Friday, June 17. Lab Director Sam Aronson warmly congratulated the award recipients and also the rest of the Lab, recognizing support for the extraordinary efforts of the winners. He also noted the simultaneous excellence across the Lab, and particularly thanked those who made this occasion possible and such a success, including the nominators of candidates, members of the committees who selected the winners, and Human Resources & Occupational Medicine Division’s Robert Kelly and Mary McGrath.

The six winners of the Science and Technology Award are Sally Dawson, Physics Department; David Diamond, Nuclear Science & Technology Department; Oleg Gang, Center for Functional Nanomaterials; Animesh Jain, Superconducting Magnet Division; Vladimir Litvinenko, Collider Accelerator Department; and José Rodriguez, Chemistry Department. Deputy Lab Director for Science and Technology Doon Gibbs presented the awards, consisting of a plaque and $10,000 each, which are given to recognize distinguished contributions to the Laboratory’s mission in each of three broad areas of work, and are the highest accolades given by Brookhaven to its employees. Read about the contributions of the six Science & Technology Award winners below. Articles on the winners of the Engineering and Brookhaven Awards will be featured later this month. 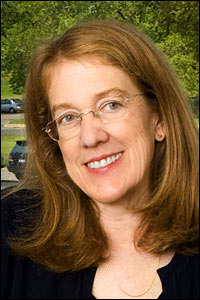 Senior Physicist Sally Dawson is recognized as one of the world’s leading theoretical physicists, whose work in high energy theory has strongly influenced more than two decades of particle physics research. Early on, she recognized the importance of the Higgs particle, the critical missing link in the Standard Model of particle physics — its discovery crucial to scientists’ understanding of the origin of mass. The Higgs has been pursued at Fermi National Accelerator Laboratory’s Tevatron, and it is now central to the mission of the CERN Large Hadron Collider (LHC). Dawson’s seminal publications on how to search for the Higgs are a key part of experimental efforts to capture this particle.

In addition, the two papers that Dawson co-authored on top and bottom quark production at colliders have proved essential in interpreting results from the Tevatron and are expected to prove equally useful in understanding the properties of heavy quarks at the LHC. Together, these two papers have already received about 2,000 citations — 500 citations classifies papers as “renowned” in the SPIRES-HEP database of particle physics literature.

Dawson, who joined BNL in 1986, headed the BNL High Energy Theory group from 1998 to 2004, and chaired the BNL Physics Department from 2005 to 2007. She has served as chair of the American Physical Society’s Division of Particles and Fields, vice chair of the National Research Council’s Decadal Survey on Particle Physics, and chair of the Fermilab Program Advisory Committee. 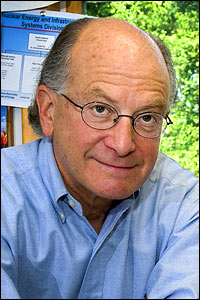 Senior Nuclear Engineer David Diamond, chief scientist in the Nuclear Science & Technology Department, is recognized for his leadership in developing and applying computational methods to improve the safety of nuclear reactors. These contributions, which require expert knowledge of numerical methods and the physics and engineering of reactor systems, have become the standard for safety analysis in nuclear reactors.

Diamond, who joined BNL in 1968, is widely regarded in the international nuclear engineering community as a leading expert in nuclear reactor dynamics, with a fundamental understanding of the physics of diverse of reactor systems. One aspect of this is his work to simulate how nuclear reactors function under various transient and hypothetical accident conditions — crucial information to assure the safety of both power plants and research reactors. Previously, as head of BNL’s Nuclear Energy and Infrastructure Systems Division, he oversaw 25 staff members — including civil, nuclear, mechanical, electrical, and human performance engineers. Diamond is consulted on safety, design and related technical aspects of nuclear reactors, primarily for the U.S. Nuclear Regulatory Commission, but also for the Department of Energy, the Advisory Committee on Reactor Safeguards, the National Research Council, and the International Atomic Energy Agency. His expertise in nuclear reactor safety has been applied to problems in the United States, and also in Argentina, Canada, Finland, Russia, Switzerland, and other countries.

A fellow of the American Nuclear Society, Diamond was honored with the Society’s “Tommy” Thompson award in 2010 for “outstanding wisdom and direction to key elements of world nuclear safety activities.” 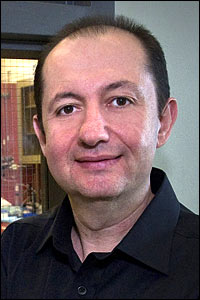 Scientist Oleg Gang of the Center for Functional Nanomaterials (CFN) and his team demonstrated the use of DNA molecules to assemble three-dimensional ordered arrays of nanoparticles. This groundbreaking research, conducted at the CFN and published in Nature in 2008, brought Gang worldwide recognition as a leader in the field of nanoscience.

The method Gang developed can be used to manipulate the structure — and therefore the properties and potential uses — of many materials at the molecular level. Such fine-tuning of materials promises applications in photovoltaics, energy storage, catalysis, cell-targeted systems for drug delivery, and bio-molecular sensing for environmental monitoring and medical applications.

Since his landmark achievement, Gang has developed a method for high-throughput assembly of nanoparticle clusters, and he has characterized the nanoscale lattices of particles using x-ray facilities at the National Synchrotron Light Source. Also, Gang and his group have made important contributions to rational nanoparticle cluster design and molecularly switchable structures, and to the study of the optical behavior of particle arrays.

Gang earned a Ph.D. in soft matter physics from Bar-Ilan University in 2000, and he was a Rothschild Fellow at Harvard University from 1999 to 2002. After joining BNL as a Goldhaber Fellow in 2002, he became an assistant scientist at the CFN in 2004. He rose through the ranks to become the CFN’s leader for Soft Matter and Biomaterials Theme in 2006, and scientist in 2009. Gang has received numerous honors and recognitions, including the 2010 Gordon Battelle Prize for Scientific Discovery. 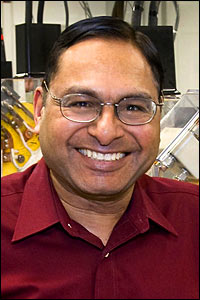 Physicist Animesh Jain of the Superconducting Magnet Division is recognized for his outstanding achievements in the effort to create a unique system for measuring the magnetic fields of magnets in BNL’s National Synchrotron Light Source II (NSLS-II).

The NSLS-II design calls for magnets that are more accurately made, measured, and positioned than those in previous light sources and that require extremely accurate measurements of their field quality. Also, strong quadrupole and sextupole magnets are placed close enough for their fields to interact. A unique design was needed for a rotating coil sensitive enough to measure the field in the quadrupole and sextupole magnets simultaneously — covering a large range of high order fields, as high as 42-pole, compared to the 30-pole maximum for magnets at the Relativistic Heavy Ion Collider on which Jain worked when he joined BNL in 1991.

For NSLS-II, Jain devised a unique coil that not only met all the NSLS-II requirements, but also provided redundant data to ensure accuracy. He developed and codified an understanding of the relation between magnet construction errors and the measured harmonics and traveled to help NSLS-II magnet vendors correct errors in magnet production. Jain led work to extend and refine an existing method using a vibrating wire to measure the center of a magnet’s field so as to be able to align the centers of the different NSLS-II magnets’ fields to within five microns along a four-meter length, and he wrote the code for trained technicians to make these measurements. Jain’s excellent leadership, meticulous experimental technique, and excellence in physics and analysis have resulted in a world-leading magnet measurement system at NSLS-II. 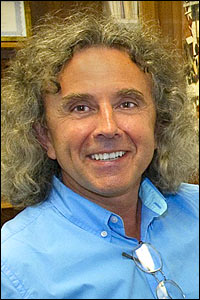 Senior Physicist Vladimir Litvinenko of the Collider Accelerator Department was recognized for his outstanding leadership and groundbreaking contributions in research and development (R&D) for a complex new machine that will collide electrons with ions from the Relativistic Heavy Ion Collider (RHIC). This machine, eRHIC, combined with an upgraded RHIC, is strategically important for next-generation nuclear and particle physics programs at BNL and would also open a pathway to future fourth-generation x-ray Free-Electron Laser (FEL) light sources.

Litvinenko developed the current vision of eRHIC with a design providing extra-high luminosity, low cost, and many benefits to detectors. His contributions included the idea of small-gap magnets, which will enable the machine to reach extremely high energy while preserving the beam quality. He invented the concept of providing the required high current by a device called a funneling multi-cathode polarized electron gun, and he pioneered an exceptional beam-cooling method called coherent electron cooling, laid its theoretical principles, and derived analytical formulae describing its performance. Other creative contributions included a way to suppress so called “kink” instability characteristic for linac (linear accelerator) based electron-ion colliders like eRHIC.

After joining BNL in 2003, Litvinenko made critical contributions to R&D on the high-energy electron cooling of RHIC and to discoveries in designing high-brightness electron beam injection to an energy recovery linac machine. He also played a key role in the National Synchrotron Light Source II team developing the design philosophy for this unique light source. With colleagues, he also established the Center for Accelerator Science & Education at Stony Brook University and BNL, where he is a co-director and teaches students. In 2004, the International Free Electron Laser (FEL) community awarded him the FEL Prize for his outstanding contributions for FEL science and technology. 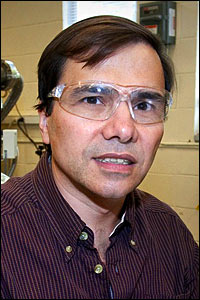 During his 20-year career at BNL, Senior Chemist José Rodriguez, Chemistry Department, has focused on catalysts used for the production of clean, efficient, renewable fuels and the control of environmental pollution. His research, which couples sophisticated experimental studies with state-of-the-art theory, has established him as a world leader in catalysis research and has earned him his current recognition at BNL.

Rodriguez has made significant contributions to the understanding of surface catalytic processes, particularly in metals and metal alloys. Early in his career he pursued a highly productive research program in hydrodesulfurization catalysis — a process for the removal of sulfur from petroleum feedstocks to control pollution and produce cleaner fuels.

In critical research performed at the National Synchrotron Light Source, Rodriguez and his colleagues have shown that nanoparticles of either gold or copper, supported on a metal, can perform an effective catalytic role in the “water-gas shift” reaction, a process that purifies hydrogen feed streams, thereby improving the performance and lifetime of fuel cells used to convert hydrogen into electricity.

Born and raised in Venezuela, Rodriguez earned his undergraduate degrees from the Simon Bolivar University in Caracas, and he received a Ph.D. in physical chemistry from Indiana University in 1988. After pursuing postdoctoral studies in chemistry at Texas A&M University, he joined Brookhaven as a research associate in 1991, rising through the ranks to become a senior chemist in 2002. While at BNL, Rodriguez authored or coauthored more than 300 peer-reviewed papers, which have been cited often in scientific literature. He is an adjunct professor of chemistry at Stony Brook University.