Brookhaven researchers are using high-frequency sound waves in conjunction with extremely bright x-rays to get a look at the atomic structures of the complex biological molecules that make our bodies work.

Like a high-speed x-ray camera, a technique called macromolecular crystallography provides researchers with 3-D "pictures" of the arrangement of atoms in molecules ranging from enzymes to nucleic acids. This is done by making a crystal comprised of many copies of the particular molecule and then bombarding it with beams of high-intensity x-rays that diffract, or bend, as they interact with the electrons in the atoms of the molecule. These x-rays then hit a detector, and are analyzed with a computer program to determine the atomic-level image. Knowing the molecule's structure provides information about its function, which may lead to important clues about how to create effective drugs to prevent or treat a disease.

"X-ray crystallography has transformed our understanding of biological processes," said Photon Sciences Directorate biophysicist Marc Allaire. "Crystallographers working at Brookhaven's National Synchrotron Light Source have determined the structures of numerous molecules, including those from organisms responsible for the common cold, Lyme disease, and AIDS, in addition to investigating how plants respond to environmental changes."

With a new class of brighter x-rays produced at next-generation light sources like Brookhaven's soon-to-be National Synchrotron Light Source II (NSLS-II), scientists will be able to study crystals measuring only a few micrometers along an edge (like those from membrane proteins) — an ability that's not possible with conventional macromolecular crystallography.

But there's a problem: As the crystal size is reduced, the diffraction signal weakens due to noise from the surrounding solvent. To address this technological gap, scientists from Brookhaven and Labcyte Inc. (Sunnyvale, CA) are incorporating a technique called acoustic drop ejection (ADE) into studies at NSLS and the Advanced Photon Source (APS) at Argonne National Laboratory. The technique uses intense sound waves to launch from a solution very small droplets containing even smaller protein crystals through the air and to a mounting mesh. There, the crystals are held in the line of x-ray beam.

"The idea that sound waves of great intensity near the surface of a liquid will eject droplets was demonstrated in the 1920s," said Brookhaven biologist Alexei Soares, a beamline scientist at NSLS for the Macromolecular Crystallography Research Resource (PXRR). "Nowadays, ADE is used to transfer living cells and isolated DNA without inducing strand breaks, suggesting that it might be gentle enough for protein crystals. The possibility of using ADE to move droplets of extremely small volume is ideal in minimizing the solvent surrounding microcrystals." 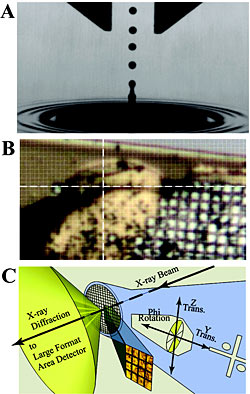 (a) Stroboscopic photomicrograph of a single 2.5-nL water droplet launched via ADE from the liquid surface. (b) Image from NSLS beamline X25 of the insulin microcrystal slurry supported on a micromesh (25 μm × 25 μm grid pattern) used to determine the structure. The 20 μm × 20 μm x-ray beam is centered at the intersection of the white cross hairs. (c) Illustration of the concepts for the raster-scanning x-ray diffraction strategy with a microdiffractometer and a several-micrometer-wide x-ray beam.

First, the scientists had to make sure that the ultrasonic sound waves — which have a greater frequency than we can hear — produced by ADE don't damage the crystals. The researchers grew two slurries containing solvent and hundreds of microcrystals of insulin or lysozyme — each crystal measuring about 10 micrometers on a side, about the size of a single cell. With an ADE device built by Labcyte, the group focused acoustic waves through the slurries, the pressure of which eventually expels 2.5-nanoliter drops of the crystal-filled liquid to the mounting mesh. (A nanoliter is one billionth of a liter).

The individual microcrystals, which are nearly impossible to see even with powerful microscopes, were located within the drops by scanning a very small x-ray beam across the micromeshes. Then, x-ray diffraction was performed at NSLS and APS to determine the crystal structures.

"We were astounded by the results. The fragile microcrystals are not harmed by the novel ADE mounting technique, and therefore they produce high-resolution x-ray structures," said Brookhaven biologist and PXRR beamline scientist Allen Orville. "These developments enable new opportunities in automated microdiffraction and the manipulation of microcrystals."

Their results were published as a Rapid Report in the May 31, 2011 edition of Biochemistry.

Because ADE is able to transfer an ejected drop to a precise location, the researchers also foresee the possibility of using the technique to load multiple drops of different crystal solutions on a single mesh, speeding up the discovery process.

"Using ADE, a new strategy could be developed for high-throughput structural screening of microcrystals against libraries of chemical compounds for drug development," Allaire said.