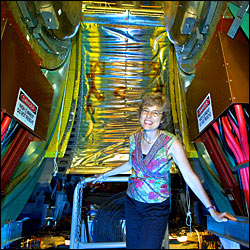 At the Relativistic Heavy Ion Collider (RHIC), physicists study what the universe may have looked like in the first few moments after its creation.

On this Sunday, August 14, you’ll be able to walk into the tunnel that houses RHIC’s twin accelerators and see where ion beams travel near the speed of light. You’ll visit PHENIX and STAR, two detector experiments each bigger than a house, and learn about the conditions that existed in the universe a microsecond after the Big Bang.

Get a Bus Ticket in Berkner Room B

To visit the RHIC facility, you need a bus ticket, which you get when you attend a RHIC overview in Berkner room “B.” Overviews are presented every 20 minutes; the last facility visit begins at 3 p.m.

In addition, you can enjoy the “Einstein Alive” Show, which is held in Berkner Hall auditorium at noon, 1:30 p.m., and 3 p.m. 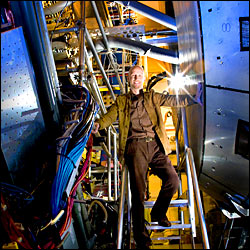 All this fascinating stuff is free! No reservations are needed. All activities are offered on a first-come, first-served basis. The Lab gates are open 10 a.m. to 3 p.m.; visitors 16 and older must bring a photo ID.

‘Don’t Miss This’ Items Include:

Learn about the “Cosmic Tug of War: How Dark Energy is Affecting the Evolution of the Universe.” This talk will be presented twice, at 11:30 a.m. and 2 p.m. in the auditorium of the Science Education Center near Berkner Hall. Zhaoming Ma, an astronomy phenomenologist in the BNL Physics Department’s Astrophysics & Cosmology Group, will explain what “dark energy” means and the new ways that are being developed to measure it. Ma is a member of an exciting new experiment that is searching for more evidence of dark energy: the Dark Energy Survey. The heart of the experiment is a $35 million digital camera, which will be mounted on a telescope in Chile and, beginning this fall, will snap images of the sky every 17 seconds over the next five years.

What is a carbon-neutral laboratory? Visit the one on wheels that will be parked outside the Science Education Center all day.