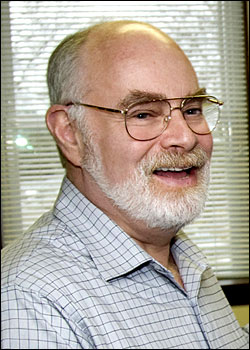 Since 2008, when he assumed the role of liaison between SBU and BNL, Marx put numerous programs in place to strengthen the relationship between the two institutions. His achievements included arranging for BNL staff to receive the same benefits as Stony Brook staff when using SBU facilities; enhancing communications between the Lab and SBU, resulting in more visibility for both; and, most recently, working on a joint BNL-SBU Center for Accelerator Science and Education and several other strategic initiatives still in development.

BNL Director Sam Aronson commented on Marx, “His dedication to the SBU/BNL partnership knew no bounds, and he brought a wellspring of ideas to the discussion. He was a valued friend to the Lab community and will be missed.”

“He had a love for science, which was evident when I worked with him at Brookhaven,” said Deputy Chair of BNL’s Physics Department Howard Gordon. “He was particularly dedicated as an ambassador for both the Laboratory and Stony Brook University, forging new connections between the two institutions.”

Another colleague at BNL, Associate Chair for High-Energy Physics Laurence Littenberg, said, “Mike was a most valued friend and collaborator. He had a rare combination of insight, imaginativeness, and resourcefulness, and was a pleasure to work with. His loss leaves a big hole personally and professionally.”

After earning a B.S. in physics from City College of New York in 1967 and a Ph.D. in physics from the Massachusetts Institute of Technology in 1974 while performing his thesis research at BNL, he joined the Laboratory’s staff as an assistant physicist in 1975. At BNL, he worked on numerous physics experiments, including kaon-decay experiments and neutrino studies.

He joined the SBU faculty in 1980, but he continued to collaborate closely with BNL scientists and other physics institutions on numerous projects. He was deputy spokesperson and co-initiator of the groundbreaking DZero experiment at Fermi National Laboratory that was successful in finding the top quark and achieving other significant physics results. He also developed an experimental program for the Superconducting Super Collider Laboratory before the funding for the project was cancelled in 1993.

In 1994, Marx became SBU’s Associate Dean, Physical Sciences & Mathematics, and, from 1996 to 2000, he was also the Deputy Project Director of the PHENIX Experiment during the construction phase of the Lab’s Relativistic Heavy Ion Collider. From 2001-2005, Marx was project manager of the KOPIO Experiment at BNL, part of the Rare Symmetry Violating Processes Project (RSVP). Although RSVP was cancelled in 2005, a continuing legacy is the MARIACHI (Mixed Apparatus for Radar Investigation of Cosmic Rays of High Ionization) Teaching Center at SBU, which Marx developed with BNL’s Helio Takai. The center unites physics teachers, students, and scientists to explore cosmic ray physics using advanced computing tools.

From 2006 to 2008, Marx was SBU’s Associate Dean for Operations & Budget, College of Arts & Sciences, before taking on the full-time position as the liaison between BNL and SBU. Marx was a Fellow of the American Physical Society.

A memorial scholarship has been established in Michael Marx’s name. It will help to support Stony Brook physics graduate students who elect to conduct their research at Brookhaven National Laboratory. Donations can be made payable to the Stony Brook Foundation and mailed to: Michael Marx Memorial Fund c/o Brian Woods, 488 Administration Building, Stony Brook University, Stony Brook, NY 11790.