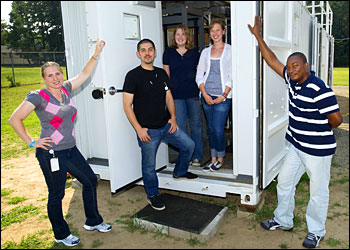 ARM students gather for work near a SeaTainer

Five college students from around the country have traded the lazy, hazy days of summer for an opportunity to analyze the haze itself.

During their 10-week internship at BNL, these five students participated in a campaign to measure the concentration, chemical composition, size, shape, and optical properties of tiny particles in the atmosphere called aerosols. This work, conducted at Brookhaven, is supported by the U.S. Department of Energy’s Atmospheric Radiation Measurement (ARM) program.

“Aerosols are neither altogether good nor bad, but they’re very important for environmental scientists to try and understand,” says University of Illinois student Danielle Weech. “On one hand, aerosols play a major role in causing cloud formation and reducing solar radiation, which helps provide an overall ‘cooling’ effect for our planet. But on the other hand, some types of aerosols contribute to global warming by absorbing the sun’s heat rather than bouncing it back to space.”

Currently, atmospheric scientists know a lot more about how greenhouse gases like carbon dioxide and methane affect the environment than they do about the role — that is, the many roles — aerosols play.

“Some aerosols act as direct influences on climate change by limiting or enhancing solar radiation, but others have a more indirect effect,” says Erika Schreiber, a student from Cornell University. “Aerosols provide particles for water droplets to cling to in the air, which is how clouds form, and clouds deflect sunlight. Then, if too many particles are concentrated in the same cloud, water molecules can’t form droplets big enough to rain down. This inability to precipitate increases cloud lifetime and brightness — good news for global warming — but it also disrupts the water cycle, which can have a major impact on the weather in urban environments and places with a lot of industry or volcanic activity.”

To test theories of how aerosols contribute to global climate change, researchers at Brookhaven designed and built four mobile laboratories capable of conducting long-term measurements anywhere in the world. Three of these “SeaTainers” are currently deployed in BNL’s meteorological field (just east of the fire department) as part of a science measurement program and a system “shake-out.”

The ARM summer students are important players in a joint project between Brookhaven Lab and environmental researchers around the world, as they’ve been the ones testing the equipment that will eventually help scientists develop better models of how aerosols affect the environment. Since late June, they’ve been maintaining a wide variety of the instruments in the SeaTainers and collecting and analyzing data on the aerosols in the atmosphere over Brookhaven Lab.

“The point of putting all these instruments together in one place is to help scientists gather more of the puzzle pieces they need to see the bigger picture,” says Tony Aguirre, an electrical engineering student from City College of New York. “We’re looking at what’s in the atmosphere, where it came from, and how it got there. This is a great study to do on Long Island because the air quality really changes based on the intensity of the wind and where it’s coming from. Ocean aerosols have a lot of minerals, whereas wind from the city contains more carbon from emissions, and wind from the northeast brings biogenic material from plants and animals.”

“Each one of the students has been working on a different aspect of this project,” says Arthur Sedlacek, one of the project’s supervisors. “They’ve been doing pretty much everything on their own and are well on their way to becoming real atmospheric scientists.”

The students will use this data to help researchers at Brookhaven characterize Long Island aerosols and test the robustness of their models, and many of them plan to continue analyzing the data they collected for their own projects when they return home.