Promoting Diversity ― on the Atomic Level

They come from the midst of exploding stars beyond our solar system — and possibly, from the nuclei of far distant galaxies. Their name, “galactic cosmic rays,” sounds like something from a science fiction movie. They’re not really rays.

The Electron Beam Ion Source, a modern, compact ion injector will feed new kinds of particles to RHIC and NSRL.

Galactic cosmic rays (GCR) is the term used to describe a wide variety of charged particles traveling through space at high energies and almost the speed of light, from subatomic particles like electrons and positrons to the nuclei of every element on the periodic table. Since they’re created at energies sufficient to propel them on long journeys through space, GCRs are a form of ionizing radiation, or streaming particles and light waves with enough oomph to knock electrons out of their orbits, creating newly charged, unstable atoms in most of the matter they traverse.

Unfortunately for astronauts going on missions outside the protective arms of Earth’s atmosphere and magnetic fields, both of which shield us from high-energy space radiation, GCRs may live up to their ominous alias when they collide with the atoms inside living cells, possibly damaging cells’ ability to repair and reproduce properly. These interactions can lead to the types of mutations that cause cancer, tumors, genetic defects in offspring, blindness, and even death.

Researchers at the NASA Space Radiation Laboratory (NSRL) at Brookhaven Lab have been working to determine the type and extent of the biological risks astronauts on long-term missions in space face from exposure to GCRs and other types of space radiation (like proton-dense solar flares). At NSRL, researchers simulate space-based environments by using beams of charged particles extracted from Brookhaven’s Booster particle accelerator to irradiate living cells, tissues, DNA (suspended in solution), and biological specimens.

But because of their heterogeneous nature, creating the laboratory counterpart of a GCR has been a real challenge. Until recently, NSRL researchers could only use a single species of particle beam on any day, and their choice of elements was limited by the fact that Brookhaven’s long-time heavy ion preinjector, the Tandem Van de Graaff, is only designed to work with certain types of atoms.

“What the Tandem does, it’s been doing very well for many years,” says Collider-Accelerator Department (C-AD) physicist Jim Alessi, “and that’s to supply beams of heavy ions to the Relativistic Heavy Ion Collider and NSRL. But since the atoms provided by the Tandem have to be negatively charged before they can be accelerated, they must be capable of taking on an extra electron, which not all elements can do.”

Noble gases, for instance, resist the addition of electrons to their atomic structure and can’t be accelerated by the Tandem, so these common components of GCRs have been unavailable for study at NSRL until this spring, when the new Electron Beam Ion Source (EBIS), first came online.

Jointly funded by NASA and the U.S. Department of Energy’s Office of Nuclear Physics, the new $20-million preinjector for RHIC and NSRL is capable of making and accelerating ions of almost every element in the periodic table. 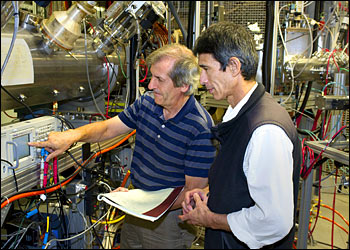 “It’s a big improvement,” says C-AD physicist Adam Rusek. “We’re trying to look at how living cells and DNA react to the kinds of exposure to radiation we don’t get on Earth — and energetic ions of everything are out there in space. Of course, nobody is going to run an experiment using all the elements on the periodic table, but now we can provide many more particles than we could with the Tandem accelerators, which is more representative of galactic cosmic rays.”

EBIS is also capable of switching very quickly between different species of ions, so soon NSRL researchers will be able to integrate multiple ions into a single simulation, rather than waiting for another element to become available.

“We’ve already shown through our research at NSRL that live cells elicit different gene expression patterns based on the kinds of radiation they’re exposed to,” says NASA biologist Michael Story. “The frequency of cell transformation is much higher with energetic heavy ions than it is with x-rays or gamma rays. These types of transformations are the first step in the carcinogenic process, which can lead to cancer. Our goal now is to perform further studies of space radiation so we can determine with better accuracy what the risks are for astronauts spending longer and longer amounts of time in space — and to test and develop better protective measures against those risks.”

Brookhaven physicists provide the starting particles for EBIS by producing a singly charged beam of the desired ions in an external ion source, and shooting these charged atoms into a one-and-a-half-meter tube inside a high-powered magnetic field, called the “trap.”

Here, the particles are held and stripped of even more electrons by a high current electron beam, raising their charge from +1 to about +32 (for gold ions). After reaching the desired charge (which only takes a fraction of a second), the particles are released from the trap and the resulting beam is passed to the first of two radio frequency accelerators, which use the electric field from radio waves to “push” particles to a high velocity before they’re sent to the Booster, from which they’re transported to RHIC or NSRL.

“EBIS is the result of a long and fruitful relationship between the Department of Energy and NASA,” said Derek Lowenstein, previous chair of C-AD and NSRL principle investigator, who wrote the original proposal for EBIS more than 20 years ago, “This is a major achievement for DOE, NASA, BNL, and the experimental community. It’s a win-win situation for everyone.”