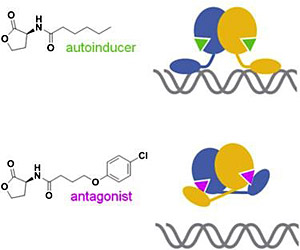 Among the complex molecular processes involved in the development of bacteria-borne disease is quorum sensing, the way bacteria communicate and coordinate collective behaviors. By studying how to inhibit quorum sensing, scientists may be able create antibacterial pharmaceuticals for a variety of ailments.

Recently, in part due to work performed at NSLS, researchers from Princeton University and the Howard Hughes Medical Institute learned how to block a quorum-sensing mechanism in the bacteria Chromobacterium violaceum, commonly found in tropical soils and water. Although this pathogen rarely infect humans, the group's success indicates that their work could lead to therapeutics for diseases caused by other bacteria types.

“The protein we studied has a close homolog in Pseudomonas aeruginosa, a bacteria that causes particular trouble for cystic fibrosis patients,” said the study's lead scientist, Princeton University molecular biologist Frederick Hughson. “We’re hoping that the strategy we’ve discovered might also work there.”

During quorum sensing, bacteria produce, detect, and exchange signaling molecules known as autoinducers. This process is crucial to disease development because it ultimately controls the way that bacteria express “virulence factors” — the molecules that enable the bacteria to colonize a host, evade and compromise the host's immune response, exit and enter cells, and obtain nutrients.

Hughson and his group studied an autoinducer known as C6-HSL, which C. violaceum detects using a receptor of the “LuxR” family of proteins, found in the cytoplasm of many pathogens. Without an autoinducer present, the LuxR protein, known as CviR, is unstable and is degraded by cellular proteases. But bound to C6-HSL, CviR is stabilized and activated. The receptor:autoinducer complex then binds to specific sites along the cell's DNA, “turning on” the bacterium's virulence genes.

In previous work, Hughson’s Princeton colleague, Bonnie Bassler, identifed a molecule that strongly inhibits quorum sensing by binding to CviR in place of the autoinducer, thus “antagonizing” the process. Quorum-sensing antagonists represent potential lead molecules in the search for new anti-bacterial therapeutics. Especially intriguing is the possibility that bacteria would be less likely to develop resistance to an anti-quorum-sensing drug, because, rather than killing bacteria, it simply keeps them from behaving badly (i.e., expressing virulence genes).

The researchers used x-rays at NSLS to “see,” for the first time, the molecular structure of a quorum-sensing receptor bound to an antagonist of their target. The resulting x-ray crystal structures showed that the antagonists function by stabilizing an inactive conformation of the receptor protein. This information should be valuable in designing second-generation quorum-sensing antagonists with improved functional properties.

This work was published in the April 22, 2011, online edition of Molecular Cell.