Few birds are simultaneously so handsome and so hideous. The plumage of a tom (male) turkey in his full splendor is an embodiment of autumn, his feathers alight with gilded accents and smoldering bronze — it’s a shame they breed in spring. Yet, if one’s eye wanders upwards … gah!

A tiny head, awash in angry red, featherless and wrinkled. A blue face with beady eyes. Black eyes. To quote an ill-fated fisherman from Amity: “like a doll’s eyes.”

And then there’s the snood — that weird, fleshy thing dangling over his bill.

In short, turkeys are hard to miss, particularly here at Brookhaven National Lab where they peck at the ground around buildings housing particle colliders and supercomputers.

My turkey adventure started on a recent Friday evening after work, when a lone bird wandered onto the concrete path that leads from Cavendish House dormitory to Upton Road, beneath my window. I may not have noticed the bird if not for the croaking sounds it made. Leaning against the screen, I did my best to imitate the guttural sound the turkey had just made. The poor animal spent the next several minutes trying to identify the source of the sound. 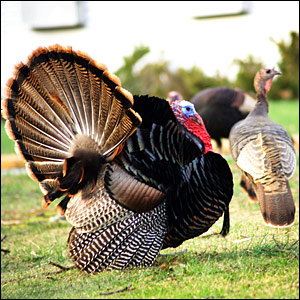 A tom turkey in all his glory

I must have made an impression, though, because the following Sunday evening, I was dealing with an embarrassment of turkey. They came from the general direction of the police department, making enough of a commotion simply by moving through the undergrowth that I thought for a moment that some people must have been traipsing around the forest outside.

No people, just turkey — sixteen of them, to be precise, moving in a loose group across the property. It was interesting to watch them forage together, seeing how they all kept relatively the same distance from one another, each pausing momentarily to peck at the ground whenever it spotted something appetizing. All the scene needed was a bit of David Attenborough narration, and it would’ve made a great nature documentary.

Sadly, Sir Attenborough wasn’t available, and the only narration I got was a friend dubbing me “Turkeylord” upon hearing about my latest wildlife encounter. I suppose, as Turkeylord, it’s my duty to espouse some turkey knowledge.

There’s a rather popular story among ornithological elitists about Ben Franklin’s preference for the turkey as the national bird of the United States. The bald eagle is a craven creature, Franklin’s purported argument goes, pilfering prey from honest ospreys. The noble turkey, on the other hand, is a true American, foraging for its own food. Franklin’s endorsement of the turkey may be overstated, but there’s certainly something to be said for sticking up for this bird.

To most of us theses days, the turkey is two things: (1) the go-to mascot for any Thanksgiving-related marketing, and (2) delicious. Some of us may also remember it as the easiest animal to draw using the outline of a human hand.

But the turkey is also a conservation success story. It’s very easy to forget this, because of the speed at which they rebounded and the fact that they retained cultural prominence even as their wild populations vanished. They started as a ubiquitous American species, were pushed to the brink at the turn of the century due to hunting and habitat loss, and have since bounced back to near-ubiquity with what is, in ecological terms, breakneck speed.

New York, in particular, was free of wild turkey for a century, from the 1840s through the 1940s. BNL’s population of turkey is largely from a wildlife re-introduction that took place off-site in 1996. As winter approaches, the birds will gather into larger and larger flocks — the largest recorded at BNL was over 100 birds!

So when Thanksgiving rolls around again this year, I’m going to give thanks for the continued existence of such a striking — and, yes, delicious* — bird.

*Note: Please get your turkey from a store or a proper hunting site — BNL is neither.