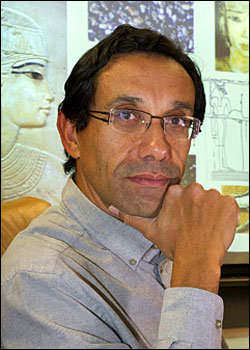 Think of eye makeup in ancient Egypt — or pigments and concealed details under the surface of renowned masters’ oil paintings — or the Mayan Blue pigment that survives to this day on the walls of ancient temples of Mesoamerica. These fascinating items from the world’s cultural heritage have one thing in common: all are subjects of scientific investigation using synchrotron light techniques at facilities such as the National Synchrotron Light Source (NSLS).

To find out more about how scientists use synchrotron techniques to study rare or intriguing artifacts and how these findings benefit the modern world, join Eric Dooryhee of the Photon Sciences Directorate as he gives the 472nd Brookhaven Lecture, titled “Ancient Materials and Artworks Illuminated by Synchrotron Light.” The talk will be given on Thursday, November 17 (note unusual day), at 4 p.m. in Berkner Hall. The event is free and open to the public, with refreshments before and after the talk. Visitors to the Lab 16 and older must carry a photo ID.

As Dooryhee will explain, a synchrotron is an exceptionally powerful source of “light” (from x-rays to infrared), which permits fast, sensitive experiments to be done without damage on minute samples of objects, using a range of analytical techniques and allowing measurements to be made below the surface. Lately, researchers examining historic artifacts have developed advanced methods and instrumentation that can also help in diagnosing deterioration processes with a view to inventing protective treatments.

Dooryhee will show how these techniques, including several that he has worked with himself, have shed light on whether ancient eye makeup could have been a medicine, and on the cause of darkening pigments in paintings such as Van Gogh’s “Sunflowers” or Matisse’s “Le Bonheur de Vivre,” as well as on how to uncover artwork concealed beneath paintings, and how to mimic Mayan Blue to produce durable, non-toxic modern pigments.

If there is time, he can also talk about preserving historic timbers of shipwrecks or the secret composition of varnishes on Stradivari violins.

Eric Dooryhee joined BNL in June 2009 to help build the x-ray powder diffraction beamline at the National Synchrotron Light Source-II (NSLS-II). He has a master’s degree in hard condensed matter physics and crystallography, and a Ph.D. in radiation physics, both from the University of Paris. He has specialized in powder diffraction at most of the research facilities where he has worked, including the Synchrotron Radiation Source at Daresbury, U.K.; the Interdisciplinary Research Center with Ions and Lasers in Caen, CNRS, France; the European Synchrotron Radiation Facility in Grenoble, France; and the Neel Institute, CNRS, also in Grenoble.

Since 2005, Dooryhee has run a series of international conferences called SR2A, for Synchrotron Radiation in Art & Archaeology. The last conference was at the Van Gogh Museum of Amsterdam, in November 2010. The next conference, SR2A 2012, which is co-organized by BNL, will be right in New York City at the Metropolitan Museum, June 6-8. Learn more at https://www.bnl.gov/sr2a/.