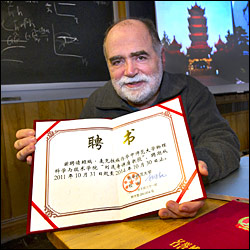 Chalk up a second Ph.D. for BNLer Larry McLerran of Brookhaven’s Physics Department. McLerran, the Theory Group leader for the RIKEN Brookhaven Research Center, has received an honorary Ph.D. and professorship from the Central China Normal University (CCNU).

At Brookhaven, McLerran specializes in quantum chromodynamics (QCD) — the theory of interactions between subatomic quarks and gluons. This applies to the description of matter made in the early universe.

McLerran was selected to receive these honorary awards for his contributions in the field of theoretical physics for high-energy collisions, and particularly for advancing QCD science in China.

A celebration was held for McLerran on November 6, 2011, at CCNU, which is located roughly 400 miles west of the Pacific Ocean in China’s Wuhan province. Among the attendees were dignitaries from China’s Ministry of Education and CCNU, as well as colleagues and students.

McLerran’s professorship was named after his friend Liu Lian Shou, the late physicist and former director of the Institute of Particle Physics in CCNU’s College of Physical Science and Technology. It includes a grant that McLerran can use to help develop physics students in China into international physics collaborators who can participate in experimental and theoretical work related to Brookhaven’s existing Relativistic Heavy Ion Collider (RHIC) and to the proposed future eRHIC.

“This is a very active area of scientific research where there is much potential for discovery. You get good ideas from young people whose backgrounds allow them to think about things in different ways,” McLerran said.

McLerran doesn’t speak Chinese, but he has traveled to China several times since his first visit in 1983. During his first visit, he traveled to a nation that was in the early stages of building a physics program following the changes in policy after the Cultural Revolution. McLerran gave several talks at a high energy physics workshop organized by Liu at CCNU. McLerran followed Liu’s work and kept warm relations until Liu’s death, as well as with a number of other colleagues that he met during his visits to China.

Nu Xu, the current dean for CCNU’s College of Physical Science and Technology, is a scientist at Lawrence Berkeley National Laboratory and the spokesperson for the STAR collaboration at RHIC. Xu created the professorship in honor of Liu and nominated McLerran to be the first honoree and to receive the honorary Ph.D. Those who also wrote letters supporting McLerran’s nomination for the honorary Ph.D. included Nicholas Samios, former BNL director and director of the RIKEN BNL Research Center; T.D. Lee, a collaborator in Brookhaven’s first Nobel Prize and currently a professor at Columbia University; Jean-Paul Blaizot of France’s Commission for Atomic Energy and Alternative Energies; and E.K. Wang, of CCNU.

“Larry was among the few first foreign scientists who visited China soon after the Cultural Revolution,” Xu explained. “This honorary Ph.D is a big deal, because it had to be approved by the State Council’s Academic Degrees Committee, which is part of the Chinese government. Not many more than 200 people have been awarded these honorary degrees. Larry is a well-known high energy physicist who can help to boost QCD physical science in China and strengthen our University’s reputation.”

McLerran and Xu’s future plans include teaming with Xin-Nian Wang, a theorist from Lawrence Berkeley National Laboratory and CCNU, to write a book on high-energy nuclear collisions.

McLerran earned his first Ph.D. for physics in 1975 from the University of Washington. He also worked as a research associate at the Massachusetts Institute of Technology from 1975 until 1978, and then at Stanford Linear Accelerator Center from 1978 until 1980. From 1980 until 1984 he was an assistant and associate professor at the University of Washington. From 1984 until 1989, he was a scientist at Fermi National Accelerator Laboratory. He taught as a professor from 1988 until 2000 at the University of Minnesota, while also serving as a member and director of its Theoretical Physics Institute.

McLerran arrived at Brookhaven Lab in 1999 as a senior scientist and led the Nuclear Theory Group until 2004. In 2003, he became the theory group leader for the RIKEN Brookhaven Research Center.

In addition to his new honorary Ph.D. and professorship, McLerran has received a number of awards during his career, including a Brookhaven Science and Technology Award in FY2007 — one of the Laboratory’s most distinguished prizes awarded for the exceptional nature of an employee’s contributions as well as the level of difficulty and benefit for Brookhaven.

McLerran is also a fellow of the American Physical Society and a foreign member of the Finnish Academy of Arts and Sciences. He was an Alexander Sloan Foundation Fellow, was awarded the Alexander Humboldt prize in 1988, and received the Hans Jensen prize at the University of Heidelberg in 2009, where he is a Jensen Professor of Theoretical Physics.