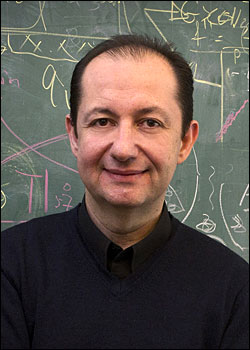 In the field of nanoscience, if you can control how nanoparticles self-assemble in particular structures — joining each other, for example, as molecules can form, atom-by-atom — you can design new materials that have unique properties that industry needs.

Nature already uses the DNA genetic code to instruct the building of specific proteins and whole organisms in both plants and people. Taking a cue from nature, scientists at BNL devised a way of using strands of synthetic DNA attached to the surface of nanoparticles to instruct them to self-assemble into specific nanoscale structures, clusters, and three-dimensional organizations. Novel materials designed and fabricated this way promise use in photovoltaics, energy storage, catalysis, cell-targeted systems for more effective medical treatments, and bio-molecular sensing for environmental monitoring and medical applications.

To find out more about the rapid evolution of this nanoassembly method and its applications, join Physicist Oleg Gang of the Center for Functional Nanomaterials (CFN) as he gives the 474th Brookhaven Lecture, titled “Self-Assembly by Instruction: Designing Nanoscale Systems Using DNA-Based Technique,” on Wednesday, January 18. All are welcome to this free lecture, which is open to the public and will be held at 4 p.m. in Berkner Hall. Refreshments will be served before and after the event. Visitors to the Lab 16 and older must carry a photo ID. To accompany the lecturer to supper at a restaurant off site after the lecture, contact Lois Caligiuri, loisc@bnl.gov or Ext. 5415.

Gang, who has led this work at the CFN, will explain the rapid evolution of this nanoassembly method, and discuss its present and future applications in highly specific biosensors, optically active nano-materials, and new ways to fabricate complex architectures in a rational manner via self-assembly. Gang and his colleagues used the CFN and the National Synchrotron Light Source (NSLS) facilities to perform their groundbreaking research. At the CFN, the scientists used electron microscopes and optical methods to visualize the clusters that they fabricated. At the NSLS, they applied x-rays to study a particles-assembly process in solution, DNA’s natural environment.

Gang earned a Ph.D. in soft matter physics from Bar-Ilan University in 2000, and he was a Rothschild Fellow at Harvard University from 1999 to 2002. After joining BNL as a Goldhaber Fellow in 2002, he became an assistant scientist at the CFN in 2004. He became the CFN’s leader for Soft and Biological Nanomaterials Theme Group in 2006, and earned the title of scientist in 2009. Gang has received numerous honors and recognitions, including the 2010 Gordon Battelle Prize for Scientific Discovery.