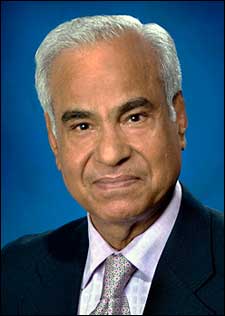 At the conference, Srivastava delivered two invited keynote lectures, “Paving the Way to Personalized Medicine: Production of Certain Promising Theragnostic Radionuclides at Brookhaven National Laboratory” and “High-LET Radionuclides for the Molecular Imaging and Therapy of Cancer and Active Atheromatous Disease.”

Said Srivastava, “It was an honor and a pleasant surprise to receive this award and to talk about the research at Brookhaven and several collaborating institutions, in particular U.C. Irvine and U.C. Davis, that has led to our developing the concept of ‘theragnostic,’ or dual-purpose, radiopharmaceuticals. Our work is producing ideas for the future that may very well empower the age-long dream of performing personalized or ‘tailored’ medicine, which will entail diagnostic imaging followed by therapy in the same patient with the same radiopharmaceutical.”

For over three decades, Srivastava has been active in the development of radioactive metals to diagnose and treat disease. His long-term development of dual-purpose radionuclides, in particular tin-117m, which can be used in both the imaging and therapy of cancer and many other diseases that respond to radionuclide therapy, could enable the increased personalization of medical care.

When he first came to BNL in 1975, Srivastava worked on the use of the technetium-99m tracer in medical imaging. He went on to lead the Radionuclide and Radiopharmaceutical Research Division and the Medical Department’s technetium chemistry group in 1983. Around this time, Srivastava played a leading role in the instant technetium-99m red-blood-cell labeling kit’s development. Commercially known as UltraTag RBC, the kit began to be marketed in 1991. It quickly became, and still remains, as a valuable resource in cardiovascular imaging procedures.

In recent years, Srivastava has been a leader in the development of a pain-relieving treatment for bone cancer using tin-117m. The isotope is also undergoing commercially sponsored clinical trials for use in both the imaging and treatment of coronary artery disease. Srivastava has also for many years been involved in developing radiolabeled monoclonal antibodies and viral vector systems for the imaging and therapy of cancer. In addition, he has investigated the use of positron-labeled stem cells for the imaging of their trafficking and biodistribution.

Srivastava received his Ph.D. in inorganic and analytical chemistry from the University of Allahabad, India, in 1961. His achievements and honors include the 1986 Industrial Research-100 (now called the R&D 100) award, which recognizes the 100 most significant new technologies of the year, the Federal Laboratory Consortium Award in 1988; the Special Recognition Award of the Chilean Society of Biology and Nuclear Medicine in 1989; the BNL Distinguished Research & Development Award in 1995; the Radiopharmaceutical Sciences Council Distinguished Service Award in 1999; the Indo-American Society of Nuclear Medicine Lifetime Achievement Award in 1999; and the 2003 Battelle Distinguished Inventor Award. He has published more than 220 refereed journal articles, 360 abstracts, 26 book chapters, and many seminal review articles. He is the inventor or co-inventor of 29 patented and three statutory inventions. In September 2010, he received the Lifetime Achievement Award at an ISRS (International Society of Radiopharmaceutical Sciences) sponsored symposium in Bressanone, Italy. At the same time, he was honored with the University of Padova’s Gold Medal in recognition of his continued role in the advancement of basic sciences in nuclear medicine.