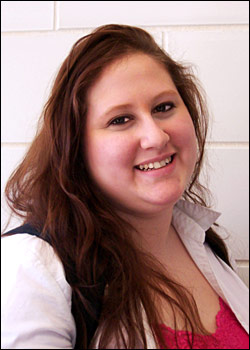 Last month, the Laboratory announced two Intel Science Talent Search semifinalists who did research with mentors at Brookhaven Lab. Since then, we received word that Amelia Morales of Kings Park was also named a semifinalist in the Intel contest for research she did with Nelly Alia-Klein of the Brookhaven’s Medical Department.

Alia-Klein mentored Morales, a senior at Kings Park High School, during the summer of 2011. Morales’s project was titled Monoamine Oxidase A Genotype Associated with Negative Emotions in Cocaine Addicted Individuals: A Gene by Disease Interaction. With Alia-Klein, she developed statistical models for studying an enzyme that breaks down neurotransmitters in the brain and affects how people — particularly those addicted to cocaine — develop negative emotions and respond to stress.

Alia-Klein said, “Not only does Amelia have the capacity to understand the analytical data of genetics, statistics, and psychology, she also has the creativity to draw from these different disciplines, make sense of it all, and make a difference.”

Many high school students, including Morales, come to BNL through OEP’s High School Research Program. The program gives 11th and 12th grade students an opportunity to work with BNL scientists and participate in important ongoing research and development programs.

“Brookhaven’s High School Research Program fosters a love for science and research among our students who participate,” said Mary Ellen Fay, research advisor at Kings Park High School. “Dr. Alia-Klein treated Amelia as a member of her lab, giving her the opportunity to work through complex problems that she was capable of solving and, most importantly, grow as a scientist.”

On January 25, 40 of the 300 Intel semifinalists were invited to compete this March in Washington, D.C. for the top award of $100,000. Five of these finalists were from Long Island, including Anna Sato — daughter of Yimei Zhu of the Laboratory’s Condensed Matter Physics and Materials Science Department — for research she did in Stony Brook University’s Chemistry Department. Morales and the other two seminalists who did research at Brookhaven, Ross Shulman and David Wu, were not selected as finalists, but as semifinalists, they won $1,000 each and their school districts were also awarded $1,000.