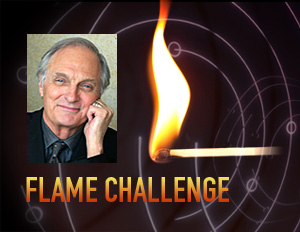 That’s what an 11-year-old Alan Alda asked his teacher 65 years ago. Today, the famed actor, founding member of the Stony Brook University School of Journalism’s Center for Communicating Science and Visiting Professor in the School of Journalism is still waiting for a clear answer.

To get it, in a guest editorial in the March 2 issue of Science, Alda issued “The Flame Challenge” to scientists: give an 11-year-old-friendly explanation of what a flame is.

Alda’s hope is that today’s researchers are better equipped to communicate knowledge and instill a love of science in children.

“The natural curiosity of a child can be both the beginning of the next generation of science, and a stimulating challenge for this generation’s scientists to communicate with clarity and imagination,” Alda said. This editorial challenge began the month-long contest wherein submissions will be judged by a panel of 11-year-olds, after a panel of scientists evaluates them for scientific accuracy.

The contest is open for entries, including from the Brookhaven Lab community, from March 2 to April 2. The submissions may be in writing, video, or graphics, playful or serious, as long as they are accurate and connect with the young judges. The winners will be announced in June. For more information and entry forms, visit www.FlameChallenge.org.

“We’re also asking children to email us with other questions they would like scientists to answer,” said Elizabeth Bass, Director of the Center for Communicating Science. “We’ll select one for our next Flame Challenge. This is a fun way to help both scientists and kids learn new things about science.” Questions can be emailed to communicatingscience@stonybrook.edu.

This contest is not Brookhaven’s first interaction with Alda and Stony Brook’s School of Journalism. At an April 2010 workshop at the Lab, Alda worked with Brookhaven Lab scientists to help improve their communication with the public about their research, about how science works, and why it matters. And the Lab, with Cold Spring Harbor Laboratory, gives students in SBU’s Master of Science Program in Journalism, a graduate program focused on coverage of health, the environment, science and technology, access to advanced research and leading scientists.