The final piece of structural steel — a bright white I-beam adorned with John Hancocks from members of the Department of Energy (DOE), Brookhaven Lab, and several contractors — was bolted in place at the Laboratory’s future Interdisciplinary Science Building (ISB) following a small “Topping Off” ceremony held on Monday, March 5. 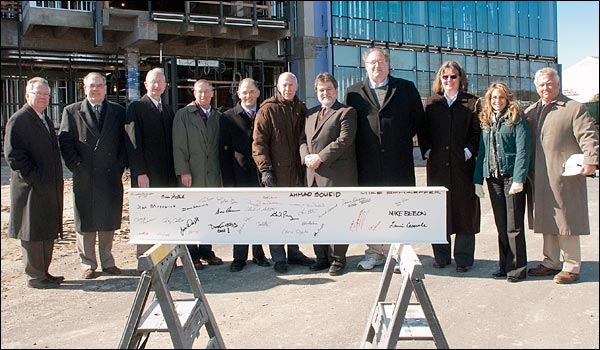 The ISB, which is on track to be completed by the end of 2012, is an 87,701-square-foot facility that will be a hub for researchers applying their scientific specialties to drive solutions to the nation’s energy challenges. The building will contain nearly 60 laboratories, two with very unique features: a dry room with finite humidity control for assembling new batteries, and an “Oasis” laboratory — an ultra-low vibration laboratory that will provide the stability required for a cutting-edge “MIRAGE” Spectroscopic Imaging Scanning Tunneling Microscope. There, scientists will be able to grow samples within a vacuum-locked system and then transport them to the microscope without breaking the vacuum’s seal.

The building is also on track to be the Laboratory’s first facility to receive a Leadership in Energy and Environmental Design Gold certification rating from the U.S. Green Building Council. This rating is awarded to buildings that are designed, built, and operated using high-performance and environmentally sustainable practices.

The Lab’s Modernization Project Office (MPO) managed the ISB’s design, and is overseeing its construction. General contractor E.W. Howell is building the structure and HDR Architecture, Inc. designed the building. Funding for the facility was provided by the DOE Office of Science and the American Recovery and Reinvestment Act.

MPO Manager Michael Schaeffer kicked off the ceremony, which was held at the construction site.

“This building represents a lot of things to a lot of people,” said Michael Holland, manager of the DOE Brookhaven Site Office. “The reason the Department of Energy continues to fund facilities at Brookhaven National Laboratory is because you’ve shown, over the years, how successful you can be in partnering to build state-of-the-art facilities.”

Laboratory Director Sam Aronson said, “This is a place for our energy research assets to come together and create the synergy around the Laboratory’s strategic vision. It represents so much of what’s new and what’s right about the direction of the Laboratory.”

“This is a gigantic step for us along discovery to deployment and it’s going to have real impact on Brookhaven and the nation’s energy equation, so we’re pretty excited,” added Deputy Laboratory Director for Science & Technology Doon Gibbs.

Associate Laboratory Director for Basic Energy Sciences Jim Misewich, a future tenant in the ISB, spoke next. He discussed how the dry room and Oasis lab will enable new breakthroughs in energy, from synthesizing new superconducting materials that transmit electricity without losing any energy, to materials that can store electricity generated by intermittent sources such as the sun and wind. 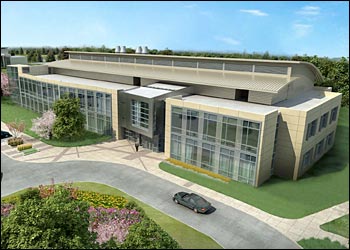 A rendering of Brookhaven Lab’s future Interdisciplinary Science Building, a hub for energy research that is on track to be completed by the end of 2012

“The very special laboratories in this building are going to allow us to do things that no other laboratory in the world can do,” he said.

In addition to offering his congratulations to the project team on project progress, Deputy Lab Director for Operations Mike Bebon expressed appreciation for the team's attention to safe construction practices. He went on to note that much work remains and the emphasis on safety must continue.

Ahmad Soueid, principal and senior vice president at HDR Architecture, Inc. — the architect and engineer responsible for designing the ISB — said, “The collaboration between the project management team at BNL, the scientific team, the contractors, and our architects at HDR has been great, and we are looking forward to being a part of scientific history made in the future.”

ISB Project Manager Peggy Caradonna was the last to speak.

“We are now one step closer to being able to turn over a state-of-the-art laboratory to our scientific staff at BNL,” she said. “So far, more than 85,000 hours have been worked to construct this building, and I thank everyone for keeping a special emphasis on working safely.”

Caradonna also thanked team members from BNL, DOE, E.W. Howell, and HDR who were involved in maintaining the project’s momentum as they work toward their goal of completing construction by the end of 2012.