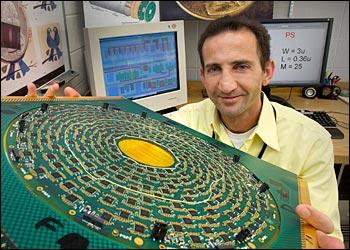 Think of the tiny capacitors, transistors, and other electronic components that allow us to make phone calls from the freezer section of the grocery store and provide three-dimensional images of our insides that doctors can use to diagnose health problems.

Just as the microelectronics inside these devices are shaping — and even saving — our lives, they can also be used as special sets of eyes for scientists exploring what would otherwise be invisible, from the ultra small to the ultra far away. The Instrumentation Division at Brookhaven Lab custom builds some of the world’s most advanced microelectronics for scientists investigating the unknown.

On Wednesday, March 21, join Gianluigi De Geronimo of the Instrumentation Division for the 476th Brookhaven Lecture, titled “Microelectronics for Science — Enabling New Detectors.” All are invited to attend this free talk, which is open to the public and will be held in Berkner Hall at 4 p.m. Refreshments will be offered before and after the lecture. Visitors to the Lab 16 and older must carry a photo ID while on site.

During his talk, De Geronimo will discuss the basic principles of microelectronics, how they have become smaller and faster since the 1960s, and how designers may increase the speed of microelectronics after they can’t be made any smaller. He will then explain how the Instrumentation Division collaborates with scientists to develop unique application-specific integrated circuits for detectors that enable discoveries, push research, and change lives.

De Geronimo earned a Ph.D. in electronics and communications from Milan Polytechnic in Italy in 1997. That same year, he arrived in Brookhaven Lab’s Instrumentation Division as an assistant scientist. He was promoted to associate scientist in 1999 and to scientist, electronics engineer in 2002.