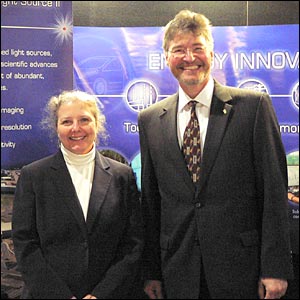 The Technology Showcase, open each evening, was crowded with researchers and representatives from energy businesses and other organizations eager to learn about each others’ programs. Kimberley Elcess from Brookhaven’s Office of Technology Commercialization and Partnerships (OTCP) said that visitors to the Brookhaven booth were particularly interested in hydrogen storage, battery systems, nanocatalysts, fuel cells, and solar technologies among the many BNL offerings.

“Thermoelectric materials have gotten a lot more buzz than I expected,” she said, “and I believe it’s because we have shown we have actually fabricated a module, which actually demonstrates something that works. So we need to continue to show the applications of our research to interest industry.”

OTCP Director Walter Copan, who was attending the Summit for the first time, was impressed.

“The entire scale of the ARPA-E meeting was something unexpected to me,” he said. “It brought together a veritable ‘Who’s Who’ of players in the energy sector – government, and energy technology providers, as well as corporations large and small dealing with various aspects of the energy challenge. ARPA-E provided a stimulating environment with high intensity that’s a great source of networking for future collaboration opportunities with Brookhaven Lab.”

The Summit was preceded by a daylong technology developers’ workshop which included focused sessions about existing programs, presented by ARPA-E program directors, fellows and “technology-to-market” advisors.

During the two-day Summit, ARPA-E Director Arun Majumdar welcomed participants and Energy Secretary Steven Chu, who introduced the first day’s activities, delivered a keynote address on what the Department is doing to solve the energy challenge. “The answer,” he said quoting President Obama, “is all of the above.”

Chu illustrated the arc of U.S. scientific competitiveness by pointing out that the War Department made the government’s first $80,000 investment in development of the airplane early in the 20th century, only to be bested by the Wright Brothers, who spent far less. Congress was “outraged,” Chu joked. But although the U.S. invented the airplane, it lost the lead quickly, he said, because between 1908 and 1913, this country ranked 14th in scientific investment in aviation, well behind many less-developed countries.

Henry Ford, he pointed out, did not invent the automobile; he just improved the assembly line so his company could make a quality product that people could afford. He also campaigned against environmental pollution, at that time from horses. Investment, diversification and a focus on efficiency and the environment will bring opportunity for a second Industrial Revolution, he said.

Chu also participated in a conversation, termed a “Fireside Chat,” with Bill Gates. Gates said he believes U.S. energy research is currently underfunded by a factor of two, a level he described as “not serious. It’s crazy how little we’re funding energy,” he said. “Improvement in the lives of the poorest among us depends on cheaper energy. It’s one of the three or four things you want most. If we get very inexpensive batteries and affordable photovoltaics, they will go viral like cell phones did.”

“They managed to stay off the politics and stay with the science and what needed to happen for commercial impact in energy markets,” she said.

On the following day, the audience heard from former President Bill Clinton, and Copan said he found the speech impressive.

“Clinton shared a practical viewpoint to deal with funding for energy alternatives, and the integration of the energy, climate and economic factors in this country and around the world,” he said.

Of the meeting as a whole, Elcess said she was pleased to see the extreme focus on technology, the future and “that we can do it. This has been a very optimistic group,” she said. “I was surprised since the economy is so poor, but these people are so excited about energy technology and believe so strongly in what they’re doing that nothing else really matters.”