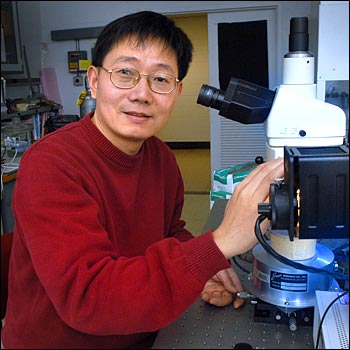 Scientists from the Chinese Academy of Science’s Shanghai Institute of Ceramics, in collaboration with scientists from the U.S. Department of Energy’s (DOE) Brookhaven National Laboratory, the University of Michigan, and the California Institute of Technology, have identified a new class of high-performance thermoelectric materials — materials that convert heat to electricity or vice versa. In the material described in a paper published in Nature Materials on March 11, 2012, liquid-like copper ions carry electric current around a solid selenium crystal lattice. The research offers a new strategy and direction for developing high-efficiency thermoelectric materials, which have a wide range of potential applications — including systems that convert solar energy and/or waste heat from engines and industrial processes directly into useable electricity.

“About 60 percent of the power we get from primary energy sources today goes to waste, mostly in the form of heat,” said Brookhaven physicist Qiang Li, leader of Brookhaven’s Advanced Energy Materials Group and a co-author on the paper. “If we can recover that waste heat as electricity, it would be a huge economic benefit.”

In the best thermoelectric materials, electric charge carriers such as electrons move easily from an area of higher temperature to lower temperature, as long as a difference in temperature is maintained. One key to maintaining the heat gradient, even at the high temperatures found in automobile engines, is to use materials with low thermal conductivity.

Many groups have made advances in thermoelectrics by introducing glasslike substances into crystalline semiconductors to disrupt the regular structure and dampen vibrations along the crystalline lattice. Since a large part of heat moves via these vibrations, the dampening effect reduces thermal conductivity.

But a solid glass still propagates some heat through transverse, shear vibrations. A liquid does not.

“Our approach of using liquid-like ions instead of a solid glass is a new strategy to decrease thermal conductivity below that of a glass,” said Li. “It not only reduces the ‘mean free path’ of lattice vibrations — how far these vibrations can travel — but also eliminates some of the vibrational modes completely.”

The reduction in thermal conductivity results in a thermoelectric material with a “figure of merit” — a measure of its performance — that is among the highest for any bulk material, even at temperatures of 1,000 Kelvin (nearly 730 degrees Celsius). That’s a higher operating temperature than bismuth-tellurium based thermoelectric materials used in limited applications today. And unlike those materials, the new copper-selenium material contains no rare-earth elements.

“Over the past decade, there has been an increasing sense of urgency in the field of thermoelectrics, driven primarily by the demand for alternative energy and waste heat recovery,” said Li. “Thermoelectric generation systems convert heat into electric energy directly without producing carbon dioxide gas, radioactive substances, or other emissions. Improving the performance and use of these materials could therefore play an immensely important role in the worldwide effort to recover waste heat and develop alternative energy technologies to reduce our dependence on fossil fuels and reduce greenhouse gas emissions.”

This research was funded by DOE’s Office of Science, the U.S. Air Force Office of Scientific Research, and by the National Natural Science Foundation of China, Shanghai Science and Technology Commission, Program of Shanghai Subject Chief Scientist, and CAS/SAFEA International Partnership Program for Creative Research Team.

Additional coauthors on the paper include: Xun Shi, Lidong Chen, and Wenqing Zhang from Shanghai Institute of Ceramics; Ctirad Uher of the University of Michigan; and G. Jeffrey Snyder of the California Institute of Technology.