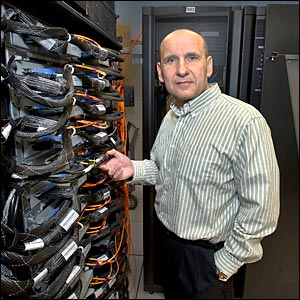 Roman Samulyak of Brookhaven Lab’s Computational Science Center with a BlueGene/Q — a next-generation IBM supercomputer that will be used to simulate scientific experiments at Brookhaven.

How is a scientist to search for clues and answers about the planet’s climate, nuclear fusion, and the physics of deep space? Many experiments that investigate those mysteries would be extremely difficult to measure, too expensive or dangerous to operate, or too far away to see. That’s when high-powered supercomputers with advanced mathematical models can come to the rescue. They simulate hidden processes, predict complex systems’ behavior, and guide future experimental design.

The Computational Science Center at Brookhaven Lab is home to several supercomputers that enable scientists to gain new insights through numerical experiments and simulations. There, scientists and mathematicians combine applied mathematics, computer science, and physics theory to develop sophisticated models, numerical algorithms, and supercomputer codes to simulate complex systems such as particle accelerators and energy sources.

On Wednesday, April 25, join Roman Samulyak of the Computational Science Center for the 477th Brookhaven Lecture, titled “Supercomputers and Mathematical Models for Multiphysics Simulations in Energy and Accelerator Sciences.” All are invited to attend this free talk, which is open to the public and will be held in Berkner Hall at 4 p.m. Refreshments will be offered before and after the lecture. Visitors to the Lab 16 and older must carry a photo ID while on site.

To join Samulyak for dinner at a restaurant off site following the talk, contact Laura-Li Loffredo, Ext. 3051, laurali@bnl.gov.

During his talk, Samulyak will discuss the goal of developing mathematical models accurate and reliable enough for simulated experiments to replace actual experiments. He will also explain how supercomputers and numerical tools are being used to investigate the nature of turbulence, design components for future muon colliders, evaluate new ideas for nuclear fusion, and more.

Samulyak earned a Ph.D. in applied mathematics through a joint New Jersey Institute of Technology-Rutgers University program in 1999. He arrived at the Computational Science Center at Brookhaven Lab as a postdoc in 1999 and was promoted to the role of scientist in 2005. In 2007, he also became an associate professor in the Department of Applied Mathematics and Statistics at Stony Brook University.