With the blare of an air horn and hammers clanging, on April 26 about 440 members of the Lab community — employees, visiting scientists, their families, retirees, contractors, and invited guests — crossed the starting line to walk the half-mile-round ring building that will house Brookhaven Lab’s next world-class facility: the National Synchrotron Light Source II (NSLS-II). 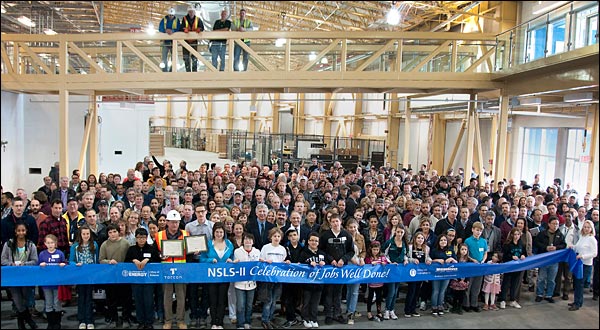 About 440 people — including employees, visiting scientists, family members, retirees, contractors, and invited guests — at the starting line to walk the half-mile-round ring building at NSLS-II.

The attendees gathered in the hangar-like hallway of NSLS-II to celebrate two major construction milestones — completion of the massive ring building in February and the commissioning of the light source’s linear accelerator, or LINAC, in March. The celebration coincided with Take Our Daughters and Sons to Work Day, so the children of employees and guests were able to join in the festivities.

Robin Ruotolo (at left, wearing vest) watched the crowd of people stream by on their half-mile walk around the NSLS-II ring building. She was one of 27 volunteers stationed around the ring to make sure the walk went smoothly and safely.

NSLS-II will provide sophisticated new tools that will allow scientists to see materials at the scale of a nanometer, or one billionth of a meter — a capability not available at any other light source in the world. Working at the nanoscale, researchers will focus on some of the nation’s most important scientific challenges, including developing novel materials for clean and affordable energy production, molecular electronics, and high-temperature superconductors.

“If the past is any indication of the future, this machine has decades of groundbreaking science ahead of it,” said Lab Director Sam Aronson, as he welcomed attendees to the milestone celebration.

Aronson expressed his appreciation for members of the Department of Energy, Brookhaven Lab, companies, and unions who were responsible for the NSLS-II’s reaching these milestones. He also invited the children in attendance to work toward becoming the next generation of scientists who could use the research capabilities at NSLS-II. 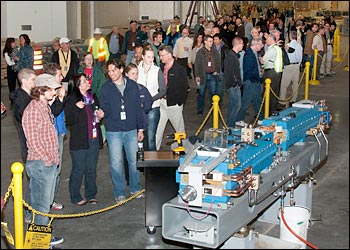 Walkers check out new equipment that will soon be installed at NSLS-II.

“This has really been a Lab effort. Everybody has pulled together and managed to accomplish this — we have a lot to be proud of,” Dierker said.

After restating the invitation to children in the audience to become future users at NSLS-II, Dierker added, “The x-rays at NSLS-II will be 10,000 times brighter than those produced at NSLS across the street, so the science that NSLS-II will support is going to be fantastic.”

Dierker then recognized representatives from two contracted companies for their companies’ efforts in reaching the milestones: Joe Klitsch of Torcon, Inc. for building the facility’s ring building, and Aron Metz of Research Instruments for building and installing the facility’s LINAC. The LINAC will generate and accelerate the electrons that then go on to a booster and storage ring to create the bright synchrotron light that researchers will use to probe the structure and function of everything from solar cells to cellular proteins.

NSLS-II construction, which began in 2009, is currently 70 percent complete, and the $912-million facility is on track to begin operations in 2015. The American Recovery and Reinvestment Act provided $150 million of NSLS-II’s total funding earlier than planned to accelerate conventional construction. During the course of construction and operation, NSLS-II is expected to create more than 1,250 construction jobs, most from local labor unions, as well as 450 scientific, engineering and support jobs.