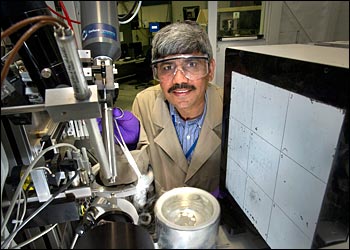 Structural biologist Subramaniam Eswaramoorthy stands at the NSLS x-ray beamline used to reveal the atomic structure of the bioremediation enzyme. The liquid nitrogen in the foreground keeps the crystallized enzyme cool, protecting it from the heat of the x-rays that would otherwise damage the crystal.

Some remarkable types of bacteria have proven themselves capable of “consuming” toxic pollutants, organically diminishing environmental impact in a process called bioremediation. Enzymes within these bacteria can effectively alter the molecular structure of dangerous chemicals, but the underlying mechanisms and keys to future advances often remain unknown.

Now, scientists at the U.S. Department of Energy’s Brookhaven National Laboratory have revealed a possible explanation for the superior function of one pollution-degrading enzyme. Using x-ray diffraction techniques at Brookhaven’s National Synchrotron Light Source (NSLS), they probed the structure of an enzyme engineered at Stanford University that had been identified as particularly effective in dealing with a carcinogenic pollutant known as hexavalent chromate. They discovered that this mutated enzyme might owe its high performance to its unique structure of intermolecular bonds. The research, published recently in the journal PLoS ONE, offers insights into the future engineering of bacteria for pollutant bioremediation.

“The enzyme’s structure surprised us,” said Brookhaven structural biologist Subramaniam Eswaramoorthy, lead author on the paper along with Sebastien Poulain of Stanford University. “Typically, you expect an enzyme’s so-called active site, which interacts directly with hexavalent chromate, to determine reaction levels. But we found that the unique intermolecular hydrogen bonds within this mutant enzyme, called ChrR, are what most likely make it such a strong performer.” 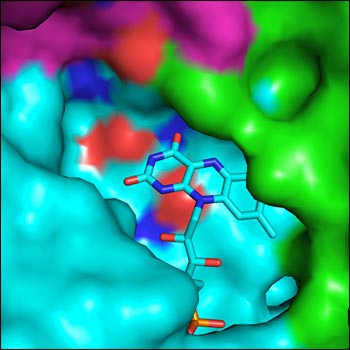 The active site of the mutant ChrR enzyme, identified as particularly effective in the bioremediation of carcinogenic pollutants, can be seen here as a stick-model within the larger protein structure. The increased volume of the cavity may make the entry and subsequent alteration of toxic chromate easier than in the “wild” enzyme.

Hexavalent chromate, also known as Chromate VI, is a human carcinogenic pollutant that occurs frequently as a byproduct of industrial processes. Its ability to contaminate other substances, such as water supplies, raises environmental concerns. An appropriate enzyme, however, can neutralize and effectively inhibit toxicity by stripping the compound of its electrons. While a few enzymes can perform this function, most fall into a vicious and unproductive cycle.

“Most enzymes pull only one electron from Chromate VI, turning it into a Chromate V intermediate,” Eswaramoorthy said. “But then that second compound pulls an electron from other reactions and transforms itself right back into Chromate VI. At that point the initial reaction begins again, and this toxic pollutant just bounces back and forth between the two forms. This is not a solution.”

The new mutant enzyme that is the subject of the current study, which was isolated from the bacteria Esxcherichia coli, acts differently: It uniquely converts Chromate VI into benign Chromate III in just one reaction, leapfrogging the intermediate Chromate V. The mechanism is still not entirely understood, but could be a simultaneous two-electron transfer. That action’s demonstrated efficacy in bioremediation motivated the investigation into the bacterial enzyme’s atomic structure.

Scientists recorded the patterns produced as intense x-rays from NSLS bounced off the atoms in a sample of crystallized ChrR, a process known as diffraction. This revealed details at the single angstrom level, spanning distances of just one or two atoms. The protein structure deduced from these diffraction images showed that the enzyme ChrR is a tetramer, or a biological unit formed by four distinct protein molecules binding together. 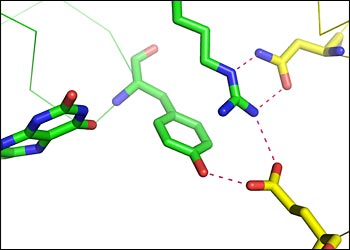 This model of the highly effective form of the bioremediation enzyme ChrR shows the intermolecular interactions and unique multi-atom hydrogen bonds (dotted lines) that may be the key to understanding the enzyme's efficacy in reducing the toxicity of some dangerous pollutants.

Critically, this promising enzyme features unexpected intermolecular interactions. In the unmutated or “wild” enzyme, three protein bonds are supported by a single atom; but in the mutant just tested, these bonds are distributed across several atoms. That multi-atom reinforcement grants greater stability to the enzyme – consider the difference between a camera balanced on a tripod and another perched precariously on a single pole. The distinct structure may also offer a larger space for toxic pollutants to enter the protein active site and allow bioremediation reactions to occur.

“We’re talking about building a better, more stable machine,” Eswaramoorthy said. “When substrates such as Chromate VI come and go, this strongly bonded enzyme does the job more effectively. We believe that the three-bond structure makes the difference.”

Bioremediation of dangerous pollutants such as hexavalent chromate remains experimental, but the new research helps push this kind of bacterial enzyme closer to real-world neutralization of such carcinogens. The team also noted that this enzyme has potential uses in some kinds of cancer treatment, for example, by fine-tuning the activation of drugs in targeted chemotherapy.

Scientists in Stanford University’s Department of Microbiology and Immunology plan to continue to test the efficacy of various forms of the enzyme for use in bioremediation. Brookhaven scientists will then probe the atomic structures, looking for correlations between form and function.

Additional collaborators on this research include scientists from the French Alternative Energies and Atomic Energy Commission (CEA), Aix-Marseille University in France, and RTI International.

This work was supported by a Marie Curie International Outgoing Fellowship from the European Commission and an award from the Defense Threat Reduction Agency through a contract with Brookhaven Lab. The National Synchrotron Light Source and other Brookhaven user facilities are supported by the DOE Office of Science.