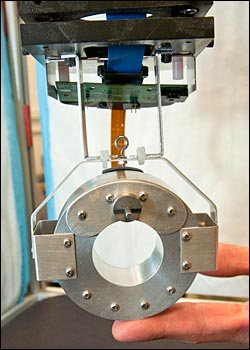 This small-scale PET scanner will advance research on conditions such as cancer, Alzheimer’s, and Parkinson’s disease.

Scientists sometimes find the road from scientific discovery to technology deployment to be long and hard, with unexpected challenges arising along the path. A most important early step in this journey is preparing a BNL technology to be attractive to partners in the commercial marketplace. The BNL Technology Maturation Program is an important part of the strategy to accomplish the Lab’s technology transfer mission, by supporting promising scientific discoveries through this process. Since 2008, the maturation program has provided BNL researchers with seed money for additional R&D of early stage technologies. The goal of the program is to move promising research discoveries from the laboratory stage through a real world “proof of concept” stage and to a degree of development sufficient to create partner interest toward successful deployment.

After receiving funding assistance from the Technology Maturation Program, Paul Vaska and David Schlyer of the Medical Department and Craig Woody of the Physics department have had three positron emission tomography (PET) technologies — RatCAP, a breast imaging system and a wrist scanner — optioned to private companies who hope to eventually commercialize them. Aurora Imaging Technology, Inc. based in Boston, MA and SynchroPET, a start-up based in Shoreham, NY, are now working with Vaska, Schlyer and Woody to help make the devices useful for a variety of medical treatments.

The first of these is the RatCAP, a new small-scale, portable brain-imaging device, which allows for a dynamic range of new applications, including integration with magnetic resonance imaging (MRI) and compact scanners that can be “worn” by fully conscious, active rats. These new ways to “see” inside the body offer the promise of a deeper understanding of the brain and the diseases that affect it and other organs. A first prototype of the RatCAP has been built and has demonstrated impressive performance as a PET scanner. Furthermore, it has demonstrated that it can provide complementary data on behavior and neurochemistry that were never before possible, opening up exciting new possibilities in neuroscience. The RatCAP technology was funded in 2011 through the BNL Technology Maturation Program.

Schlyer said the commercial potential of the device is “significant,” based on the large response to a recent publication in Nature Methods, by the scientific and lay press, and multiple inquiries by prospective users.

Paul Vaska commented, “Although biomedical device companies have also shown interest, we believe that they have not yet committed because our system has not been available to other researchers who could corroborate our results and help demonstrate its full potential. But a major stumbling block to the dissemination of the system is that although it works in the hands of its designers, two key elements must be improved before other labs can use the device – the data acquisition module which is outdated and unreliable, and data processing software which is not user friendly, inhibiting routine use.” These problems may be solved with continued funding for development.

The second technology to be advanced through this program is the breast imaging system. This device allows PET and MRI imaging of the breast to be done simultaneously. Schlyer said “We believe that this combination of imaging information will significantly enhance the diagnostic capabilities for the detection of small breast cancer lesions and in the future may allow us to significantly reduce the number of unnecessary biopsies. MRI is very sensitive but not very specific while PET is much more specific, but not as sensitive as the MRI. The combination allows the best of both worlds.” This technology is being advanced in cooperation with Aurora Imaging Technologies who produces the commercial dedicated MRI breast imaging system into which the BNL PET insert can be placed.

The third project is the wrist scanner which was first funded in 2010, and funding was renewed last year. Schlyer explained that each PET study for the detection of cancer or other diseases is rich with kinetic data most of which is lost in the typical clinical or non-invasive PET study where radioactivity concentration is measured in an organ of interest. “In our proposal, we will develop a small tomograph allowing simple generation of an accurate input function for PET radiotracers,” he said. “Preliminary studies in our laboratory have shown that this approach and design are quite feasible. Upon completion of our development of this scanner, we will generate an arterial input function that greatly reduces biohazards associated with arterial blood withdrawal as well as the discomfort associated with arterial cannulation. If successful, this will move us closer to being able to do quantitative PET tracer studies in clinical research and diagnosis with reduced risk and discomfort to the patient and medical personnel who carry out the PET scans.

“It will also move us closer to being able to translate new radiotracers to the clinical setting where they can be applied to addressing important medical problems and to facilitate the development and application of new drugs and other therapies,” Schlyer said. “A significant part of this is moving the device from a prototype, which requires considerable expertise to operate, to a device which can be used easily in the clinic. The Technical Maturation Funding has helped in this effort and has made the device attractive enough to an outside company that they are considering funding the further development of this device into a commercial device. Thus the key goal of this proposal is to upgrade these two facets of the system, enabling researchers from the broader academic and biotech areas to see for themselves the value of our technology.”

The deadline for submissions of this year’s proposals for Technology Maturation funding is June 18. Projects should be designed to achieve specified results and milestones toward a successful outcome. Office of Technology Commercialization and Partnerships (OTCP) advises that cross-functional collaboration is extremely helpful, and strongly recommends that teams consult with OTCP staff in the preparation of proposals.

Preliminary selection notification will be on June 22. Each proposal selected as a finalist will make a brief presentation to the selection committee on its proposal and the potential for impact. These presentations are scheduled for June 29. Final award notification will take place on July 3. The applications and more details of the recently issued 2012 technology maturation call can be found at http://www.bnl.gov/techtransfer/tmfp/.

Since the BNL Technology Maturation program began, 21 technology maturation proposals have been funded, resulting in many significant advances of the inventions to deployment. In addition to RatCAP, the breast imaging system and the wrist scanner, the platinum core-shell monolayer electrocatalyst technology was significantly advanced through maturation funding, resulting in a practical production process to make the materials in volume. This technology was licensed to N.E. Chemcat Corporation, a joint venture of BASF Group and Sumitomo Metal Mining Co., based in Japan. Products made under this license are already being supplied for fuel cell production in vehicle applications. Technology maturation funding also supported the technology development work for the superconducting magnetic energy storage (SMES) project, which now has received continued funding provided by the Advanced Research Projects Agency-Energy (ARPA-E) in a major collaborative project with ABB, Inc. of Cary, NC and SuperPower, Inc. of Schenectady NY.