On May 25th, Brookhaven National Laboratory hosted a delegation of Vietnamese scientists and diplomats seeking to learn about BNL’s laboratory operations, technology transfer programs and to explore potential future scientific collaborations. The group, on its second visit to Brookhaven, represented the Vietnam Academy of Science and Technology (VAST). The delegation included VAST Vice President Duong Ngoc Hai and Phan Tien Dung, Vice Director of VAST’s Department of Application and Department of Technology. 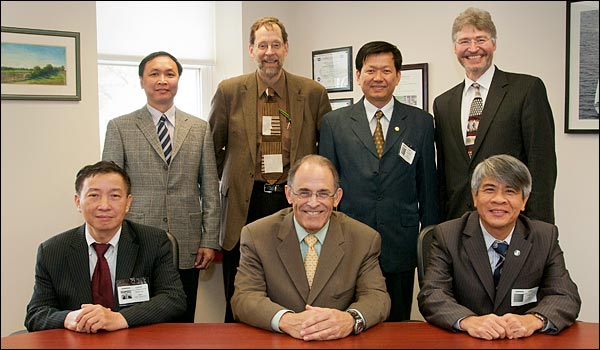 The group toured RHIC, NSLS and CFN, and participated in discussions of lab operations, research collaborations and technology deployment, and of managing light sources and other user facilities. They were also given a brief tour of NSLS-II to discuss potential future work there. The Vietnamese scientists are keenly interested in agricultural technologies and were particularly intrigued by Brookhaven’s plant research, which could provide pathways to improve crop yields and also present opportunities for biofuel production.

VAST recently received a global grant from the World Bank to support development of technology transfer efforts and to advance the Academy’s research operations through adoption of best practices of other organizations in the United States and around the world. The goal is to improve the productivity of research in Vietnam and to build partnerships with other scientific institutions.