The Frontiers of RHIC Physics

With a record-breaking run winding down, upgrade plans that could propel research for at least 10 years of groundbreaking discoveries, and uncertain budgets looming ahead, there was much to talk about at the 2012 annual Relativistic Heavy Ion Collider (RHIC) and Alternating Gradient Synchrotron (AGS) Users’ Meeting held at Brookhaven Lab June 12 to 15. During the meeting, two hundred people — some of the brightest scientists in the world exploring the frontiers of physics — discussed heavy ion and spin physics, machine and detector upgrades, plans for existing experiments, and machine and detector options for a possible future electron-ion collider — eRHIC. 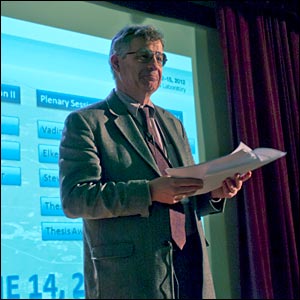 “We’re gathering near the end of what has really been a magnificent run, during which we met or exceeded all of the science goals that we set out at the start,” said Associate Laboratory Director for Nuclear and Particle Physics Steve Vigdor, as he welcomed attendees to the opening plenary session.

Vigdor’s welcome was followed by reports from Run 12 Coordinator Vincent Schoefer, Renee Fatemi of the STAR collaboration, John Koster of the PHENIX collaboration, and Leslie Bland of the AnDY collaboration — a program proposed at RHIC to measure the spin sensitivity of a process producing pairs of electrons and their anti-particles, which are called positrons.

Run 12 began in mid-January this year as physicists started cooling RHIC’s superconducting magnets to temperatures near absolute zero (-273 degrees Celsius) for first collisions on January 21. Collisions during the run, which was scheduled to conclude on June 27, included polarized protons at beam energies of 100 and 255 GeV, followed by uranium beams at 96 GeV per nucleon, copper and gold beams at 100 GeV per nucleon, and a short test run with gold beams at 2.5 GeV per nucleon. The uranium-uranium collisions and asymmetric copper-gold collisions represented worldwide firsts.

This run included the first time that colliding ions were served up by the Electron Beam Ion Source (EBIS), a new, more versatile pre-injector that produces ion beams of species previously unattainable, like uranium. Scientists also demonstrated the power of stochastic cooling to increase luminosity at RHIC by “cooling” particles within heavy ion beam bunches, to counteract their natural tendency to spread out, or warm up, in momentum over time. These critical upgrades and others, which were several years in the making, were completed about five years faster and at one-seventh the cost envisioned in the 2007 Long Range Plan for U.S. Nuclear Science, because of advanced research and development on new accelerator technologies at RHIC.

With the actual cost for power to operate RHIC lower than expected, funds were freed up to extend the run by three weeks, providing the resources needed for the copper-gold and uranium-uranium collisions — all with a record-setting 85 percent uptime for operations at RHIC.

Physicist Vadim Ptitsyn of the Collider-Accelerator Department detailed the progress of current research and development for the proposed eRHIC upgrade, which would allow Brookhaven to collide high-current electron beams with protons or heavy ions to probe the mysterious behavior of gluons. The construction of an electron-ion collider (EIC) remains one of the most promising proposals for the future of nuclear physics.

“The physics underlying the mechanics and potential of this new collider are well understood, and we haven’t hit any show-stoppers,” Ptitsyn said. “The next three or four years will be critical for completing essential research so that we can mount a full eRHIC design.”

Physicist Elke-Caroline Aschenauer, a leader of Brookhaven’s Electron-Ion Collider task force, discussed the groundbreaking physics exploration possible at an electron-ion collider. She made cases for breakthrough understanding in multiple research areas: spin physics, including determining the contributions of quarks and gluons to total proton spin; imaging the spatial distribution of quarks and gluons within a proton, and determining how they move transverse to the proton direction, to extract clues to their orbital angular momentum; and probing Color Glass Condensate, the high-density gluon “walls” that emerge as the dominant feature in ions traveling at relativistic speeds. 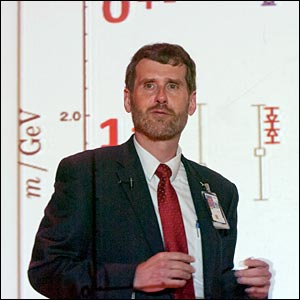 James Sowinski, the Acting Program Manager of Heavy-Ion Research in the Office of Nuclear Physics for the Department of Energy’s Office of Science

“The best advice we can give you is to continue doing the best physics you can and make sure the public hears about it — not just at DOE. People in the country need to get excited about science,” Sowinski advised. “Develop the best ideas — and I see that you are. They’re the best ammunition, and our ammunition as well.” 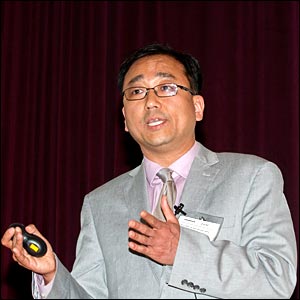 Kyungseon Joo, program director for the National Science Foundation (NSF), then gave an overview of the NSF’s support for nuclear physics. Joo noted that for FY2012, the NSF’s appropriation for research and research-related activities are up 2.8 percent while overall funding for nuclear physics programs is nearly $20.9 million, down 3.5 percent from FY2011. The NSF also continues to manage funding impacts that arise from the one-time “bump” provided by the American Recovery and Reinvestment Act in FY2009.

Hallman discussed the portfolio of experiments for U.S. Nuclear Physics, as well as the Long Range Plan for Nuclear Physics of 2007, The Frontiers of Nuclear Science, which outlined what a committee made up of the top members in the nuclear physics community felt should be addressed next in the succeeding five to 10 years. 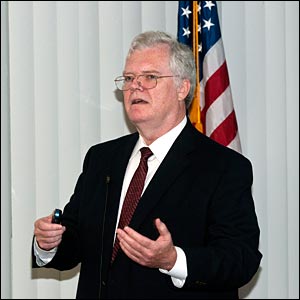 Timothy Hallman, the Associate Director of Science for Nuclear Physics in the Department of Energy’s Office of Science, provides his perspective on the future of nuclear physics in the United States.

As Hallman gave his personal perspective during the talk, he said, “Given the outlook for the country, budgets will be constrained and so it will be even more important to select experiments of the highest impact. It won’t be, perhaps, good enough just to be a good experiment that’s going to get a solid result. You may need a great experiment that’s really going to re-write the textbooks.”

Re-examining Long Term Plans for Nuclear Physics in the U.S.

As Hallman explained, and a number of speakers referenced during the meeting, future federal budgets are uncertain and competition for federal dollars fierce, so the Department of Energy and the National Science Foundation have charged the DOE/NSF Nuclear Science Advisory Committee (NSAC) to re-examine the 2007 Long Range Plan for Nuclear Physics. Robert Tribble of Texas A&M University will chair a new NSAC subcommittee charged with providing advice to implement priorities and recommendations in the 2007 plan in light of projected budget constraints.

Some of the major projects included in the plan that the committee will consider are a 12GeV upgrade to the Continuous Electron Beam Accelerator Facility (CEBAF) at Jefferson National Laboratory; the Facility for Rare Isotope Beams, a new national user facility planned to be built at Michigan State University; and an electron ion collider — possibly eRHIC, which could be built at Brookhaven.

The NSAC subcommittee is made up of 22 members from universities and national laboratories, including PHENIX Spokesperson Barbara Jacak from Stony Brook University. Before reporting in January 2013, the subcommittee members will work to determine recommendations to optimize the overall nuclear science program from fiscal year (FY) 2014 to FY2018 under two possible budget scenarios: flat funding at the FY2013 level, or modest increases during the next five years.

Steve Vigdor’s Perspective on the Future at RHIC

On the last day of the Users’ Meeting, during a talk that will likely be his last Users’ Meeting presentation as ALD for Nuclear and Particle Physics at Brookhaven Lab before his retirement, Steve Vigdor provided his perspective on the outlook for RHIC Physics. He began by addressing 10 big questions that physicists wanted to answer with data from RHIC before collisions began in 2000. With six answers to those 10 questions being “maybe” — not because the answers are completely unknown, but because results from measurements made are still open to interpretation — Vigdor said that scientists collaborating in experiments at RHIC and the Large Hadron Collider at CERN in Switzerland now need to design measurements to address more quantitative questions that follow up on the definitive answers achieved to date and help to resolve the remaining “maybes.”

“At RHIC, there is a clear decade-long measurement program, exploiting RHIC’s versatility and new capabilities, to address critical questions that have been raised, or not yet resolved,” Vigdor said. “RHIC and the LHC are complementary facilities that are both needed to resolve many of the outstanding open questions.”

During the meeting, Vigdor also named two Ph.D. students — John Koster and Len K. Eun — to recognize their outstanding research conducted at Brookhaven’s accelerator facilities. Each honoree received a certificate and a check for $3,000, and presented their findings at the users’ meeting. 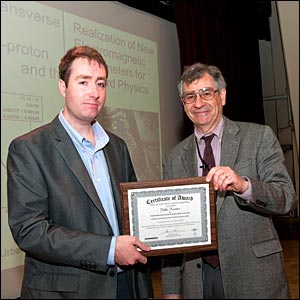 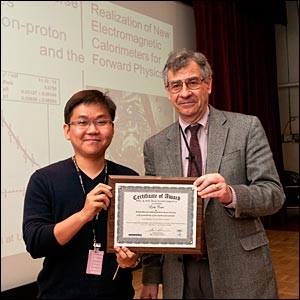 Koster, now of Brookhaven’s Physics Department and formerly of the University of Illinois at Urbana-Champaign, was recognized for his work on spin asymmetries in polarized proton-proton collisions, and for new electromagnetic calorimeters designed for collider detectors. Eun, now of Lawrence Berkeley National Laboratory and formerly of Penn State University, was recognized for complementary work also on spin asymmetries, including improved analysis techniques on forward mesons. Both thesis honorees performed their research at RHIC.