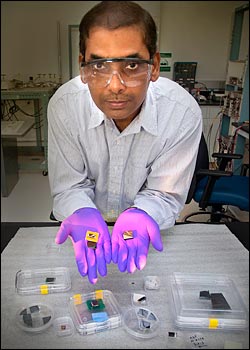 Anwar Hossain in the laboratory

Assistant Scientist Anwar Hossain began his professional career in his native Bangladesh as a scientific officer for the Bangladesh Atomic Energy Commission, where his expertise was in radiation protection and health physics. Holding degrees in nuclear physics from the University of Rajshahi in Bangladesh, he used his expertise to conduct research in radiation protection and shielding design, and on enforcing the Nuclear Safety and Radiation Control laws to ensure the safety of workers, the public, and environment from exposure to ionizing radiation. He also served as an expert in radiology, radiotherapy, and nuclear medicine, non-destructive testing and well-logging facilities/companies.

For his scientific and technical accomplishments in this field, he was awarded a Fellowship of the International Atomic Energy Agency. Hossain has gained familiarity with techniques for assuring nuclear radiation protection and detection in many renowned research laboratories, such as the Australian Nuclear Science and Technology Organization, the Australian Radiation Laboratory, the Japan Atomic Energy Research Institute, and the Malaysian Institute of Nuclear Technology.

Over time, Hossain said he has become aware of the importance of radiation detection devices, and of their shortcomings; as his interest grew, he decided to undertake comprehensive higher studies in the field. Hossain earned his doctorate at the University of Surrey, UK after being awarded a scholarship from the Government of Bangladesh. His research focused on developing high-resolution room temperature semiconductor x- and gamma-ray detectors. Beginning with his doctoral studies, Hossain has made many notable contributions to this field. A major advance in his research was in revealing the distribution pattern of the internal electric field for the first time in cadmium zinc telluride (CdZnTe) devices.

While working at the Bangladesh Atomic Agency Commission as Principal Scientific Officer in 2007, he was offered a position at Brookhaven. He decided to come to BNL to further his research and gain new experiences and opportunities for himself and his family. He joined Brookhaven as a Research Associate in the Detector Development R&D Group in the Nonproliferation and National Security Department.

“I am deeply fortunate and pleased to be part of one of the world’s leading research teams in the room-temperature radiation detector field,” said Hossain.

Hossain spends his days in one of several laboratories, including the NSLS and CFN, pursuing research on material characterization, device fabrication and testing, and employing a variety of state-of-the-art techniques aimed at developing high-performance radiation detectors that operate at ambient temperature. Such instruments are vital to the field of nonproliferation and national security, medical imaging and high-energy research applications.

“The key to developing a better device is linked inextricably to producing better materials. However, surface morphology and interfacial defects make a difference that we also must take into account,” he said.

Hossain has made noteworthy efforts in several aspects of detector development and characterization; currently, he leads the crystal processing and device fabrication laboratory at BNL. He was co-winner of the 2009 R&D 100 Award for developing a compact gamma camera for imaging prostate cancer; this device has been granted FDA clearance for manufacturing and sales. He continues to offer simple approaches to resolving the many challenges facing the fabrication of such detection devices and is one the leading researchers to successfully bridge the gap between nanotechnology and room temperature semiconductor radiation detectors to analyze crystal contaminants and nano-structural defects and their influence on the detector’s performance.

“We correlate the nature and extent of a crystal’s defects with the performance of the device we fabricate from it, then we explore how to resolve those problems, in order to grow better crystals, and ultimately superior devices. And we are on the right track to reach our objective,” said Hossain.

Hossain lives on Long Island with his wife, one son and two daughters. “I enjoy my leisure time with my family and my kids, socializing with community families, and playing tennis and badminton,” he said. He is also involved in charity work in his neighborhood within his home country, where many people still are deprived of basic needs.

“When you earn and spend a single dollar here in America, it’s a dollar for you but it’s carries a huge worth and meaning for me,” said Hossain. “A dollar can provide food for a day for a family of four; ensure that a poor neighbor has an essential household item, or provide life-saving medicine for a sick person.”

Hossain said, “I love to spend most of my time in the laboratory and hope to do so in future. I personally follow the ‘Extra Minute Rule’ where I take an extra minute before leaving the office/lab to check that all things are left in a safe condition, even after following all of the normal safety rules, and I encourage colleagues to do the same. I have enjoyed my time at BNL from the very first day I came here. We have an excellent research environment - people are very friendly, we have great facilities and supporting divisions. This is the perfect place to work, and I always try to give 110 percent of my effort.”