Scientists from the U.S. Department of Energy's (DOE) Brookhaven National Laboratory continue to play key roles in the development of advanced superconducting magnets for future colliders. In order to create a proposed muon collider, which will explore fundamental physics puzzles, extremely high-field magnets must be developed. Brookhaven Lab is a world leader in advancing this tricky technology, having already set a 16 Tesla peak field record for high-temperature superconducting (HTS) magnets.

Next Generation of Superconducting Magnets 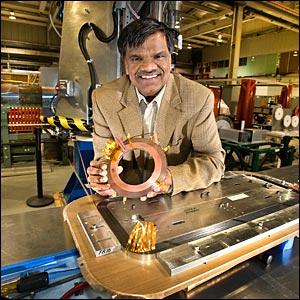 One of the best-known technological advances to come out of the Tevatron program was the development of superconducting magnets using niobium titanium wire. Their manufacture later spurred widespread production of the technology for use outside particle physics, for example in magnetic resonance imaging machines.

Now researchers are working to make another leap in technology using a new class of magnets based on high-temperature superconductors. HTS magnets could enable magnetic fields with twice the strength of their more conventional niobium-based counterparts. The extraordinarily high fields of which they are capable — 30 to 40 Tesla or more — are crucial for focusing the particle beam for another collider, the proposed muon collider.

Last month, scientists and members of industry gathered to review the status of high-field magnet development for the muon collider at a workshop hosted by the U.S. Muon Accelerator Program.

"The high-energy physics community has historically been the most consistent driver of superconducting wire," said National High Magnetic Field Laboratory scientist David Larbalestier. "Everyone has benefited from that. MAP is now providing a driver for high-energy physics.

Though HTS magnets can operate in far higher fields than can conventional superconductors, they are also made of complex, brittle materials. The challenge is to make one that can survive the high fields and forces without destroying itself.

"If some little spot on the magnet stops being superconducting, it could get hotter and hotter until it breaks off, melts off or does something horrible," said Brookhaven National Laboratory's Bob Palmer. Detecting a quench, or the loss of superconductivity, in this type of conductor is challenging.

"A key element of the MAP R&D program will be to develop the necessary quench protection techniques to ensure that we can safely and reliably operate HTS-based magnets in an accelerator environment," said MAP Director Mark Palmer.

MAP researchers are investigating two high-temperature superconductor materials. The first, called ReBCO, is a high-strength conductor available in tape form, which can be used for winding high-field focusing solenoid coils. The second material, BSCCO, can be fabricated into multi-filament, isotropic round wire, which is readily formed into cables suitable for use in a wide range of magnet designs. Both conductors have an important role to play in high-field magnet development.

In the current muon collider design, the focusing magnet would be composed of several superconductors using an inner HTS coil and outer conventional niobium-based coil.

Designing high-field magnets for the muon collider's physics program is new territory, but the essential problem is not. Others have coped with potentially stress-inducing amounts of energies for magnets with different requirements. Both Larbalestier's group at NHMFL and a group at Brookhaven National Laboratory, led by scientist Ramesh Gupta, have built magnets that set world records for magnetic field strength. They are optimistic about the muon collider's magnetic prospects.

"If we can make this magnet, it would be a major breakthrough in technology," Gupta said. "It would even be useful beyond accelerator science."