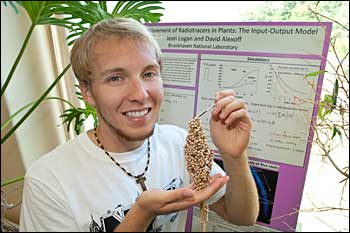 Paul Kline spent all of his Christmas break working on his Department of Energy internship application. Just two months later, he found out that he had been accepted to Brookhaven National Lab.

Kline, who studies computer science at Blackburn College, was tasked with writing software in C++ for chemist Jean Logan in the Medical Department. There was only one problem: he didn’t know C++.

“I went right to the research library and got about five or six books,” he said. “Jean actually wanted me to teach her!”

Their project is part of the Department of Energy’s growing focus on plant life. A better understanding of plant physiology can help scientists grow crops for biofuels more efficiently and sustainably in the future.

Currently, Logan is studying how long it takes for photosynthate, a chemical product of photosynthesis, to travel from a plant’s leaves to its roots. She labels the photosynthate with a radioactive tracer by exposing the plant to carbon dioxide gas made with the radioisotope carbon-11. Using microscopic positron emission tomography (microPET), scientists monitor the movement of the tracer over several hours.

The team analyzes the tracer’s progress through the plant using an input-output model, a technique that represents the relationships between the components of a relatively unknown system. That’s where Kline comes in. Logan needs him to write code that can remove conflicting noise from the data and display it in the input-output model.

“In scientific measurements, you always have noise,” Logan explained. “Part of this model involves methods for estimating the parameters and the presence of the noise. If you just use the initial linear solution, it will be biased in both the input and the output.”

Kline’s code will also be used to develop a formula that explains the tracer’s movement.

Logan noted that Kline isn’t intimidated by the challenge. “He’s very smart. I really like computer science students, because they can come in and just get things done,” she said.

Kline says he enjoys living and working at Brookhaven. He tells his friends at home about the interns’ free housing, and gets his cross-country fix through the lab’s Running and Cycling Club.

“Nobel Prizes are given here, research is done here, and I’m right here in the middle of all this,” Kline said. “It feels cool to be able to say, ‘I’ve been there.’”