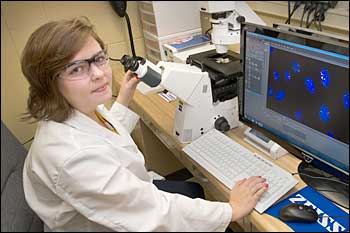 SUNY Geneseo junior Sarah Ackerman didn’t have to look far for something to do this summer vacation.

A resident of nearby Stony Brook, she was already very familiar with the internship program at Brookhaven National Laboratory. Her father, Andrew, works at the National Synchotron Light Source (NSLS).

“I’ve visited Brookhaven lots of times, and I realized [the program] would be a good thing to apply to,” she said.

Ackerman is interning under Deborah Keszenman, a beamline scientist for NASA’s Space Radiation Laboratory (NSRL). Keszenman studies the effects of different types of radiation on cells in order to understand how to protect astronauts from radiation in space. Cosmic radiation can cause genetic mutations, cancer, and premature aging.

Keszenman is currently investigating cells with defective mitochondria. Mitochrondria are mainly responsible for producing energy in the cell, but they also produce free radicals—atoms with unpaired electrons. When combined with ionizing radiation, free radicals can seriously damage the cell’s DNA.

Cells with defective mitochondria have lower energy and fewer chemically reactive molecules containing oxygen. Keszenmen thinks the defects may lead to one hidden benefit. “Cells defective in mitochondrial function might be more resistant to ionizing radiation,” she said.

For the last six months, Keszenman has been working with connective tissue cells called fibroblasts in an effort to isolate the cells with mitochondrial defects. Ackerman’s task is to characterize the experimental cells to confirm that they are defective. Once she’s done that, they will test just how sensitive those cells are to ionizing radiation.

“This issue with astronauts is that they will be exposed to constant ionizing radiation as they travel to Mars, which takes three years one way,” Ackerman explained. “So, it is important to understand everything about cells’ reaction to low dose radiation to keep them protected and understand the risks.”

Ackerman appreciates her mentor’s patience as she learns a host of new laboratory techniques. She hopes that her time at Brookhaven will help her in college, where she assists a professor in his genetics research.

“Deborah is very helpful. She lets us have freedom, but she also shows us what to do,” Ackerman said. “My experiences here will be really good practice for when I go back to school in the fall.”