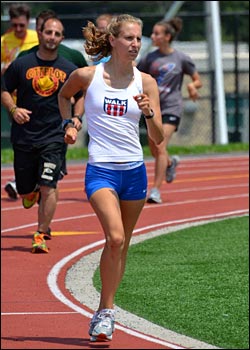 This summer, Brookhaven National Laboratory will see one of its own compete in the Olympic Games. Maria Michta, daughter of National Synchrotron Light Source (NSLS) scientist Richard Michta, will head to London next month for the 20,000-meter racewalk.

Michta, who qualified in the U.S.A. Olympic Trials in Oregon on July 1, says this is a dream come true.

“I was ranked number one [before the trials], but rankings are only sheet-deep. Plus, I’d had a severe injury in April,” Michta says. “I knew that I was either going to fall over in the middle of the race trying and pass out, or cross the line and make the team. Luckily, I crossed the line first.”

Michta started racewalking as a freshman at Sachem High School to stay in shape during soccer’s off-season. She qualified for the national high school competition in her very first year of training.

She continued racewalking independently as a biology student at C.W. Post, where she graduated valedictorian of her class one semester early. She spent the nine months between graduation and graduate school at Brookhaven, interning under Vivian Stojanoff at NSLS.

They studied what Michta affectionally calls “sunscreen for crystals”—how to prevent radiation damage to crystals of lysozyme, a protein found in egg white that helps protect from infections.

“Maria has the same dedication for her sport that she does for science,” said Stojanoff. “In order to do anything, you need to focus to really excel. She is an example of that: motivated, focused, and dedicated.”

While working at Brookhaven, Michta was still competing, first training under Smithtown’s Gary Westerfield and then under former Olympian Tim Seaman. In 2006, she placed fifth in the U.S.A. 20K Nationals. By 2010, she had reached first place, retaining her crown in 2011, and then again this year.

Michta is currently taking a six-month leave of absence from Mount Sinai Medical School, where she is pursuing a doctorate in microbiology, to focus on her Olympic training. She says she has two goals for the games: to reach the Olympic A standard for racewalking by finishing in under 1:33:30, and to place in the top 50 percent in her competition.

“I've never stopped believing that I have what it takes, that my desire and dedication will prevail and allow me to achieve my dream,” Michta says.

When the games are over, Michta will return to Mount Sinai to finish her degree. In the future, she would like to continue living on Long Island and doing science research.

“I would love to come back to Brookhaven!” she says. “That would be a dream job. If they had an opening here for me, I would sign up right now.”

Michta’s event will take place on August 11 at noon EST. Read more about her journey to the Olympics.