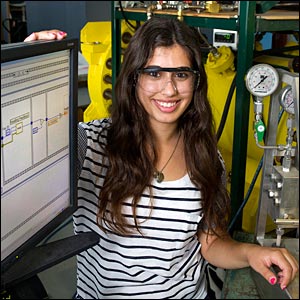 Marneris first came to Brookhaven National Laboratory (BNL) as a summer intern working for Charles Theisen in the Collider-Accelerator Department (C-AD). She used LabView, a visual programming language, to streamline the user interface of existing C-AD software. During her final poster presentation, Marneris met research engineer Rahul Sharma, who was intrigued by her work.

“We had been teaching LabView to another intern, but he had to return to school,” Sharma explains. “Athena seemed to have a good hold on the program and, after talking to her, I had the feeling she could handle a problem we were trying to solve.”

Sharma recruited Marneris to begin a new internship working with him and Milind Diwan on the Long Baseline Neutrino Experiment (LBNE). LBNE is an international high-energy physics project exploring neutrinos, the small subatomic particles that famously change “flavors” as they travel to Earth from the Sun. Despite a long and celebrated history of investigation—including Nobel Prize-winning research by Brookhaven physicist Ray Davis—neutrinos still hold many mysteries for scientists. LBNE’s goal is to learn more about these unusual particles and the role they played in the evolution of the universe.

In order to do this, LBNE plans to shoot neutrinos over an 800-mile distance underground from the Fermi National Accelerator Laboratory in Illinois to a mineshaft in South Dakota, where Davis conducted his seminal work. Brookhaven scientists are now designing a device that can detect and record the neutrinos as they arrive. 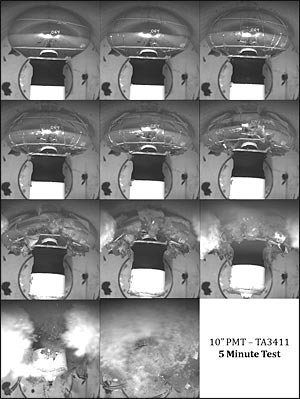 When Marneris joined the research team, they were considering using a water Cherenkov detector—a large water tank with lightbulb-like structures called photomultiplier tubes (PMTs) lining its inside walls. As neutrinos entered the detector, they would knock into water molecules, emitting a photon of light that could then be picked up by the PMTs.

Sharma gave Marneris the task of studying PMTs in greater detail. In 2001, a similar neutrino detector in Japan ran into trouble when a single defective PMT imploded, causing a shock wave that cracked thousands of tubes nearby. LBNE scientists wanted to better understand how PMTs respond to pressure in order to prevent this kind of accident from happening with their machine.

Marneris returned to Brookhaven twice a week throughout her school year at Stony Brook University, where she studies electrical engineering and applied mathematics, to work on a computer model of the PMTs.

“The tanks had a video camera to track the photomultiplier tubes, and we would plot the pressure every second,” Marneris says. “I developed the program to test how the tubes reacted under varying pressures over time.” By subjecting different-sized PMTs to slowly rising pressure over different lengths of time, Marneris and Sharma found that PMTs were more likely to implode at lower pressures when the pressure rose at a slower rate.

Experiments with PMTs are now coming to an end. LBNE scientists are exploring a new, smaller detector design that instead uses liquid argon and an interlocking array of anodes and cathodes, which should prove less expensive than the water Cherenkov detector. However, Marneris says she’d be happy to stay on at Brookhaven if there’s more need for her help.

“I liked LabView and the programming aspect of my internship, and everyone was very accommodating with my school schedule,” she says. “It was just fun!”