By John Millener of the Physics Department, with contributions from Peter Bond, Chellis Chasman, and Keith Jones 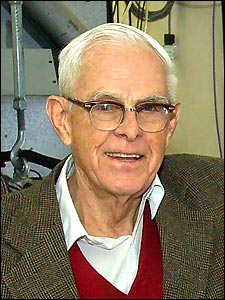 David Alburger, a retired senior physicist who held a guest appointment in the Physics Department, died on June 13, 2012. He was 91. Alburger, who graduated from Swarthmore College in 1942 and worked for Naval Research during the Second World War, received his Ph.D. in physics from Yale University and joined Brookhaven as an associate scientist on July 1, 1948. In November 1948 he was named an associate physicist, in 1954, physicist, and in 1961, senior physicist. He was granted tenure in 1957.

Alburger’s research activities at BNL spanned more than six decades, resulting in well over 200 publications, mostly in Physical Review. Thomas Ludlam, Physics Department Chair, said, “Dave was a consummate scientist, and one of the longest-serving members of the Physics Department. His hands-on, can-do approach to experimental physics was universally admired.”

The central theme of Alburger’s work involved studies of nuclear beta decay, the process by which a neutron in an unstable nucleus turns into proton (or vice versa) with the emission of an electron and an antineutrino (or positron and neutrino). These studies often required the detection of electrons — for which he built a number of spectrometers — and the gamma rays from the decays of excited levels in the final nucleus. In this way, many properties of the decaying nucleus (mass, half life, spin, parity) and final nucleus could be determined. Over the years, as accelerators and detectors improved, there were many firsts, meaning the studies of new isotopes, along with a steady accumulation of data on nuclear structure that theorists could attempt to explain.

Alburger’s experimental prowess attracted strong long-term collaborators with complementary skills, notably Denys Wilkinson, Oxford University and later University of Sussex, England, and Ernie Warburton of BNL, who both also excelled in theory. Wilkinson (already a Fellow of the Royal Society) came to BNL for the summer in 1958 (and in summer for the next 20 years). This resulted in an important paper on the beta decay of Berillium-11. All three were authors on four papers, out of at least 11 that bore Alburger’s name, published in 1963 (1971 and 1972 would be similarly productive years). Also involved in a number of the 1963 papers was Andre Gallmann from Strasbourg, another long-term collaborator, as the experimenters used small Van de Graaff accelerators at both BNL and Strasbourg.

Alburger was Group Leader for work on the 3.5 MeV Van de Graaff for 25 years from 1953. He was the primary author of a two-page proposal for a new Tandem Van de Graaff facility consisting of two MP tandems, approved in 1962 and completed in 1970. As far as beta-decay studies were concerned, the extra energy and availability of heavy-ion beams from this facility meant that a much wider range of isotopes could be produced and studied. In fact, more experiments were often needed to track down the origin of the wide range of activities produced by heavy-ion beams. Productivity soared.

Alburger later made useful contributions to the new heavy-ion program at the Alternating Gradient Synchrotron (AGS) (injected by the tandems), produced several compilations for nuclear data sheets at the National Nuclear Data Center at BNL, and worked in the medium-energy group’s hypernuclear program at the AGS. He also continued to work with BNL nuclear chemists, as he had periodically throughout his career, on the measurements of long half lives.

At the time of his death, Alburger was deeply involved in a benchtop experiment to detect the rare process in which a nuclear level decays by the emission of two gamma rays that sum to the transition energy rather than by a single gamma ray. Thousands of examples of this rare decay, which occurs about three times per million decays, have been seen since data-taking started in November 2010.

Alburger’s scientific legacy is a large body of precise experimetal measurements, many of which continue to be important, often for reasons not thought of at the time that the measurements were made.

A longtime resident of Brookhaven Hamlet, Alburger was active in local activities and affairs. He was an avid runner — at 82, he joined the 278 runners in the 2003 Earth Day 4-mile run at Brookhaven, clocking in at 51:38. Mary Mickle Alburger, Alburger’s wife of over 60 years, died in 2008. He is survived by two sons, David Reid and Andrew, and two daughters, Mary Jo and Eve. A memorial service will be held September 16 at 3 p.m. in St. James Parish Hall, Beaver Dam Road, Brookhaven Hamlet.

A more detailed article will appear on the BNL online Obituary Page.