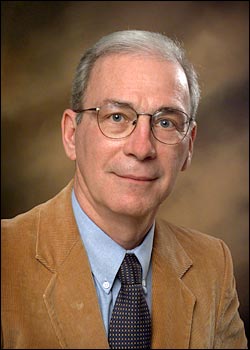 John Dunn, a senior scientist in the Biology Department, died on July 13, 2012. He was 68. A resident of Bellport, he is survived by his wife Orrell, his daughters Teresa and Heather, sons-in-law Joseph Gebbia and Michael Alpiner, granddaughter Emma Grace Alpiner, and his sister Mary and family.

Dunn joined BNL as an assistant microbiologist on July 1, 1972, after earning a bachelor’s degree from West Chester State College in Pennsylvania and a Ph.D. in microbiology from Rutgers University in New Jersey. On July 1, 1977, he was promoted to scientist with tenure, and on May 1, 1988, to senior scientist.

The following reminiscences and summary of Dunn’s 40 years of research at BNL are condensed and adapted from an article, “John Dunn, Scientist Extraordinaire,” by Bill Studier, former Biology Department chair and a longtime colleague and friend.

John’s wide-ranging scientific curiosity was evident in conversation, his questions in seminars, and his many scientific collaborations, which typically involved application of methods he had developed or adapted. Throughout his career, he pursued collaborations within the Biology Department and with scientists elsewhere. He had an insatiable scientific curiosity and passion for discovery. When he got interested in something he pursued it tenaciously, using any technique at his disposal, whether he had to develop it himself, learn it from someone else, or find it in the literature.

John always had an interest in medical applications and in the late 1980s, was approached by a high school student who had the idea that bacteriophages, viruses that infect bacteria, might be used as a weapon against the bacterium that causes Lyme disease. This idea went nowhere but got John interested in producing surface proteins of Borrelia burgdorferi as potential vaccines against Lyme disease. He immersed himself in many aspects of Borrelia biology, including genome sequencing and evolution, determining structures of outer surface proteins, and vaccine development, primarily through a continuing collaboration of more than 20 years with physicians at Stony Brook Medical School who specialize in treatment and research on Lyme disease, particularly Ben Luft.

When John joined the Biology Department, he had already published a ground-breaking 1969 Nature paper with R. Burgess, A.A. Travers, and E.K. Bautz elucidating the role of sigma factor (a sub-unit of E. coli RNA polymerase) in controlling which genes are expressed. His biochemical expertise was an ideal complement to genetic and physiological work underway in my lab on bacteriophage T7, which infects E. coli. We immediately struck up a collaboration to study how gene expression is controlled during T7 infection.

This highly productive collaboration led rapidly to the discovery that RNase III, an E. coli enzyme, performs the final step in producing messenger RNAs of T7, the molecules that carry information for making specific proteins from T7 DNA to the ribosomes. We further found that RNase III has a similar RNA-processing role in producing the ribosomes themselves. John organized the 26th Brookhaven Symposium in Biology: “Processing of RNA,” held in May 1974, which brought together people working on all aspects of RNA processing and is remembered fondly by many.

When DNA sequencing became feasible, John adopted Maxam-Gilbert sequencing to determine the sequence of the entire 39,937 base pairs of T7 DNA, a tremendous accomplishment in the early 1980s, which he and Willie Crockett completed in less than two years. The sequence allowed us to identify all of the T7 genetic elements, making T7 one of the best-understood bacterial viruses. This basic understanding enabled the harnessing of T7 RNA polymerase and T7 genetic signals to direct the production of specific proteins from cloned coding sequences in E. coli, a technology successfully licensed by BNL.

Over the years, John served on review panels for the American Cancer Society and the National Institutes of Health Genome Study Section, was an associate editor of Virology and since 1992, executive editor of Protein Expression and Purification. Among his honors were the 1984 E.O. Lawrence Award “for fundamental contributions...to the understanding of the mechanisms by which DNA is transcribed and processed into functional messenger RNA” and the 2001 Energy 100 Award for his work on Lyme disease prevention and diagnosis, both from DOE; the Waksman Institute Medal on the 30th Anniversary of the Discovery of Sigma Factor (awarded to all four sigma paper authors); and Honorary Doctor of Science from Long Island University, Southampton Campus.

John’s work was interrupted but not stymied for the last nine years by a continuing battle against cancer. His colleagues were devastated when he was unexpectedly felled by an aneurysm shortly after his 40th anniversary at BNL. We sorely miss his friendship, exuberance, and collaborative spirit.

An obituary and the full article by Bill Studier are on the BNL Obituary page.