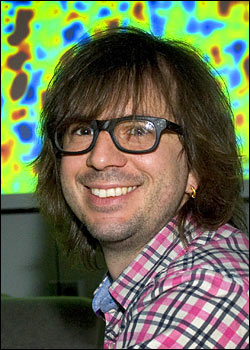 How do you get named one of the 10 most exciting and innovative young scientists of the year? Start by pioneering a new way to map the cosmos, a thousand quasars at a time.

"Do I belong in a list of the top 10 coolest scientists in the US?” Slosar asks. “I think the brilliance really belongs to the people that made the BOSS experiment a reality and the continuing support of the Physics Department management at Brookhaven who made our cosmology group happen."

Slosar may be modest, but his groundbreaking work takes a bold approach. He owes his spot on Popular Science’s annual list of genius scientists to a kind of backward astronomy that is helping his team measure the expansion of the early universe more accurately than ever before. Instead of the standard approach of measuring light emitted from galaxies, Slosar and his team focused on the intergalactic hydrogen gas that blocks the light coming from the brightest beacons out there – quasars.

Using one of the world’s largest digital cameras to look at the early universe, they mapped out what’s called the “Lyman-alpha forest” – irregular patterns in the spectra of light from distant quasars that are created when the light passes through hydrogen gas clouds. It's a bit like determining the shape of someone's hand by watching a shadow puppet show.

The Lyman-alpha forest is a known technique, but, “what BOSS changed is that you can measure so many quasars together, because the camera is so wide-field and the spectrograph is so multiplexed it can look at a thousand objects at a time,” says Slosar. “What it really adds, using these quasars as backlights, is that we can measure the universe as it was 11 billion years ago. That’s really revolutionary. There’s no other technique that can accomplish this.”

In 2011, Slosar received a $2.5 million five-year research grant under the DOE Office of Science Early Career Research Program for his inventive use of the Lyman-alpha forest to measure the makeup of the cosmos, and so far, his team has surveyed over 100,000 quasars, with results from the first 14,000 published already.

In the coming months, they will publish new results from 60,000 quasars, and by 2014, they hope to have observed 150,000 of these ultrabright stars. With a map that big, they will be able to explore further into the mysteries of the cosmos to measure dark energy, the unexplained force that is thought to be driving the accelerating expansion of the universe.