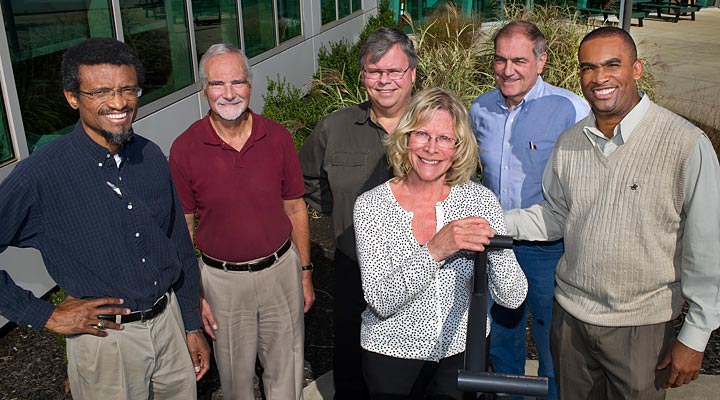 The longstanding BNL/Longwood Schools Mentoring Program, led by Omar Gould of the Pre-Injector Systems Group in the Collider-Accelerator Department, is looking for more mentors.

The program, initially set up by New York State, was started at the Lab in 1995 by Peter Soo, now retired. Gould explained that teachers in the Longwood School District identify students who need extra attention and who are then matched with BNL volunteer mentors of the same gender and when possible, similar interests. The mentors meet with the students once a week on a one-to-one basis to discuss whatever the youngsters want to talk about.

Said Gould, "The main goals for a mentor are to help a student value learning opportunities both in everyday life and in an academic setting, to introduce the student to the possibilities of various careers and work settings, to help the student learn about life in a work environment, promote growth in learning, and advise and teach behaviors that can lead to success."

Lisa Mato, principal of Longwood Middle School, strongly appreciates the program. "Having a mentor program has assisted our wellness team in reaching and supporting so many more needy students than we would have been able to do by ourselves," she said. "Thank you for that support. It truly does take a village and BNL is part of our village!"

"To help the students effectively, you must make a strong personal commitment because the children depend on you," Gould continued. "You have to be a good listener and have patience. The relationship of the mentor and student requires that the mentor be honest, respectful, supportive and have a willingness to share."

The reward of this dedication is absolutely worthwhile, Gould said. "Every year, we have reports from teachers that many of the children participate more in class, sometimes make friends with each other, and have better relationships with other students in their class." In addition, students are often inspired academically by their interaction with BNL scientists.

"I began mentoring a student through the program when he was in the third grade," Gould said. "We continued the mentoring within the program through the 10th grade. He needed additional mentoring events so we began meeting every other Saturday at his local library. After he switched school districts, we continued with the Saturday library mentoring sessions into the 11th grade, which is his current grade level. His mother expressed to me that he made the Dean's List in the fall of last year."

Mentors who are volunteering already on the program this year are Steve Coleman, Linda Commander, Michael Seidman, Peter Selgrad, and Michael Villaran.

Coleman, manager of the Radiological Control Division, shared some of his thoughts on mentoring and the importance of interaction with the Longwood students.

"From my experience and in many cases, children often dismiss the guidance and teachings of their parents," Coleman said. "I found that sometimes the external influence of others is very powerful in reinforcing the parents' guidance. In considering this, the mentorship program also allows me to help individuals improve their interpersonal and communication skills, and build their self-esteem, all of which are extremely important in today's environment."

Commander, who is a senior contracts specialist in the Procurement and Property Management Division, also hopes that other BNLers will join this group effort.

"This is my third year as a mentor at the Longwood School District," said Commander. "I joined the BNL group after attending a meeting with Omar Gould about the program. I have been mentoring the same student who is now in the Middle School. We started out mostly playing board games at lunch, with various discussions along the way. I found, just as with my own children, there are different stages as the years go by, and I do my best to keep the subjects interesting and pertinent to the age level. I would like to encourage people to join the group. In my experience, just a nice friendship can be uplifting and will be remembered."

Villaran, a senior research engineer in the Sustainable Energy Technologies Department, exemplifies the enormous impact a mentor can have. 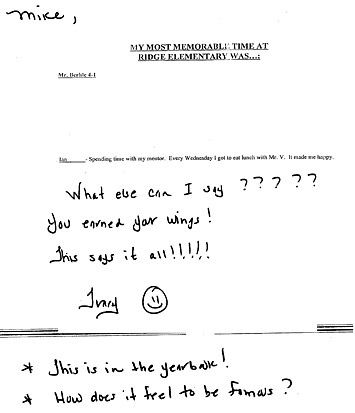 A report card on which Longood students were asked to indicate their most memorable experiences. One particular student, Ian, listed his time with Michael Villaran as his favorite memory.

"About 15 years ago, I was mentoring a nice little boy who had a very disruptive home life," Villaran said. "He lived with his mom, an older sister and her baby, and a younger sister. He did not know his dad. I started mentoring with him in second grade. During the time I was mentoring him, the family had to give up their apartment and move into county welfare housing all the way out in Southampton. In order to not disrupt his schooling, the school district bussed him and his sister from Southampton to Ridge and back again every day!

"He seemed to enjoy our weekly mentoring sessions, but he was not very demonstrative or animated, so I was never really sure how well we were connecting. His fourth grade teacher was encouraging, however, and often told me that the mentoring was helping the boy in school. The teacher several times thanked me for being a mentor to Ian and emphasized that mentoring was the only stable thing the boy had in his life.

"When the children graduated from the fourth grade at elementary school to move up to the junior high level, each child was asked to submit their most memorable experience from their time at the elementary school. All the favorite memories of the students would then be compiled in the class yearbook. I was very touched when the guidance counselor told me that Ian's favorite times in the elementary school were our weekly mentoring sessions!"